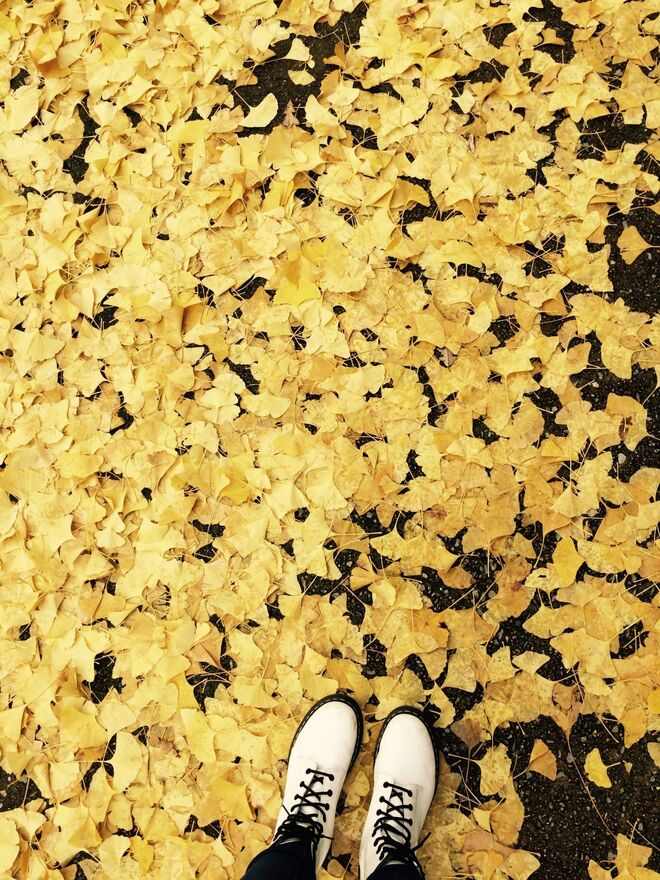 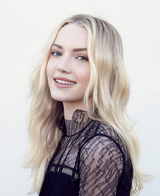 Being a constant dreamer, Katherine's imagination is boundless and sometimes even farfetched. It's surprisingly not too hard for her to keep her focus, but all she needs is a few pushes to stray thoughts to get her going. In her head, she's ruthlessly optimistic, but somehow her vocal chords always end up spouting realistic things, almost to the point of being a pessimist. Her inability to feel ashamed or shy of speaking her opinion more or less weirds people out.

She hones her artistic talent happily, but only does so with charcoal and crayons. Nothing else. Her art is an insight to her personality - complicatedly realistic, imaginative, and optimistic all at the same time with definite conflict. Her parents' divorce at age three caused her to become more mature than most kids her age. However, she is still confused on why her mother has stopped visiting, though to her understanding her father had something to do with it.

Generally, Katherine's quite nice to others (despite her lack of sugarcoating), and if given permission, will happily defend them in her own eccentric way. Her lack of caution and eagerness to try out new things tend to get her in strange situations. She's not a fan of thinking things through, but grudgingly does so. Her floaty, hopeful side is often nowhere to be seen; the sightings being as rare as Crumple-Horned Snorkacks.

Thinking and pondering things at random never cease to plague Katherine's action bar, and so she tends to come up with strange questions in class (which in turn, often gets her teased.) Her imagination's limits - or lack of - give her an easy grip on many spells. Quick wits and the inability to be truly surprised are assets are one can forever rely on her to wield adeptly. She enjoys learning new things - and come up with reality-defying theories for them - and one should never put it past her to know things she shouldn't. 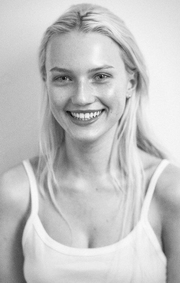 Nora Déonté and Jason Marxa had their daughter before their first marriage anniversary hounded them. Katherine fortunately did not require a C-section, and was born into the world without causing too much innumerable pain to her mother on July 2, 2014. Rather unfortunately, she only experienced three years of truly having a mother before the divorce whisked away any further possibilities. Jason won custody of her by some unfathomable reason and suddenly Katherine was forced to deal with the strange women her dad brought to the house. At age eight, the Christmas and birthday visits stopped completely, and it was her favorite topic to wonder/daydream/ponder about till she was eleven.

She liked none of them, and even played a prank or two (her unused paints turned out to be fantastic for defacing clothing). That is, until Ellie Tate came along. The latter was a sweet, "don't-get-TOO-fresh-with-me" woman who genuinely paid attention and interest towards the little girl. The two became fairly good friends, and Kate often thought that she was a way better parent than Jason ever would. However, Ellie could simply not replace Nora.

When she was in the 4th grade at school, at age 10, one of her classmates had a seizure and tumbled off the fourth floor. Everyone else screamed and panicked while Katherine rushed downstairs to hold her friend's hand as the life dwindled away from her. She didn't really realize it at the time, but she used magic to slow her classmate's bleeding. She stayed there, immovable, until the medics and the police arrived. It took some time to pry her away from the corpse, but she didn't shed a single tear. Not one. The next day she was perfectly normal, which weirded out her peers and superiors even more than before.

The incident didn't faze Jason at all when the school reported it to him, but it left Ellie concerned. Kate shrugged it all off, and nothing too disastrous occurred until she neared her tenth birthday.

Jason, Ellie, and her had been out to get Chinese food (which Kate often found weird looking and ended up shaping them into animals and feeding it to strays) when they got involved in a rather theatrical (in Kate's opinion) car crash. Ellie got out completely unscathed save a few minor cuts, but Kate and Jason were hospitalized. The former was completely confounded that the hospital didn't allow her to have charcoal. A whole bleeding hospital, and there wasn't a single stick of charcoal! The crayons calmed her down, but she never quite forgot the charcoal incident (that happily involved three vexed nurses as they tried to drag her back to bed) and took to carrying pieces of it in her pocket at all times.

At least, she reasoned, she would be capable of writing a farewell letter in the case she ever got stranded on some island surrounded by shark-infested waters. Jason and Ellie couldn't reply to that, and thus Kate's laundry had their pockets pulled out all the time whenever they were about to head to the laundromat.

During the mishap in the hospital and MUCH to Kate's delight, Nora visited. Jason was highly annoyed by this, which confused Kate because even a blind man could see they still had feelings for each other. Concussions and internal bleeding caused some problems for the daughter and father, but they both got out fine.

Shortly after, Jason acquired a generous job offer in Britain and they moved. Ellie came with them as her parents lived there, and the states were getting a little too crowded for her liking. Kate didn't mind the sudden move, and adjusted easily to the new surroundings in Stockport, England.

Kate's eleventh birthday brought new surprises, as a week after an owl swooped out of the chimney and dropped a letter on a somewhat drunk Jason's head, and then Nora visited to explain the situation.

Wonders never failed to cease after that. Kate was brought along to watch the Germerica match by Nora during the Quidditch World Cup prior the summer of her first year. It was the most fun she'd had in ages. Plus she witnessed the feeling of how to betray your country like that. It was amazing. She bonded by at least a margin with her mother, met a future fellow Ravenclaw, and nearly got her eardrums blasted off from all the screaming from the riots. Okay, so maybe they didn't get trampled to death, but still quite exciting.

It all ended too quickly for her liking, but Hogwarts came ahead faster than anticipated. As usual, the change was welcomed. Her father didn't bother to see her off, but she didn't really care, seeing as Nora had done so. Which was probably a good start off to the year.

Kate found out quickly in her first year at Hogwarts that drama was commonplace - thankfully through her classmates' involvement rather than her own. She quite enjoyed spending time at the Black Lake and the Owlery, and took to drawing the the grounds when she was feeling creative.

Care of Magical Creatures, Transfiguration, and DADA were her favorite classes while in school. She enjoyed the company of animals - often over that of other people - and her vivid imagination helped greatly with her skill in Transfiguration. She had a flair for DADA spellwork, and for using spells creatively in DADA-type applications.

She came out to her mom over tea one weekend, and the entire conversation was desirably underwhelming. Her mom simply said "Oh, okay," and took a sip of her tea. The next day, Nora gave Kate a chocolate cake with rainbow icing on it.

Kate transferred to Ilvermorny starting in her fifth year, where she was sorted into Horned Serpent. She had a bit of...British overload and missed America. Plus, she heard that Ilvermorny was on a mountain, so why the hell not?

She enjoyed Ilvermorny as much as she enjoyed Hogwarts, and graduated with high marks. After some deliberation - she was torn between becoming an auror and becoming a magizoologist - she joined the American Aurors, intent on becoming a Hit Witch.

She stayed in America most of the time after graduation, alternating going back to Britain to visit her parents and her parents coming to America to visit her. She's had a few girlfriends as well, and all her relationships ended on good terms - most notably a Magizoologist she worked with on a case. They were together for two years, even moved in together, but ultimately they went their separate ways. Kate's girlfriend had a once-in-a-lifetime research opportunity to work with dragons in China, and they made a mutual decision that a long-distance relationship was not in their best interests. They're still friends, though, and keep in touch.

During her second year with the Aurors, her mother and father got into a car wreck in which her mother lost her leg. Unfortunately Nora was treated at a muggle hospital where they had to amputate her leg. Ironically, that wasn't the most worrying part of the entire situation - there were moments where Kate almost feared for her father's life, but ultimately nobody died, and they all had a nice visit, even if much of it was in the hospital.

In her free time, Kate likes to make chocolate foods, and she often brings them into work. She has a small booth at the weekend market that she sells from, and her small business is called, quite simply, Giraffe, because she likes Giraffes. She dreams of one day opening a cozy cat café under the same name, specializing in chocolate-themed foods and finding good homes for great cats.

Recently, though, Kate has had a bit too much America, and - especially with the...distasteful regime currently in power - feels it's time to transfer to the British Hit Division. 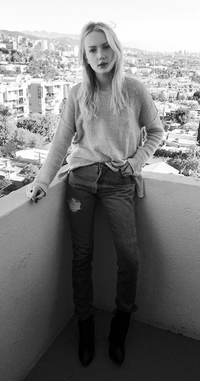 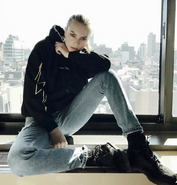 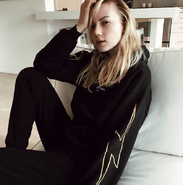 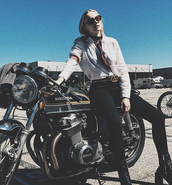 Add a photo to this gallery
Big thank you to Omnia for the foundation of this character!
Retrieved from "https://dumbledoresarmyroleplay.fandom.com/wiki/Katherine_D%C3%A9ont%C3%A9-Marxa?oldid=1075816"
Community content is available under CC-BY-SA unless otherwise noted.