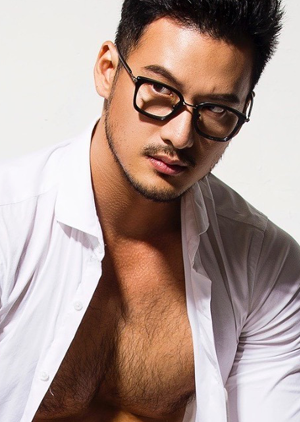 Kieran isn't in touch with his emotions at all. Preferring to be cold hearted and dark rather than giving in and having feelings. Although he'll pretend to have emotions to entice his victims, his heart is as cold as ice and deep down he feels nothing. The last time he really felt any sort of emotion was after killing his dad, which the normal response would be sadness but instead he was happy. He can manipulate any situation in his favour and he'll have no remorse doing it whatsoever, whether it be through words or his body, Kieran will find a way to manipulate you.

Kieran's razor sharp focus when it comes to things he's passionate about is almost frightening. Granted he's only ever passionate when he's about to turn someone into his next victim, the look in his eyes is truly terrifying and one most would never want to see again. Something takes over him and it's almost like he gets off on the fear he instills in others when they realize he's about to kill them. While creepy to some, Kieran has always had a strange fascination with serial killers, death, and murder. With that in mind it makes sense as to why he's as messed up as he is. That accompanied with how he was treated as a kid it was only a matter of time before Kieran snapped.

Pure-bloods Hung Cai and Liao Ai were seen as an upstanding wizarding couple in their magical community in Taipei, Taiwan. Although young, they were seen as the perfect couple, their marriage being desired by many. Some knew that longevity would be blessed to them whilst others were sure that, with them as the patriarch and matriarch, they would be able to create a Hung dynasty that would be powerful in the community. Both had aspirations for that too; the Liao family were fairly prominent within the Taipei magical community and she wanted to prove that her marriage into the fairly unknown Hung family was a better choice than the rather cliche wizarding families that her sisters married into. And, for sixteen years, Cai and Ai were on their way to becoming the favoured family.

The dreams of having a large legacy was stopped in it's tracks slightly at the birth of only a single son, Kun. No matter how many times they tried afterwards - even falling victim to countless miscarriages and stillbirths prior to Kun's birth - it seemed as if they would only have the one child. At first they felt it was a curse, a bad omen of sorts but eventually decided that it was a blessing. They decided that if Kun was to be their only child then surely he'd be capable of great things; an idea that they were keen to drill into him. During his early childhood, Kun was fussed over and was given a lot of luxuries, all done in the hopes that he'd grow up into the person his parents were attempting to project onto him.

The spoiling continued into Kun's later childhood; he constantly was able to get what he wanted and, thanks to being homeschooled, had all the attention in the world from his parents. However, all the attention was superficial. Instead of playing to the character Kun was trying to develop for himself, Cai and Ai continued to project a noble child persona onto him and would orientate their spoilings towards that. Consequently, Kun grew up with a void of emotions, almost being able to play to a certain one at any given time but lacking an all-rounded comprehension of how they should work together. To anyone else, alarm bells would've rang but, for Cai and Ai, they just saw their prophecised son forming in front of them. To their detriment, especially in later life, they crushed any attempts of Kun being rebellious. What started as a prohibition of their treats and luxury goods turned into acts of physical violence until, when they felt it got out of hand and Kun strayed too far from their glorified image, they'd use spells to tie him up and punish him. Though becoming seriously broken on the inside, Kun put up with it and the void of emotions only grew.

Kun grew up to have one escape, however. During his first magical experience at the age of seven, bursts of flames came from seemingly no where as he played in the backyard. Sadly, a stray cat was largely the victim of the experience and Kun watched as the animal succumbed to the flames, dying before him. Seeing it made something click in him; an interest that would later grow into an obsession with death formed. From then on, Kun played doctor to ants and other bugs, conjuring up plans on how to execute the stray dogs and cats of the area. With now learning ways to hide things from his parents, he made sure that neither of his parents found out about his growing hobby. In reality, their intervention was crucial; as he neared 11 years-old, the fascination shifted from animals into people. It was as innocent as the whole notion could be - just a fascination with what happens after someone was to pass away - but with the lack of force to stop it, Kun was heading to a dangerous place.

At the age of eleven, Kun received his letter of attendance to Mahoutokoro and happily went, glad to be away from the exhaustive expectations of his parents. Though he found learning about magic interesting, Mahoutokoro became a place where Kun could fully explore his potential with death. With the knowledge of spells, he was able to attack various animals, then blaming it on failing a spell. His obsession grew and, thanks to charms, he found himself being able to create scary amounts of plans on how he'd kill. A reputation formed around him at Mahoutokoro as the weird kid that nobody really wanted to talk to - not that he minded, made things easier. At home he played a little more to the image his parents had of him, making them believe he was growing into an upstanding wizard. Little did they know, as they continued to praise him, that he was close to snapping thanks to the abuse he had experienced earlier in his life.

On his sixteenth birthday, he visited his family home away from Mahoutokoro and had intended to spend the weekend with his family and, as ever, play to their expectations of him. However, the more time he spent, the more his vision was clouded with all the perfectly planned killings he had. Whilst they were never directed at his parents when he wrote them, he found that his parents could work perfectly as the victims in his master plan of killing someone and making off with their money. Having studied English purposefully so he could move and erase his old identity, he knew that if he could pull it off, the euphoria would be amazing. Even until the final evening Kun had no intention of his parents being the victims of said plan but, when his father disciplined him with a stunning spell paired with a jinx that caused painful boils to appear on his arms, Kun snapped.

He deliberated with himself the various ways he could kill his parents, wondering if he should kill them separately or together, using the same method or differentiate it, before deciding that he had to be just in his killings. Although he was void with his emotions, Kun had a soft spot for his mother. She was far more encouraging of him to be his own person - albeit not much but significantly more than his father - and he never missed the ways she winced as his father would use spell after spell on him. For her, he used an undetectable poison in her drink that he had brewed after finding old potioneer's books in the Mahoutokoro Library. Her death was quick and painless; she sipped the tea with the poison in and he made sure to give her a kiss and make her feel good before she passed. Though the soft spot for his mother was a thing, Kun felt little remorse and shoved her body in the closet of the room she died in. With his father, he used a rope conjuring spell that strangled him to death, slowly and painfully. The way the spell rendered him useless allowed Kun to use a barrage of other spells; hexes and jinxes that allowed him to explore the pain. From wound creating spells to jinxes that caused hives, Kun was ruthless with his father and, by the time he passed, he was almost unrecognisable. Just like the rest of his plan, Kun slipped away with the family fortune and made a break for Britain. Masquerading as a muggle going on a trip to Britain as a tourist was a lot easier than he had thought, thankful that the preparation was quick and less strenuous than he imagined.

In the UK, Kun took up residence in Lil Bundles and assumed the name Kieran. Now going into sixth year, he was sorted into Ravenclaw. The killing of his parents had subdued his urge to kill, only long enough until he graduated. Upon graduation, he took a liking to the Dark Arts and Knockturn Alley became a frequent place of his. It was there that he met and formed friendships with Rosalie Hemmingway, Melaena Vasilyeva, Christopher Halstrom and Hailie Zhang. By then, a blood lust and love for blood had returned to Kieran and it was him who first mentioned the whole possibility of killing, shifting their conversations from the Dark Arts towards murder. Together, the five devised a plan whereby they could become the most notorious killers in the recent British magical history.

Retrieved from "https://dumbledoresarmyroleplay.fandom.com/wiki/Kieran_Hung?oldid=993262"
Community content is available under CC-BY-SA unless otherwise noted.