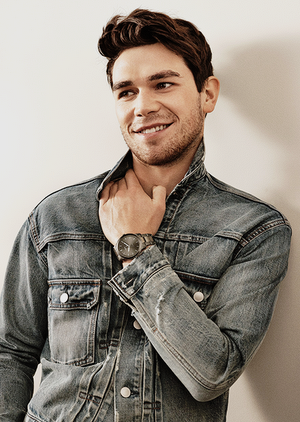 Kingston is perhaps the one amongst the triplets that could fit the description of 'average.' He is, by no means, not plain and average but there is a lack of dynamic within him that his brothers possess. Many have said, in true Gryffindor fashion, Kingston really shines in the face of fears and being courageous - he was, after all, known for attempting the most daring moves during Quidditch games. Other than that, Kingston enjoys being calm. Though perhaps not tall enough to be considered a true gentle giant, Kingston very much embodies the whole essence of the term. He prides himself on his friendliness and mellowness, liking to think that he'd be the friend that nobody would have any troubles with coming to him for help, reassurance or just to confide in someone. Although he might be the self-designated shoulder to cry on, therapist-acting friend and guy who can't get enough of cuddles, Kingston does have some energy within him that his brothers exhibit much more frequently. Friends can liken his bursts of energy to something that needs to be recharged; Kingston can be loud, excessively sarcastic and the life of a party but, consequently, he'd go into a recluse-like state to regain the energy. Moreover, Kingston enjoys a dry humour, sarcastic and tongue-in-cheek. His jokes are, more than likely, stolen from muggle comedians he sees on TV. Honestly, an apt way to describe Kingston is a man who'd rather spend the night watching a movie with his significant other, cuddling their puppy together and ordering a takeaway. Wholesome? Wholesome.

True to his personality, Kingston tends to handle negative emotions with some sense of rationality and patience. Though he lets people vent to him, he himself is adverse to doing the same. When asked, he cites not wanting to be burdensome on anyone as the reason why but, in reality, it comes more from the fact that Kingston would rather he keep them to himself. Although his friendliness is a prideful part of his personality, Kingston can equally hold a grudge should he deem the person in question deserving of such a thing. When holding a grudge against someone, Kingston's words become more venomous - should he speak to them at all - and it's obvious to figure out if and how mad Kingston is with someone. When it comes to sadness, that's what Kingston truly hides. Though he's fortunate that he finds it had to be disheartened or saddened by things, whenever he does, he feels as if he shouldn't have to tell anyone and would much rather write it all down and keep a log. He's not the diary or journal making type, but he likes to have a record of how he felt on any given day so he can reflect on it and ensure that he won't feel the same sadness again.

Normandy Paea was always a bit ambiguous in the Samoan magical tribe he was in. He was never constantly on anyone's radars for good or bad reasons alike, but neither was he completely forgettable within the community. For the most part, he was just there. People were content being his friend but in the same breath, people were fine with not knowing him whatsoever. He never paid much mind to it and quite happily lived his life as usual. When the Paea family became the talk of scandal, Normandy found himself changing. Coming from a large family of five boys, including himself, and four girls, it was largely inevitable that one of them would challenge the good reputation their family name held. One of Normandy's brothers had gone on a rampage, abducting a teen girl within the tribe and murdering her before taking off, leaving what many believed to be a list of victims. Nobody, not even the Paea Family, knew what to make of it, nor did they know what had led to the point in question. Quickly Normandy went from being an indifferent presence to someone of interest, much like his family. He handled the scrutiny for a few years before moving away to Wellington in hopes that he could distance himself from the reputation garnered on Moutohora.

In Wellington, Normandy met Emily Boskitt, a muggle-born witch who seemed to not share the same intrusion on the Paea Family as a large number of witches and wizards continued to have in Wellington. A friendship the two shared developed further until a relationship flourished. Emily was, for all intents and purposes, the perfect partner for Normandy. Besides having her personality meshing well with his and the two being able to achieve 'couple goals' status, she didn't share the same prejudice that some people did on the Paea Family. She knew of the crime, but then again, who didn't? It was a large profile case within the magical Kiwi community. Some magical media just lumped the entire family together; somehow, in one article, the Paea family became a group of people who just influenced on another to do prolific crimes, despite evidence against that (truth serums on the family to prove they had no such idea) being available and just as known. Emily saw through it and stuck with her husband. Their relationship continued to flourish until the two got married in a small ceremony that overlooked Moutohora.

The two managed to live a fairly reclusive life in Wellington; the grip of interest surrounding Normandy's brother was beginning to die down as no new leads came in and, subsequently, peace was given to the Paea Family. Normandy was able to get a job in the law enforcement branch of the New Zealand Ministry and swore he'd get to work at making sure what his brother did could never happen again. It seemed idyllic, enough so for Normandy and Emily to give birth to their first child, a little girl named Kaliana. Perhaps bad luck was on the Paea's side but, following the birth of Kaliana, Normandy's brother resurfaced with a few more murders. Harshness on the family returned and, figuring it was the only choice at some form of a peaceful life, Normandy and his family moved to the United Kingdom upon transfer to the British Ministry.

In Britain the case had been heard about but Normandy and his family experience a sense of levelheadedness, as if the British magical public saw the results of the truth serums and dismissed all attention away from anyone but Normandy's brother. It was here that the family began to flourish once again. Emily was able to open a small shop in the Carkitt Market that was known for being quaint and quirky. A few years after the two settled in the UK, Emily fell pregnant again, this time with triplets, and eventually gave birth to three sons; Kingston, Kye and Keaton. For Normandy and Emily, they felt as if their family was complete. Whilst Normandy's place within the ministry and Emily's store in the market were very much focuses, attention began to turn towards creating the perfect, unified family. This was emphasised especially on Normandy's part as he had come to believe the 'black sheep' and shy character his brother had adopted was largely to blame for his path in life.

The triplets had what could only be described as a normal childhood. As per Emily's request, the three attended a muggle primary school much like their sister and magic had a lesser role. There were always hints of it thanks to the occupations of both the Paea adults but it wasn't an upstanding part of their childhoods. To fit the theme of their muggle childhood, the Paea children were told that any and all magic were the result of common mythical beings; the Tooth Fairy, fairies in general and Father Christmas. Of course, being young children, none of them disputed it which made their first magical experiences at seven all the more, well, magical for them as they briefly believed that they too were on the same magic level as Santa. The day of their experiences is what can only be described as a day of true commotion. The three worked in conjunction with one another; whilst Kingston happily made the chairs of the dining room table levitate and cause some damage to the decor within, Kye seemingly went on a water balloon controlling rampage (to which poor Kaliana was the victim of) and, finally, Keaton's homework had burst into flames. To say the least, Normandy and Emily's damage control was far worse than they had ever imagined. Still, there was some relief in that magic could begin to move away from the secrecy it had within the household.

As they grew up and got increasingly acquainted with magic, the boys anticipated going off to Hogwarts, especially when their sister had gone to Hogwarts to begin her magical education. Though they still loved their muggle education and muggle friends, each of the boys were finding the wait until they could be at Hogwarts themselves more and more strenuous. Eventually, at eleven, the three received their letters and happily made their way to Diagon Alley, finally being able to see their mother's quaint shop in person and being able to begin their magical lives. The three went to Hogwarts and - in respective to their names of Kingston, Kye and Keaton - were sorted into Gryffindor, Hufflepuff and _____. Ecstatic was only the most basic word one could use to describe their feelings regarding the whole situations.

Throughout their time at Hogwarts the three became model students. Each excelled in their own respective subjects and Quidditch was something the three had grown to love; playing and supporting at different intervals throughout. None of them left Hogwarts with particularly shocking grades and the chance for a good career was one that all three of them could take. Now facing the real world, the triplets are beginning to settle down after the newly-grad lifestyle and are ready to begin their lives.

Retrieved from "https://dumbledoresarmyroleplay.fandom.com/wiki/Kingston_Paea?oldid=1006741"
Community content is available under CC-BY-SA unless otherwise noted.