Most trademark qualities that used to make up her persona - the aggressiveness, the impulsiveness, the lack of coherence - have waned over time. In its place lingers a sense of maturity easily witnessed when in sight of Lucille Beauvilliers. A lot more weight is placed behind her thoughts and actions, and very rarely is there a display of hostility or aggression from her. She's a lot more calculated and methodic than she used to be, and Tessa could only gap at the openness Lucille exhibits. She has no qualms with being sincere about who she is, although she's done what she can to shroud her very questionable past. However, when all is said and done, Lucille is a much kinder version of who she was as a child. She's more sympathetic and willing to understand other people, versus her previous apathy and desire to wreak havoc regardless of the emotional and mental impact on others.

Although she still struggles with the concept of ignorance, ever the scholar, her brilliance shines bright when she approaches such moments with a clear headspace, positive perspective and everlasting enthusiasm to achieve an ideal, equally beneficial middle ground. While it was something Tessa prided herself over greatly, Lucille is a lot more humble about her achievements. Nonetheless, she also has grown to understand that commemorating her achievements is also a positive thing, as exemplified by her children, hence why Lucille carries herself with great confidence in herself and in her abilities. She's a very powerful woman even without dark magic or breaking the law, and it's bearing this in mind that she carries herself. Further, Lucille is still very ambitious. However, a great difference is how she approaches her goals. No longer working in selfish ways, she's a lot more receptive of criticism and is open to the notion of working with others. It's very rare for her to prefer to waste her life away in solitude, given all the recent developments. She still has her reluctance, what with her other issues, but it's something she can and will work through.

Do you remember the good times?

Once and yet again, her history is marred with a lot of death and angst. You’d think the kind of struggles she’s gone through would make her give out, but she’s persevered. From her birth one dreary night in the Scottish Highlands to her abduction and memory loss, from attempting to burn the Citadel to inheriting the keys to the most infamous dark arts organization to grace the United Kingdom, Lucille has gone through much yet has found her peace with it all. She has never been one to heed much mind to the memories of her past, so it must come as little surprise that there aren't many left to antagonize her over it. Those that are of concern, she’s all too happy to silence. She's reformed over the years, this is true, but the apple doesn't fall far from the tree, and if there's anything Lucille has learned from the people that raised her, it's that once you've become a part of something greater than you, it tends to stick with you for the rest of your life. Looking back on how her childhood shaped up, she supposes she should have expected her life to turn out accordingly.

Her magic became apparent at a young age, with Tilly Evans being the object of interest. Lucille - or Tessa, as she was known then - was smitten, and held no regards for safety if it meant impressing the other girl. To this day, the memory is still very clear; the sunflower she'd produced to offer to her. It was a sweet moment; one of the few she'd ever experienced. After that, her life accelerated, and most of her memories are but a blur. She remembers her adoption and the traumas she suffered as a consequence, but even at that tender age, Lucille knew to stick it out. Even though her traumas followed her, tantalizing her even in her dreams, Lucille is proud to say she maintained herself mostly indifferent. Stabbings, Russian Roulette, abandonment, deaths; all reminders that she needed to pull through. If not for herself, then for her then all-encompassing sense of loyalty towards an organization that cost her everything. Following her early graduation, which commemorated her as the youngest Hogwarts alumna ever, she became a full member of The Black Parade and developed newer, more useful skills with the help of other members, such as legilimency and occlumency. She still had the not-so-proverbial chip to deal with, but it became abundantly clear over time Lucille was in a race against herself. To grow, to mature, to ensure she learned and avoided making the same mistakes that had defined her parents' lives.

It was her need to prove herself grown that landed her with what she holds to this day is her greatest gift in life: her children. Birthing Claire and Fabian was one of the most challenging things she ever had to do, which is something worth acknowledging given her successful endeavors as a seventeen year old to find her parents' killers. Cross-continental treks barely hold a candle to the pain of natural birth, it seems. Nonetheless, it was their arrival that lit a new fire in Lucille. It was then that she let go of the girl she'd been, so naïve and foolish, wanting only validation from people that refused to give it to her, and became the woman she is today. It wasn't as seamless of a transition as she'd initially believed, but one she made nonetheless. She severed ties to her past by severing the arteries of those who posed the biggest threat to her new identity, and created a new image for herself as a vicious businesswoman. Using her inheritance from all its sources, she created a base for her new life. Several investments later and Lucille has single handedly managed to turn her life around, given some relapses here and there, and become one of the most notable businesswomen out there. Much can happen in the future, but Lucille rests easily knowing she won't be so easily encroached by that young girl with a stone cold heart and devil eyes.

Given [ Lucille ]Saint Lucia was a 4th-century martyr from Syracuse. Middle [ Marianne ]French and Czech form of MARIA. Surname [ Beauvilliers ]Ancient French family belonging to the country around Chartres 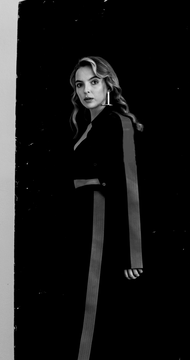 Retrieved from "https://dumbledoresarmyroleplay.fandom.com/wiki/Lucille_Beauvilliers?oldid=1078356"
Community content is available under CC-BY-SA unless otherwise noted.