1.What was your first incident of magic and how old were you?
"My first instance of magic was when I was nine, nearly ten? Maybe a couple of months before my tenth birthday. My maths is always so off? Is that even maths? No, just concept of time. I don't have much of one. But I accidentally set my father's office on fire after he grounded me. I...well, he caught me writing too a squib and that's a big no-no. So I broke into his office. I just wanted to make a mess, but I was so angry that the next thing I know his wooden desk was on fire and then everything else just went ka-boom. I ran into the garden and it was the squib gardener who found me the next day. I told people I just knocked over a candle. I...I didn't want to be a witch. I hoped it was just a fluke."

2.Do you believe in love at first sight?

"I like to think it does exist. Maybe without you realising it. I don't know. I don't think I fell in love instantly. But I think part of me did-subconsciously. It just took me years too realise it. And...it hasn't done me that well, I guess." Luka broke off to shrug halfheartedly, her eyes flicking here and there, not settling. "I don't know. I really, really don't. The romantic in me likes to think it does but realistically, probably not. I think you need a solid foundation to fall in love properly. If you want to make it last, you need to befriend them first. So I suppose...no, love at first doesn't exist. But it's a nice thought."

4.What is one activity that helps wind you down? Alternatively, what is one activity that does the opposite to you? Is there more than one, if so-what?
"I walk a lot. It lets me gather my thoughts. I also keep a diary. Just...activities that let me organise my thoughts. Give me a space to relax. I'm not a person that is cool under pressure, you know? I'm not very good at sports or politics. I tend to just push myself into overdrive and just...well, collapse. Mentally. I've never collapsed physically. I don't remember the last time I was sick let alone faint. I scrapbook as well. I like scrap-booking. And study. I don't like being stressed so not keeping up with school? It doesn't work for me. By the time exams roll around, I want to be prepared."
5.Were you close with your family growing up? If not-why?
"No. If you want the truth. I wasn't. My sisters were sent abroad to study so I rarely saw them and they rarely wrote to me. At least, not as much as they did with one another. Considering our age gap, I don't exactly blame them. But, you know, considering how my dad was...I can't help but feel a little bit resentful about how long it took the both of them to...you know, figure out what was happening. It's not their fault. It's not. But you know..." Luka shrugged. "I never met my mum. Died during childbirth. My dad, though, well I'm pretty sure he killed his first wife so you can tell what type of man he was. I don't think I ever want to see him again."

6.If you weren’t raised by your parents, who did? How did you find yourself in this position?
"So yes and no. Technically, up until like five years ago I was raised by my dad. However, due to reasons, my sister was able to gain custody of me. Eden, that is. Not Flo. My dad was caught and charged with child neglect and abuse. I don't think I need to go into any more detail. He wanted me to be better than everyone else. Instead I preferred to hide away in my books. So he became resentful I wasn't the perfect child and that my sister's were actually becoming the children he wanted me to be. And considering that they were Lestrange's....that didn't sit well with him. So Eden got custody of me. And it's been a lot better."

7.Where do you see yourself in ten years? "Married. I want to be married in ten years. To who?" Luka broke off as she slipped into her mind. The face Luka saw whenever she fell asleep. "I'm not sure," she lied. "Someone who loves me for me. It doesn't have to be a perfect relationship but someone who accepts me for who I am. I know twenty six is usually pretty young to marry but...I don't want to wait. Who knows what's going to happen? Career wise? I have no idea. Maybe I'd like to work in Lil Bundles. Or become a historian. I don't know. I'll figure it out."

8.What were you like growing up? "Quiet. I was very quiet. I think people thought I was mute. I preferred to hide away from the world. Only one person really brought me out. Hm? Oh, right. My friend, Roma. I met her when I was a kid and I use to try spend all my time with her. Then my dad found out she was a squib and...well, I didn't really see her again until a few years later. I rejected magic. I didn't want to go to hospital. I use to dream of running away from this world. I don't know if I regret not running away. Maybe I still will."

9.Who/what was the biggest influence growing up? Why?
"As much as I hate to say it-my dad. He was the one who I spent the most time around. He taught me...well, he taught me how to treat and speak to myself. They say your parent is the one who moulds how your inner voice sounds like, so you know...maybe why I'm always so hard on myself is because of him."
10.What was your childhood dream? Why so? And why did it change?
"I wanted to be a vet. I wanted to work with animals. Animals were always nice to me when I was a kid. So much more different than people. So I wanted to do something with animals. Why did it change? I...I don't know, really. I grew up, I guess. I don't have any pets anymore. Though I do like care of magical creatures. My grades in that are superb. But all my grades are, so it doesn't really say much."


11.Do you believe people can be given a second chance?
"It depends on what they did. But even then? No. If you did something the first time then who's to say you won't do it again? I don't want people breaking my trust or doing something I'm uncomfortable with. I can just find other people who won't screw around with my emotions. Why bother wasting my time with someone who'll just do it again? But then again-if it's something small, like, I don't know, forgetting to cancel then I guess I can give a second chance. But don't do it again. But with things like lying or talking smack about my friends? Cheating? Constantly making me wait? Sorry. No thanks." 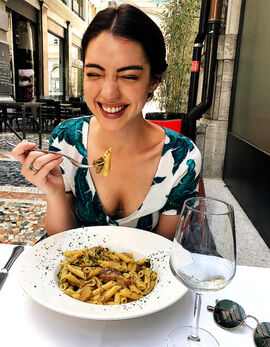 Retrieved from "https://dumbledoresarmyroleplay.fandom.com/wiki/Luka_Belfrey?oldid=1077783"
Community content is available under CC-BY-SA unless otherwise noted.