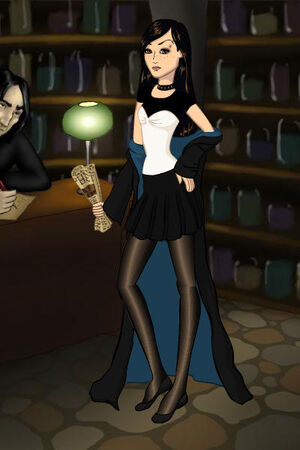 This character is roleplayed by SkyTimeGirl / Lead The Careers

Lyndsay is pale with long, straight, dark brown hair and freckles. She is extremely skinny and is mostly seen wearing tights. She has a silver piercing on her left eyebrow which she constantly changes.

'Lyndsay' means linden trees near the water and 'Bethan' means consecrated to God.

"I've stuck my neck out - I've worked three jobs, broken the law whilst doing it and I'm still not in? What kind of mother are you?
—Lyndsay speaking to her mother

Lyndsay Bethan Willis was never accepted as one of the family. Originally from Wales, she led a life of crime before finally settling down, unwanted by her mother and more of a mother to her three younger siblings. Her father was killed in a tragic accident before she was born, then she was neglected by her mother, who became ill with grief; she then went on to have unexpected triplets which left her exhausted and mentally ill. Lyndsay was left to look after all three of her new siblings and even had to get three jobs when she was nine as a papergirl, a shopkeeper and a flyshopper (someone who illegaly sells things on the side of the road). When her mother recovered two years later, she finally understood the pain Lyndsay also went through and, still a little bit unkeen, let Lyndsay in.

Cadewyn Arnold Willis lived just like Lyndsay - left out and a life of crime. She finally settled down with a boyfriend and fell pregnant with Lyndsay who was born later. Unfortunately, Lyndsay's father died just three days before her birth. Cadewyn lost her job soon after having Lyndsay for personal reasons and struggled to cope with no wage coming in. She decided she needed a night off so she got drunk and that ended with a one-night stand, but that dropped her with triplets. When they were born, Cadewyn fell ill and was diagnosed with a severe case of depression.

"Where's daddy?"
—Lyndsay when she was younger

"Ugh...I'm staying for another drink. You're paying."
—Lyndsay on a booze cruise
When Lyndsay was rejected by her mother, she couldn't cope, and she ran away and entered a life of crime. Drinking (despite being underage) and several stupid, life-threating acts which includes jumping from a church roof onto the car below and ending up in hospital. When she was eleven, she was found by an old witch who recognised her magical talent and immediately put her name down for Hogwarts without informing Lyndsay, then snatched her in the middle of the night to take her to the castle. The headmaster was not impressed at the old witch's move and sent Lyndsay back where she saw her mother for the first time in a long time.

When at school, Lyndsay was bullied terribly for always coming in with scruffy hair, no uniform and always smelling of sick. The teachers knew why so she didn't get in trouble, but the students didn't. She always skipped classes to avoid the bullies and just swapped schools when she got bored of one. She failed all of her tests.

Lyndsay has lost the most house points for her house but she's not ashamed. Her first year was a blur - she didn't have a clue what was going on, missed all her classes and failed all her tests. The second year, Lyndsay tried to tidy up but then she met Alicia Jonnes and her troublesome side boiled over. She often hexed Professors when they weren't looking and just escaped being expelled. Her third year was prank-year; she learnt several jinx and hexes and tested them out all over the castle. Her fourth year was the year she met Ashley and they become partners in crime. She's now in her fifth year - OWL year - and she bloody hates it.

Lyndsay is on the team as Beater, and she's very good at it.

Lyndsay has had several different relationships, but now she is starting to question whether her love lies with boys or with girls. Lyndsay is wondering whether she's straight or bisexual, and right now she is unsure - she'll still trying to work out how she feels.

Tom is a Muggle who Lyndsay went out with for a year before breaking up because Lyndsay fell out of love for him. He was a handsome bloke, with sandy-yellow hair, gorgeous eyes and a sweet smile, but it was when she met Laura that she realised he just wasn't the guy for her.

Laura is a Muggle who Lyndsay has known since she was eight, when she joined art class. The two girls got along instantly, with the same personalities, likes and dislikes. They shared their secrets and when Lyndsay told Laura all about Tom, Laura gave her the right advice to a happy life.

"I'd give up right now, girl. I've got this in the bag.!"
—Lyndsay talking to her competition

Despite not looking it, Lyndsay is a brilliant artist. She was enrolled in art school for a few months

1 of 4
Add photo
before being thrown out for stinkbombing the receptionist's desk and other stuff that was really bad. She found her love for drawing and painting when she was eight, and was chosen by the class to enter an art competition. She had to design, sketch and make a model of a faraway place no one knew of. Lyndsay drew a large, majestic castle with a silky black lake. She was in a battle with some other girl from another school for first place, so the competition director said they now had to paint their chosen place. Lyndsay bagged first prize easily. Little did she know that the faraway place in her mind would soon become reality.

"Chapter 2 - Childhood. God, this'll be a long one."
—Lyndsay writing her autobiography

Lyndsay loves to write. Next to drawing, it's her favourite thing. She has got hundreds of stories she never got round to finish. Now, in the magic world, Lyndsay can write without ever picking up the pen (provided she used the right spell, of course). She's currently working on her autobiography.

Lyndsay has actually got a beautiful singing voice. She hates singing, though, and will only sing if she has too. She has rejected several lead parts just because of her singing voice. She also plays the guitar and writes her own songs which she practises when everyone has gone to bed.

Lyndsay doesn't take to critisim very well after her life of crime and constant bullying. She's beaten several people up because they've called her names or insulted her.

Retrieved from "https://dumbledoresarmyroleplay.fandom.com/wiki/Lyndsay_Willis?oldid=964155"
Community content is available under CC-BY-SA unless otherwise noted.