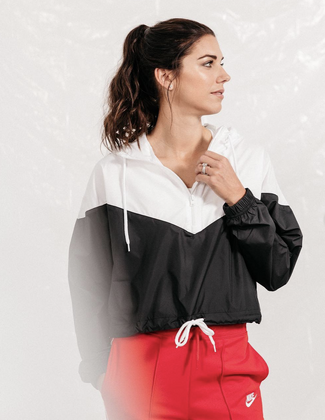 In another life, perhaps Mackenzie would've made for a very laidback mother with the occasional tendency to fuss over her children for pictures and whatnot. Unfortunately, this isn't another life, and Mackenzie has had to cope with it with very little help outside her small family of four. This means she's developed a very intense instinct to protect her loved ones, which at times can be a little overbearing. She'd endured a lot of suffering, and she just doesn't want to go through that again, even if the cost of it is a reprimand or two from the people she doesn't want to see getting hurt. She means well, she truly does, and she only hopes you share the sentiment. For someone who has endured as much as she has, though, Mackenzie has been persistent. She's persevered in spite of the obstacles that for many would be too great to push through. She's nothing if not relentless, and is capable of looking past what could go wrong in favor of focusing on everything that could go right. She may be realistic at times, but she's clinched this undying optimism that has remained prominent in recent years. If she's been able to go through everything she's gone through, then she can get through pretty much anything; it's just a matter of finding the silver lining in every circumstance. A matter of holding onto it and using it to pull you through. Mackenzie is as passionate as she is protective. You should see her in the field; she's unyielding, unforgiving, and ruthless. While she isn't necessarily a callous person on a day to day basis, there is no better demonstration of how unsympathetic Mac can be than when she's giving into her tendency to get very competitive. Usually, however, she's very easygoing and quite affectionate.

Elizabeth and Angelo were Hogwarts sweethearts who fell on some hard times post-graduation. Firstborn child and only son Oberon was a surprise, unplanned shortly after the couple had graduated. The first several years of Oberon's life were lived on the verge of living in poverty, with both of his parents working paycheck to paycheck as they paid their dues in the world before being able to move up in their careers. As they did so, the couple entertained the idea of having a second kid, and it wasn't too long before Elizabeth was pregnant with their second child, daughter Mackenzie Valentina, who was born when Oberon was 10 on one 16 July 2015. Oberon took to being an older brother and knew that protecting his kid sister was something he'd be charged with for life. It was something Elizabeth and Angelo always marveled over; when life got tough for them, they could trust Oberon to watch over and tend to Mackenzie's needs. He might have been 10 years older than her, but he loved her fiercely, and Mackenzie idolized nobody more than she did Oberon.

When he left for Hogwarts, Elizabeth and Angelo recall Mackenzie being distraught. She was young, and afraid, and didn't like going to sleep without her brother's bedtime stories or hugs. While she learned to make do with her father's stories and hugs, it wasn't anything like when her older brother came back home for the holidays. As far as she was aware, he had hung the moon and stars. Nevertheless, time passed on and she learned to adjust to a life where Oberon was only present for three months every year. And, as she grew more and more independent, she began pursuing her interests. Living in the muggle side of London, Mackenzie was required to attend muggle primary, where she met many children, some who were young fanatics of football. It was there her interest was formed. What was it, and how could she play it? Her Christmas gifts that year consisted of balls, jerseys, and other memorabilia of who she had grown to call her favorite team: Liverpool FC. While Oberon often recounted stories of quidditch whenever he was home, Mackenzie found she was much less interested in that than she was in football. She practiced and pushed herself, and was relentless. She went as far as joining a club, to whom she dedicated her time until she received her Hogwarts acceptance letter.

Mackenzie was surprised to find the letter perched on her windowsill, shortly after she'd turned eleven. While she knew of Oberon and his gifts, she didn't think she shared them; after all, she'd never had a manifestation of magic, from what she could remember. Except she did. She was four, too young to remember the event, but as her parents look back on her childhood, there couldn't be any other explanation that didn't involve their daughter being a witch. It was a snowy day, yet when an angry Mackenzie stormed out, furious she couldn't play football due to the inclement weather, the skies slowly began to clear up, paving the way for a sunny yet very wet day as the snow melted away. Nevertheless, it got her into Hogwarts, where she was all mopey for the first year. She was a _____, unsurprisingly, and made a name for herself by being accepted into the quidditch team as a beater. She thrived there, but many suspect she'd have made a legendary chaser. After all, she played its equivalent in Hogwarts' football club and dominated the position. By her third year, Mac had amassed a respectable reputation amongst her yearmates and housemates. By her fourth year, she was the co-captain of the house's quidditch team, alongside seeker Teagan Sinclair. She and Teagan were close - closer than friends typically were - and many suspected they had an ongoing relationship. They didn't actually confirm it until after they'd won their final game that year and had secured the Quidditch Cup, when they were caught making out mid-party.

In her fifth year, Mackenzie was approached to sign with the Junior National Quidditch Team. It took extensive persuading and reassuring her family, but she got what she wanted. She already belonged to a club, and this sealed the deal for her. It guaranteed she had a good, good future in quidditch. In her sixth year, she was bumped to the reserve team for the National Quidditch Team. It was during this year she reintegrated herself to muggle society with special permission from then Headmistress Elmira to play football practice and games on weekends. In her seventh year, she made the starting roster for the ENQT. She very nearly dropped out of Hogwarts to do quidditch full-time, but she ultimately decided against it. She didn't want to disappoint her parents. Her seventh year was long, difficult, and hectic, but Mac made it work, and she was able to reap the benefits by receiving good marks on her NEWTs (sans Herbology, where she scored abysmally) and playing the World Cup the summer afterwards. The English team ended up winning the World Cup that year. The years that followed were a whirlwind. She got engaged to Teagan at 20, married her that same Christmas, had firstborn Jessie Alina at 21, and twins Ryder Harlow and Caden Lucas at 25. Many felt they'd moved too quickly, hadn't experienced everything life had to give, but for anyone who had experienced it, they could see this was what they wanted; they belonged together. They had that fairytale romance. They lived ups and downs, and were 100% sure what they had was true love. And they were right. It's such a shame tragedy struck when it did.

It was Teagan's first game since the birth of the twins. They were playing the Tutshill Tornadoes. A bludger had gone rogue, and - God, if Mackenzie had just gotten there on time, then she wouldn't have had to watch her wife's head cave from the pressure of the iron ball and her corpse fall 200 feet until it hit the floor. It was a gruesome sight, and Mac still has nightmares from the accident. It was difficult, accepting her death and everything that had happened. To be entirely honest, she still hasn't accepted it. It made her wary, fearful of what would happen to her children if she kept playing professional, and so she was quick to announce her retirement. As far as the wizarding world was concerned, Mackenzie had left them, unable to cope with the circumstance. She took Jessie, Caden and Ryder, and moved to Birmingham. Teagan's life insurance was hefty, and with Mackenzie's own wealth, they were set. And yet... it felt wrong, not doing anything with her time. It gave her too much time to dwell on the past, to give into her misery. And that wasn't good. So she put Jessie in a pre-school and the twins in a nursery, and fully devoted herself to her football career, which had run parallel to her quidditch career until she retired from the latter. It was horrible at first - she barely slept, she couldn't find her appetite, etc. But it helped, a lot. She began improving, the nightmares turned into a weekly thing versus nightly, and she didn't feel like she wanted to die anymore.

Then came the Ministry knocking on her door, a year later. It had taken them some time to track her down, but it was part of Alistair Fitzgerald's policies. They needed her back in the wizarding world, lest she wanted her wand snapped. And even though she was tempted to just pass them her wand, she remembered Oberon. The Sinclairs. Her & Teagan's time at Hogwarts. How her children would likely inherit her magic. And then her decision came easy: to move back to magical Scotland. She was reluctant to do so, and it meant she had to put a pause on her football career for some time, but she had to deal with her past one way or the other. Maybe this was for the best.

Given [ Mackenzie ]In Gaelic, it means "comely." It can also mean "child of the wise leader" and "born of fire."
Middle [ Valentina ]In Latin, it means "strong."
Surname [ Sinclair ]Name of a powerful Scottish clan, originally a habitational name from Saint-Clair-sur-Elle in La Manche or Saint-Clair-l'Évêque in Calvados.

Retrieved from "https://dumbledoresarmyroleplay.fandom.com/wiki/Mackenzie_Sinclair?oldid=1054021"
Community content is available under CC-BY-SA unless otherwise noted.