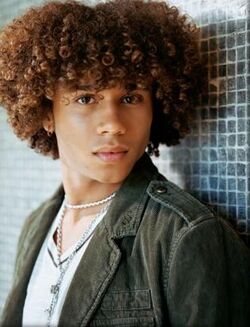 On December 22nd, Maximus and Olivia Carrows had their second child, out of three, and his name was Marcus Carrows. Marcus's parents were kind and caring people, who took wonderful care of their two sons and one daughter. Marcus was a curious baby, and energetic, especially when he was young. He was always trying to take in everything that was going on around him...trying to analyze it and understand it all. He had a giant family, and they were all quite nice people. They got together on certain holidays to have giant family reunions. His family was made up of mainly Pure-Bloods, and were all quite skilled witches and wizards, but none of them considered themselves better than other families.

His older sister, Sophia, was always like his second mom to him. Afterall, she was eight years older than him. Sophia was always kind to him and playful. They spent much time together, and Sophia babysat him and Dominic (Marcus's younger brother) when his parents were out working. Sophia left to go to Hogwarts when Marcus was three, but wrote to the family at least once a month to bring new updates of her stay. And of course she always came back for Winter Holidays.

His younger brother, Dominic, was the main person he hung out with when he was little. Dominic was only a year younger than Marcus, and Dominic was very energetic and a rough-housing sports-obsessed person, unlike Sophia. They ran around and played all the time. Dominic was definitely Marcus's best friend. Marcus spent so much time with his family that he didn't really meet too many new people, but he was never afraid to walk up and say 'hello' to someone.

But, of course, as it seems to always be, no stories have a perfectly happy ending. Marcus was five, and it was the day before Marcus's favorite holiday. It was Christmas Eve, and they were having a big family reunion. Everyone was there. Even Sophia and the rest of his cousins attending Hogwarts. Yes, the whole family had never been this close before. There must have been at least fifty people there. They had a rather wooden house, and since Marcus's father studied Muggles, they had a gas stove. They were testing it out for innovation purposes, but while everyone was out of the kicthen, someone must have lit the wall on fire. The whole house burned down, and the running gas stove only fed into the raging flames. It caught everyone by surprise. They were just standing outside, eating and drinking and talking, not ready for it. Who lit the house on fire remains a mystery to this day, but now Marcus is very determined to find out who presumably intentionally caused the fire.

Marcus and Sophia were the only ones who survived, and that was only because they had been walking away because Marcus felt sick after eating lots of junk food. They were adopted by Harris Malwright, a kind single man who never had the chance to have children himself. It took years to adjust, but they were finally making it fit. Harris gave them their space when they needed it, and was a caring person when they were ready for it.

Marcus was ten, and there was still no sign yet that he had any magic. Sophia was starting to worry, but a few days after Marcus turned ten, they were sitting at the breakfast table eating breakfast, when Marcus sneezed and a broom flew up from teh corner of the room and whacked Harris in the face. It was quite the funny scene, really. The next year he got his acceptance letter to Hogwarts and was off to go to the historic school. Sophia recently graduated from Hogwarts, and next year he will be entering his fourth year there. He can't wait to return to his real home now--Hogwarts.

Marcus is sweet, kind, and caring. He's an honest boy who always wants to do the right thing, and doesn't want to get in trouble. He likes to meet new people and tries to make friends with everyone. Marcus is never intentionally mean to anyone, and doesn't give people reasons to hate him. Above this, he's a bit of a doormat, or a pushover, you could say. He's not too competetive, and if someone wants something from him, he'll probably give it to them. But he is great at keeping secrets, because he respects people's privacy. Marcus loves to make people laugh. It gives him the best feeling in the world. Marcus also enjoys acting and doing drama, and doesn't get nervous when doing speeches in front of people.

His FC is Corbin Bleu.

Retrieved from "https://dumbledoresarmyroleplay.fandom.com/wiki/Marcus_Carrow?oldid=1074738"
Community content is available under CC-BY-SA unless otherwise noted.