[IN THE PROCESS OF BEING REWRITTEN]

Megan is an introvert. She'd much rather prefer to stay in the comfort of her own room rather to go out and socialize with the other children in the neighborhood. When it snows, she'd be found snuggle up in her blankets alone with a book in one hand and hot cocoa in the other. When it's sunny and warm? She may take her book out to the front porch and put in a pair of headphones to block out any loud sounds. Although she's not a big fan of socializing, Megan isn't shy. When meeting someone new, she isn't timid or awkward. She just doesn't like to go out of her way to actually meet someone new. Often, she doesn't have too many close friends because she hasn't tried hard enough to be close with the people she knows. Though, in the very rare cases where Megan does try, it's the stubbornness in her that may lead to fights and losing friends. She won't admit it, but Megan is a hot head. She likes things done her way, the best way. She's not a fan of change, and often struggles with trying new things. She likes what she has, why add a whole entire new change and ruin it?

Over time, Megan has tried a few hobbies that she has liked - including the guitar that she's determined to learn... some day - but there are two that stand out the most. Books and Fashion. Ever since she could learn to read, Megan has loved books. Even before that, when her mom occasionally read to her or when she would look at the pictures on pictures books. Fantasy, tragedy, poetry. Megan loved them all. Even comic books. In fact, Megan's a huge comic nerd. Super heroes are interesting. Then there's fashion. It started out when she was five. She didn't know where the idea came from, but she started drawing outfits with her crayons. Eventually, she had a whole journal full of different styles and clothing items. Later on, she'd pick up sewing and do that once in a while, and still will be found sketching different outfits of sorts.

[IN THE PROCESS OF EXTENDING]

Prior to WizCo, to LBC, to Minerva's Publishing House, there was the Conwyn family. Until the recent technological boom, everything technology came into fruition thanks to the Conwyn's. They've always been heavily linked to important developments in the wizarding world - the first functioning stereo, the first drafts for a flying car independent of charms, even inklings of something akin to wizarding internet, it all came from the Conwyn family. The family's name was praised and they were all but worshipped for their contributions, almost putting society on par with their muggle counterpart. Until, somewhere during the first wizarding war, they vanished. Every trace of the family had disappeared. Their mansion was razed to the ground, but no bodies were found. Their contributions were all found burnt beyond recognition, and the family library that recorded all their progress was decimated. Nobody knew what happened to the Conwyn family.

To this day, what happened to the family continues to be a secret. Very few people know, if only to ensure it doesn't happen again, thus limiting the potential of people realizing what lies just under the surface. Credited to Cornelius Conwyn, he went to great lengths to preserve his family's name and restore its previous glory. All advancements had been lost, but he sought to thrust the wizarding world into an era of progression - maybe even to the point where wizards could coexist with muggles in peace. In an effort to make his dreams come true, he sought out the perfect union; someone who shared his ambitions and rivaled his intellectual capacity. It was then he found Evelynne Riverty, a recently graduated Ravenclaw known for her ability to get things done and innate desire to achieve greatness. They dated for several years prioritizing their respective careers over their personal lives.

At the age of 27, Evelynne and Cornelius married, bringing a new definition to the Conwyn family. Cornelius, who by then had become a self-made CEO of a construction company. Conwyn Building Corp. became known around the wizarding world for its modern sense of construction. With moving buildings, infused with magic, they quickly rose through the top, encouraging Cornelius to invest in another company - one he swiftly became CEO of as well. While he didn't make as big an impact as he desired, Conwyn Building Corp put his name on the map. With these newfound opportunities, he and Evelynne moved to the United States. There, Evelynne founded Nox Broadcasting Company, or as it was more commonly referred to; NBC. It was a means to reach out to the public, which is what she ultimately wanted. Furthermore, as invested as they were, they also wanted to ensure they had children that could carry on the family name and power. That was when they conceived their three children: Cohen, Eselde and Spencer.

As a means of solidifying their stance on the wizarding world, they - and their children - carried the hyphenated version of their names: Conwyn-Riverty. Henceforth, all their efforts would be poured into creating a technological empire. While there were massive companies surging left and right, Cornelius' heritage served as an advantage, making them seem all the more appealing to potential investors. All companies under both Cornelius and Evelynne likewise became a portion of Conwyn-Riverty Enterprises. Evelynne & Cornelius served as co-CEOs and chairmen for both NBC and CBC, thus increasing their workload until they eventually stepped away to focus on expanding their reach to the wizarding world. Eventually, they decided, either Cohen and/or Eselde would take over. True to their word, years later, Cohen returned to America to oversee all operations there. In a matter of Cornelius & Evelynne's following steps, it involved one place and one place only: the United Kingdom.

For a brief amount of time, the duo contemplated purchasing the rights to the Daily Prophet, but eventually decided it didnt benefit either side. Not to mention, it limited the extent of their powers. Because of this, they focused on TV. Though the scope of their knowledge was extensive, in order to successfully create Silencio Records, they called in the help from Evelynne's brother, who was well-versed in record labels and led his own in the muggle world. Meanwhile, NBC gained an English counterpart: Lumos Broadcasting Company, or as it later became known, LBC. Though for a brief period of time, LBC was under the control of the Fitzgerald family due to technicalities, they swiftly gained control when Alistair was elected Minister for Magic. To this day, LBC & Silencio Records continue to be Evelynne & the Riverty's stronghold, whilst Cornelius has found his strengths lie on his construction empire, having worked closely with the Bostwick family to create every building currently located in Lincliff City.

Megan's mother was the youngest. Spencer Conwyn-Riverty. The youngest and the princess of the family. Adored, spoilt, Spencer was loved from the moment she took her first breath. However, she wasn't arrogant and was polite to the world around her. Though it was obvious Spencer wasn't going to be as involved in the family business like her older siblings would be, it was obvious that whatever she was going to do–she was going to do it well. Spencer didn't like America, she didn't like the people, didn't like the atmosphere. So when she was seventeen, she travelled as much as she could for the next year. It was here that she ran into Dmitri Ivanov. Spencer met him during a trip to Poland and they had a four month fling with Dmitri jumping on her holiday plans. He was another wizard and they quickly fell into love. Well, infatuation. Only one month after parting ways, Spencer found herself pregnant.

Contacting Dmitri, he instantly made his way to New York to meet Spencer. The two were somewhat happy for the next few years, introducing Hope and Megan Conwyn-Riverty to the world, just after Easter. When the girls' were two years old, Spencer and Dmitri married. It was a small, quiet ceremony but both were happy with it regardless. Spencer didn't want anything extravagant. However, everything shifted when the girls' were three years old. Dmitri was killed in a brutal car accident. It took the small family by complete surprise and whilst the twins were too young too truly understand, they knew that they wouldn't see their father again. Spencer threw herself into her work. Building up her repertoire as a director. But this wasn't enough. People kept on approaching Spencer about Dmitri and so Spencer made the executive decision to move to England. A fresh start. The twins were five years old by then and accepted the move quite easily.

Hope had always been the more known twin. The famous child actress. The more social one. The one who made friends easier around the neighborhood. Megan preferred the comfort of her room and being alone. Reading a good book or drawing different clothing ideas that she loved to do. She liked being out of the spotlight, and letting her twin be in it. This didn't mean Megan didn't make friends when her family moved to Coral Gates or when she went to school. She did, and likes them lots... she just didn't hang out with them as much. No problem with that, she didn't think.

Megan's first sign of magic was when she was seven, a little less than a year before Hope. She was playing dress up with a few of her mom's clothes, doing so when her mother wasn't around to catch her. Clearly, the clothing items were way too big to fit Megan. Well, at first they were, until she tried on one of her most favorite dress of her mom's and it would shrink down to fit Megan's size. The twin's mother would be very confused when seeing her favorite dress on her daughter later, fitting right to size. At least Megan got to keep it. And, eventually, this led to the confirmation a few years later that she and her sister had been accepted and invited to Hogwarts where they would attend for their years of magic.

Significant Other(s)None Best FriendsShe wants to say her sister, but she also wants to know her sister's answer. FriendsCesario Cambeiro, Frankie Wei NeutralN / A EnemiesShe's not an enemy sort of gal. OtherShe gets a new crush every week, so possibly. 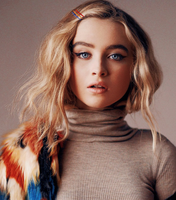 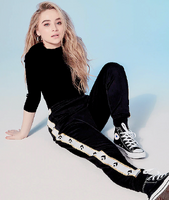 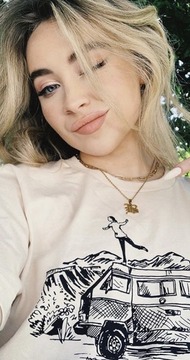 Retrieved from "https://dumbledoresarmyroleplay.fandom.com/wiki/Megan_Conwyn-Riverty?oldid=1108937"
Community content is available under CC-BY-SA unless otherwise noted.