Keilani Mahelona was born and raised in Honolulu, the daughter of a Native Hawaiian witch, and a Muggle American military man. Keilani's mother, not wanting to send her daughter to such a faraway school, homeschooled her daughter on the islands, and as such... Keilani never left. Keilani's father knew about his wife and daughter... but his job with the military took precedence, and as such he and Keilani were never close. He was a rather distant father figure. When Keilani was twenty-one, she met a handsome surfer, Taylor Dawes. Taylor was spending his spring break from college surfing in Hawaii, and hadn't planned on any sort of fling, but that is the relationship that occurred between the pair. The fling left Keilani pregnant and alone. Taylor wasn't interested in being a father, and left. Nine months later, in January, Keilani gave birth to a a daughter, Noelani.

Keilani raised Noelani as a single mother for the first year of her life, before she met a young, British anthropologist on the island. Oliver Hayes, also a wizard, was interested in studying Hawaiian cultures, and how they related to volcanoes as a people. Their meeting was rather happenstance, but Keilani could tell there was something different about Oliver. Both of them played off as being Muggles for the first several weeks they knew about each other, but eventually came to realize that they were both people with magical heritage through flirty suggestions that turned into more concrete awareness. Their romance was something of a whirlwind after that. Keilani and Oliver were married within a year, and Keilani was pregnant and gave birth to her son Koi when Noelani was three.

Noelani and Koi were raised on Honolulu for many years, much to the disdain of Oliver's parents. They'd never dreamed their son would take up residence in the place he was studying, at least not in a permanent fashion. Marrying a local was beyond their wildest imaginings. To say that Mr. and Mrs. Hayes disapproved of Oliver and Keilani's marriage is an understatement at best.

When Noelani first showed her signs of magic, at age six, when she touched a small flower that hadn't yet bloomed, and it became a fully bloomed flower in front of her eyes. At that point, Keilani and Oliver had a discussion. Oliver had been educated at Hogwarts; Keilani had been educated at home. A move to England from Hawaii would be a significant one-- over 7000 miles. After nearly three years of compromise and discussion, the family moved to England, two years before Noelani was set to begin her schooling. Upon arrival in England, it became pretty clear that Mr. and Mrs. Hayes had no interest in getting to know their daughter-in-law, or their granddaughter. Koi, on the other hand, was showered with love, gifts and attention. Whether it was because he was their full blood, or because he was more white-passing wasn't initially clear, but it obviously bothered Oliver and Keilani.

The first three years of Noelani's schooling passed without much incident. She was sorted into Gryffindor. She's excited to have her brother begin with her this year.

Noelani is a free-spirited young lady on the outside. She dresses how she likes, and acts how she likes and is outgoing and bubbly enough that she makes friends easily. She's a very emotional person, and can always tell how people around her are feeling, but it also makes her a bit self-conscious. She developed early for her age, and has Polynesian curves that sometimes get her stared at-- and she feels those stares. She wants to believe that she's brave enough to ignore them, and not let them get to her... but they do. She has comebacks to people who stare... in her head. But she's not exactly brave enough to tell them to stop. Despite this, she's knows that her self-worth comes from within, and she's not going to diminish her personality to make others feel comfortable. She'll just probably cry about it later.

Growing up on the islands of Hawaii gave this girl a love for the water. She loves swimming, and boating and being in the water whenever she can. The fact that there's not much around in England (and especially at Hogwarts... save the lake) bums her out quite a bit. She definitely prefers beach day to school days, and if her mind is wandering in class (which happens more often than she'd like) it's because she's daydreaming about the warm sun, sand, and waters of her homeland. She's definitely not super academically inclined, which is frustrating for her. She feels like she doesn't have a lot to offer, and she's not certain of her place in the world, especially when there isn't a subject that's jumping out as her favorite. She wants to be something, like her parents were, but she feels lost and doesn't know how to find her way. 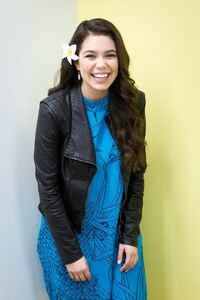 Noelani has thick dark hair, big expressive brown eyes and usually wears a big smile on her face. She's already growing into her Polynesian curves, and that embarrasses her somewhat-- so she wears slightly baggy clothing to try and hide it, so that she's not teased about it quite so much. She's a little on the shorter side. Her face claim is Auli'i Cravalho.

*Her MBTI is
Retrieved from "https://dumbledoresarmyroleplay.fandom.com/wiki/Noelani_Hayes?oldid=1062361"
Community content is available under CC-BY-SA unless otherwise noted.