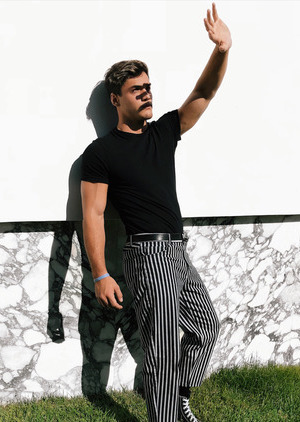 Percy is a lot more down to earth and, well, normal than other kids who're in his position. To be fair on him, until about three years ago he never knew how powerful his family was considered and still has moments where he's just shocked over it. He prides himself on being an easy person to talk to and likes to be as reliable as a friend as he can. No matter how old or new of a friend you are to him, he'll still give you the same time of day if you need it. His drier humour can be a bit abrasive sometimes but he means well - if his constant apologising if he thinks he's upset you is any indication of that. Known to be part of a 'triple trouble,' (or at the very least 'double trouble' with Elias) it's not surprising for Percy to be somewhat cheeky with his words. Moreover, most people can characterise Percy as being a pleasant individual to be around. His concentration in classes and subsequent constant stream of grades are things that aren't as desired, but he's trying his best.

Like everyone, Percy has his flaws and his are rooted in his negative emotions. Whether its anger, sadness, anxiety or anything negative whatsoever, he tends to deal with it in similar ways. The answer, quite simply, is that anything negative is blocked out and repressed. Sometimes it sees itself turned into motivation to do better at magic but, for the most part, he chooses to actively ignore it. That isn't to say he's not in touch with his emotions because, largely, he is, but he'd rather correlate all his thoughts rather than letting his emotions lead the way. The only subtle differences are that when he's angry he tends to be more sarcastic in his speech, when he's sad there's less talk from him and he'll let either Cosima or Elias speak more, and when he's anxious he'll ramble. His actual feelings, however, won't be found out until days, perhaps weeks afterwards. Someone could upset him, experience the more recluse Percy, but only find out about why he was upset days later. Percy'd never take his negative emotions out on the person who made him feel like that (except anger, he might then) as he feels, for the most part, people can be careless with their words and they don't deserve being yelled at or mistreated by him. His temper largely resembles that of a bomb, ticking away until he explodes. It takes a lot of time to pass before he can explode and he's only done it a couple of times. It's a common joke, much to his expense, between the triplets as to when the 'Percy Bomb' is going to go off and, if it does, if can they watch with popcorn.

It was always inevitable, really, that the Di Sena and Bonaparte families would arrange a marriage between two of their members. Both were of high acclaim in Europe, the Di Sena's being an influential family in Italy and the Bonaparte's comfortably having high status in both France and Italy. It really was a matter of when and who in regards to the marriage, many assuming it would be arranged. The story of Lazzaro-Jacquemin Bonaparte, the French born youngest child of one of the main branches of the Bonaparte family and Isabetta Di Sena, the most aspiring daughter of renowned architect Antonio Di Sena, was one of equal passion and influential gain.

Initially it was never the two of them arranged to get married. Instead, Lazzaro-Jacquemin's brother, Philippe, and Isabetta's sister, Rosa, were subtly forced in the same area in hopes that the two would get friendly enough that the martiarchs and patriarchs of both families could reasonably strike up the deal. Philippe and Rosa never took a liking to one another, only very demure greetings and boring small talk were exchanged between the two of them which led, ultimately, to two disappointed families. Playing matchmaker hadn't gone all to pot, however, as some in the families noticed that Lazzaro-Jacquemin and Isabetta were striking up much more personal and intrusive conversations with one another, a spark of chemistry dangerously close to igniting. Really, as soon as Isabetta spilt to Rosa that she found the youngest Bonaparte attractive, it sealed the deal for both families and the two were pushed for an arranged marriage.

Lazzaro-Jacquemin and Isabetta humoured their families with their marriage. They got married just months after meeting each other but treated one another as a partner rather than a spouse. To them they were still dating and, after what looked like three years of marriage to everyone else, had a smaller, more intimate ceremony to solidify the marriage for themselves. The two promptly moved to Great Britain afterwards, settling in a small village in the English countryside, in an attempt to create an informal barrier between them and their families. They were, after all, set with the task of creating a third family to form a trinity of power and, though in love with one another, both Lazzaro-Jacquemin and Isabetta took the task seriously. With much debate on which area of business they wanted to settle their roots in, the two decided that publishing could be largely beneficial for power; it'd give them a slight degree of influence over what was published in the UK and it set them apart from their political and architectural origins. Subsequently, Minerva Publishing House was created with the promise to 'Enrich the Minds of the Nation.'

Initially, Minerva Publishing House concerned themselves with the publication of recipe books, both for baking and potions. Aiming to please the ordinary witch or wizard, the couple wanted to have the support of the regular people before deciding to set their aspirations higher. Although it took both books a bit longer than the couple would've wanted to get off the ground, soon they become favourite bestsellers, allowing Lazzaro-Jacquemin and Isabetta to begin looking higher up the publication food chain. With the newfound popularity, the two set their sights on one of the larger newspapers that circulated throughout the nation.

However, before they could make some serious ground, the couple decided that settling down and starting a family would be beneficial. After all, if they were to make the Di Sena e Bonaparte's a rival family to their own ones, then children would be needed. Both Lazzaro-Jacquemin and Isabetta were fine with a smaller amount of children. With each of them having large numbers of siblings, both enjoyed the prospect of their kids being a more tight knit family. The couple had two daughters, Zuana and Lavinia, in quick succession and were content with their family. With having only two children, they decided preemptively that one could manage the books publication when they retired and the other could have the hopeful newspaper publishings.

The next two years were a wild time for the Di Sena e Bonaparte's for a variety of reasons. Perhaps the biggest and most celebrated thing was Minerva Publishing House gaining the publication and editing rights to The Daily Prophet. Having such a control over the magical British public was one that the family dreamed of having but knew it'd take them a long time to get there so, achieving it in such a small amount of time in comparison to the estimate, was a massive and celebrated deal. In the heat of celebrations, Isabetta fell pregnant after one particularly joyous night. Though two children had been enough for them, Lazzaro-Jacquemin and Isabetta welcomed the pregnancy.

Their joy, however, grew as they found out that one child became twins, and twins became triplets. Twins and Triplets were rarities in their families so for them to achieve such a thing alongside publishing rights was massive. To make the birth of their children even more special, they made sure that Isabetta was in Paris at the time to ensure French citizenship via double jus soli. After an excruciating nineteen hours of labour, Isabetta gave birth to their triplets; Cosima, Elias and Percival. After the birth of their triplets, both Lazzaro-Jacquemin and Isabetta decided that the notion of having a small family was abandoned and, instead,promised that each of their kids would be loved and involved - something they were sure neither could say definitely about them and their siblings.

As expected from having parents growing on the socioeconomic scale, the triplets had a good childhood. They saw the birth of three younger siblings - Gawain, Rowland and Cecilia - and were able to experience the muggle school life. There'd been much deliberation between their parents as to whether or not any of their kids would attend a muggle primary school but, as Isabetta pointed out, it was somewhere for their kids to go during the day and, really, made them much more enriched than any other pure-blooded kid. As expected, the triplets were attached by the hip and it became a running joke that if you saw one that the other two wouldn't be too far behind - something that was largely true. At the very least it was normal to see Percival and Elias together as they were notorious for tricking everyone into who was who - Cosima having to be the one to tell everyone which was which.

The theme of doing things as a trio was a constant motif during the triplets' childhood and their first magical experience(s) were no different. When the triplets were seven, the family were enjoying one of their annual walks in the many forests surrounding their homes when the triplets got into a play fight with one another. All was well and normal until trees surrounding the family began to splinter on their own, Cosima began to levitate slightly and abnormal gusts of wind swamped the area. At first scared for their lives, it wasn't until Lazzaro-Jacquemin and Isabetta distracted the triplets did all phenomenons stop, leading to the confirmation that, yes, the triplets were magical like their older siblings. Subsequent plans to prepare them for magical life were put into place. Though they couldn't practice magic, the three were introduced to the concept of it and began to read their parents' potioneer's manual to get a feel for the subject. All three showed an interest so, naturally, each were excited with their letters came at the age of eleven.

Now sixteen, Hogwarts is a home away from home for the triplets. Little things like confusing people between Percy and Eli's identity still goes on, each triplet has a small soft spot for Potions thanks to their parents' books and, largely, the realisation of how important their parents are have all been things that they've gone through. Finding out that their elder sisters renounced their rights to inheriting the family company was also a little blow to their systems, seeing as the three of them had to prepare in place of them. Perhaps split up by their houses, it's still not unusual to find the triplets together whenever possible.

WIP
Add a photo to this gallery
Retrieved from "https://dumbledoresarmyroleplay.fandom.com/wiki/Percival_Di_Sena_e_Bonaparte?oldid=1038633"
Community content is available under CC-BY-SA unless otherwise noted.