Start a Wiki
This character has been requested to be preserved by Bond_em7.

Phoebe is a social butterfly with a soft heart. She loves to go out and have fun, but she's the friend anyone would be willing to come to with their problems. She would much rather be the one cooking then the one sitting in the restaurant waiting for the food, and she keeps her home tidy and in order. A dream of hers is simply to fall in love.

Phoebe's sense of style is classy yet subtle. She often mixes modern and vintage clothing, with a very feminine touch. Her long red hair and her gorgeous blue eyes are easily her most beautiful features, and she doesn't need her clothing to highlight them- unless, of course, she's trying to impress. 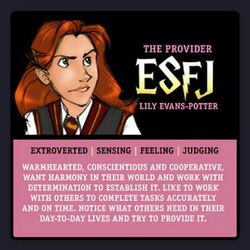 Phoebe is overall very kind and caring. She is unwilling to break her high moral standards, but will always find sympathy, if not empathy or compassion, for anyone, from the hero to the murderer. She is a loyal and forgiving woman who makes friends easily, because others easily recognize the light within her. Phoebe is a very friendly person, and makes a lot of friends.

Orphaned as an infant, she grew up in an orphanage, and learned early on how to fend for herself. She has never known her family, but she has memories of love and support throughout her life.

She had a full-time job at the Luchino Café, but now it has gone out of business. She is currently applying for a job at the Leaky Cauldron. She hasn't had much luck with guys, but mostly because she wouldn't go as far as they wanted. No matter- perhaps a new job and change of scene will help!

Phoebe has recently come out of a coma, after having some major headaches and nightmares, then hitting her head. She's recovered however, and it doing much better.

My user is User:Bond em7.

Retrieved from "https://dumbledoresarmyroleplay.fandom.com/wiki/Phoebe_White?oldid=964055"
Community content is available under CC-BY-SA unless otherwise noted.