Pixie Jewel Baker is an African-American witch from Essex County, Massachusetts. She's one of three magical children in her family, the first to only have attended Hogwarts as a Gryffindor.

Pixie was born in Rockport during the spring of 2026 to Camden Hill and Perry Baker. Her mother Camden worked closely with her father Perry in the field of healthcare and law enforcement in their native state of Massachusetts. She was a night ER nurse and part of the dispatch team for the paramedics. He was a member of the Rockport Police Department and a volunteer firefighter they met formally once they were both gainfully employed, during their time at their primary jobs. They were acquaintances of mutual friends when they went to Ilvermorny, but they didn't have any conversations with one another until they became friends through work. Pixie was the last of three uniquely named children the couple share. Her parents had her name picked out first, before they had even conceived. They didn't feel that such a name fit their eldest two children once they were born, once they'd gotten the chance to meet them. She fit her name perfectly, she was a rambunctious little troublemaker right from the start.

Being that her parents worked hard and often, she and her siblings were cared for during work hours by their grandparents. Her mother and father had a near perfect schedule designed that allowed them both to have at least one day off with the kids and a second day off with one another. When they were all able to take advantage of it, those were Pixie's favorite days of the week. When things got a little hectic, when the work week for her mother and father was rough or she wasn't able to get along with her siblings it was hard to find a highlight of the week. One of the special treats she always liked the most, courtesy of Grandma and Grampa, were the short trips down south to the movie monster museum and the bad art gallery. She didn't mind it when they went to Singing Beach, or Bish Bash Falls, even the grape hyacinths at Bulb River still impress her. There's nothing like the first scare at Count Orlok's or the stupid jokes and puns at the Museum of Bad Art.

Prior to a shooting at the hospital that cost both Camden and Perry their lives, the Baker family talked of leaving the country all together. To gauge the reaction of the children they proposed the idea of moving to England or the Netherlands. It was more of a fantasy than anything else, a story about a place they had never been before yet everyone had their own version of. After the cremation of their parents bodies Indigo, Lyric and Pixie had their lives packed away into boxes. Due to the wishes of both her parents the small family was uprooted and relocated to the UK to live on the plot of land their father choose in Hertfordshire. Pixie was unhappy about the move, she was more unhappy not to have that little bit of time with her parents each day and night. She was too young to know how to express her feelings at the time. Doing whatever it took to ease her own emotional pain she created her first imaginary friend. Shortly thereafter she discovered her magic, she was six. She levitated a small container of juice.

Her curiosity is what rips her out of bed every morning. It puts the pep in her step. She doesn't let what would or should frighten her keep her from learning about something that interests her despite the ever present danger in the unknown.

She's an explorer and an adventurer at heart. She loves to wander and she often lets the wind guide her when she does it. She's able to find contentment in any sort of area regardless of how much space to move there might actually be.

Pixie is average height and weight. She looks very much like her two older siblings who also resemble both of their parents. Pixie got her mother's thick, dark, curly hair. She wears it up because she knows from experience she's going to get things caught in it, even by accident. She's got a dark complexion compliments of her father, as well as her rounded brown eyes. She doesn't often like to dress up preferring to wear jeans and a t-shirt, but on the occasion when she's got to wear something nice she tries to keep it that way, nice. 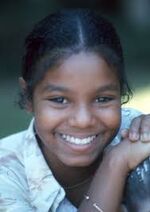 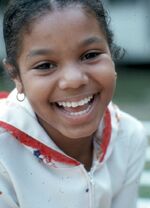 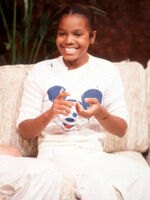 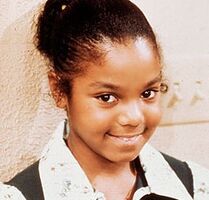 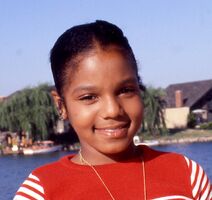 Pixie is very animated and easily excitable, she talks with her hands and occasionally loses control of the volume of her voice. She's jam packed with energy just waiting to burst out of her. She spends a great deal of time running at top speed, it gets her places faster. When she's not moving faster than a speeding bullet (figuratively speaking) she's having a whole lot of trouble sitting still. She's always got a foot or finger tapping or twitching, as some might call. Her eyes are wander more than her mind does, she's almost always drawn to something shiny, something moving, or something making noise.

She's quite the unshakeable daredevil and can't seem to resist a challenge no matter how stupid or how dangerous. She's always willing to go charging towards something frightening because she thinks it's fun to be scared. The little voice in her head (what should be her conscience) typically tells her to do these stupid and dangerous challenge because she'll only regret it she doesn't. She doesn't assume this is something bad as it's merely signals from her brain giving her all the right cues that she's looking for.

Camden Hill was a Half-Blood African-American witch born in 2003. She knew nothing about magic until the day that she discovered she had it. It wasn't easy for her in her tiny No-Maj neighborhood. Her mother Lillian and her father Landen were both No-Maj born and both found it a difficult study to keep separate their magic from the "normal" life they knew best. Camden grew up knowing about and spending much more of her time as part of the No-Maj world. She had her aspirations firmly set when her powers began to surface. Fear of what she could do was easy to succumb to and hard to deny. Yet, Camden made her way through Pukwudgie despite always thinking herself more of a Wampus girl. She ended up cementing the version of herself she didn't believe existed sometime after graduation from Ilvermorny when she began her life's work at the local hospital where she met her future husband and the father of her children.

Perry Baker was a Half-Blood Jamaican American wizard born in 2002. He was a lucky child who was able to split his youth between magical and No-Maj society. He grew up in a city where magic didn't have to be hidden. His father Maven was Pure-Blood and his mother Henna was a Half-Blood, they'd both graduated from Ilvermorny much like their son would. They taught him the difference between the wizarding world and the No-Maj world early and often. He wasn't allowed to have fits or tantrums as either of his parents were quick to fix his magical mistakes, when he would misbehave he was appropriately punished. Perry was put into Wampus and never looked back, he always was the type to keep looking forward no matter what sort of obstacle he encountered. That became somewhat difficult when the unstoppable force (Perry) met the immovable object (Camden), the one woman he couldn't manage to continue living his life without.

Retrieved from "https://dumbledoresarmyroleplay.fandom.com/wiki/Pixie_Baker?oldid=990436"
Community content is available under CC-BY-SA unless otherwise noted.