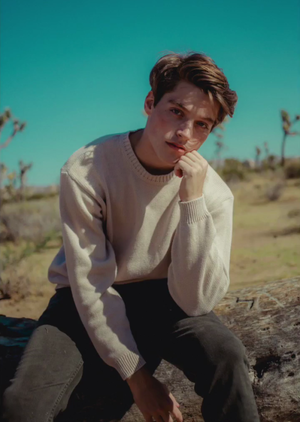 Toby is a rather relaxed individual for the most part; he takes whatever comes his way in his stride and always tries to make the best out of whatever situation he's in. Whilst that doesn't mean to say that he's a pushover, if Toby can find himself agreeing with a request, idea or whatnot then he'll definitely be an advocate for it and follow through. Mostly people characterise him as upbeat, optimistic and joyful - something needed to be working at an ice cream parlour that serves the younger population on the daily. He enjoys cracking a joke and loves to lace his words with sarcasm where he can - all whilst remaining polite, of course.

There's not really any negative parts to Toby's personality; everything that can be categorised as such are typical amongst everyone. There's times where he can be stubborn and other times where he can be reclusive and refuse to speak to people. Generally, when annoyed, Toby bottles up his emotions and then has a habit of taking them out on the most recent person to push him over the edge. Whilst before it'd be at the mercy of anyone, both anger and sadness, recently Toby had made steps in unleashing said anger in a different way, one that doesn't push people away from him and, in turn, isolates him.

Toby, thanks to his family's knowledge, is rather business savvy - something he excelled more in during his education. He has a preference for healing spells and defensive spells over controlling and offensive ones, citing the former two to be more beneficial in everyday life; aka when he'd be using the spells the most. Whilst he has a degree of adventurousness to him, Toby is ultimately a creature of habit and would prefer to stay grounded where he knows he's safe rather than exposing himself to something that could destroy him.

Sofía Hernández hated every bit of who she was; she was Guatemalan, poor, and had little to no chances of ever getting herself a better life. She was just eighteen, fresh out of school, and was working a job as a waitress where her shifts were a constant nightmare. Until she met Jonathan Bostwick. He was just there for a visit, trying to close a deal for his own father's company. He was around her age, just out of Hogwarts, and was trying to fill in his father's shoes. He'd wound up at her diner, lost and hungry. Fast forward to a couple hours later, and they were conceiving one of Jonathan's many kids.

It was a scandal that many had anticipated would come to light eventually. Jonathan was a manwhore, he'd led many girls on during Hogwarts, and to be fair protection was never really on his mind. So left and right, he had women popping up claiming to have his kids. Of course, because he had the support of his father and a vast amount of money at his disposal, he was able to pay off every one of these women and silence them indefinitely. He refused to recognize his children, with very few exceptions. He first got married at age of 25, to Sofía herself, who he managed to reunite with during a follow-up on the mall he had invested in in Guatemala. Of course, she wasn't as mayo as his father wanted, hence why Sofía underwent physical changes. She legally changed her name, to something a little more fitting (i.e Linda). Their marriage was rushed, though, and it didn't last long.

Jonathan's second wife was a local pure-blooded witch who was, for the close-minded society, more socially acceptable. Sharon, was her name. Like with Linda, their marriage didn't last long, but two kids did come from the marriage. He also had children with Linda, when he married her again, and with Susan, whom he married when Linda divorced him after catching him with three different women at the same time. His marriage with Karen Westcott - his fifth one overall - also led to a couple more of his children. A pattern was presenting itself; he never really went more than five years with the same wife, until he got married for a sixth and final time, again to Linda. His life had become a joke, of sorts, and that wasn't a fact that went by unnoticed by the wizarding public of the UK.

Jonathan's father retook control of the company that he'd given to his son when he first got married. It was a rational decision that had to be made. Of course, that didn't mean Jonathan saw it that way - he fought and fought and fought, and even threatened to sue his old man for wrongful termination. He actually went ahead with it, though he and his father were able to reach to an agreement; whichever of his kids took the company the most serious, would inherit his shares and thus control. Which posed issues. From the children Jonathan had, none of them were interested in taking control. Why would they? That would mean having to oversee the development of over a hundred different businesses. That's an issue that the Bostwicks have, even today, which is a real bummer, because Arthur Bostwick is only getting older, nearing a hundred years old, and if if he dies before he announces an heir to the fortune, then... it's all gonna be for nothing.

Whilst Tobias - nicknamed Toby - was the final product of the third marriage (the second for Jonathan and Linda), he was born after the marriage itself had ended. He was the final ditch to try and salvage his parents' marriage and the ditch had failed, leaving him to be born after his parents had made the seemingly irreversible split. Toby grew up happy, though, and never knew of how he was the last attempt at saving one of his father's marriages and instead got to know his new step-mothers and converse with his half-siblings, allowing him to have a fulfilled and chatty childhood.

And that's largely what his childhood was - fulfilled, chatty and uneventful. Or it was, until he had his first magical experience. His experience was rather fun; he was eight years old and had made a bubble of water levitate from the family pool and eventually popped above his father's head, soaking him. To the entirety of the family it was hysterical but the pure action led to his life changing.

Slowly, Toby became more and more exposed to the magical side of his life until, on his eleventh birthday, he received the letter from Hogwarts asking for his attendance. After having siblings there and anticipating it, Toby jumped at the opportunity and was sorted into Hufflepuff. He was an average student, banking more on his life being great due to his family's wealth, who attained decent grades which put him in a decent spot for wherever he went. Eventually, Toby left Hogwarts as another Bostwick alumni.

Ever since graduating he's picked up his summer job at Florean Fortescue's Ice Cream Parlour and made it into a full-time job, just seeing where life takes him at the moment.

WIP
Add a photo to this gallery
Retrieved from "https://dumbledoresarmyroleplay.fandom.com/wiki/Prince_Tobias_of_Westminster?oldid=1033272"
Community content is available under CC-BY-SA unless otherwise noted.