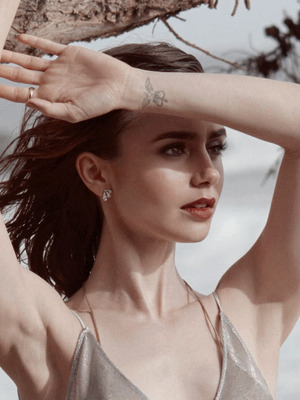 Juliet is bold. Bright. Loves to stand out in a crowd. Even if she looks small, her vibrant personality is certainly not. She doesn't care what anyone thinks and says and does things the way that she wants to. Though, her big mouth can often get her in trouble with teachers, especially during class. But, it truly is more of a good thing than bad. She isn't afraid to stand up for someone or something, and certainly doesn't shy away if someone's being a total ass. Juliet isn't afraid to tell them off. Or, although she strays from doing so, just kicking them in the ass works too if they won't listen to what she has to say. But, honestly, she mostly stands up for people than for herself. She's protective, especially toward the people she loves. She's an honest sweetheart at that, and cares for everyone who wants to care back.

The princess has always has an mischief side to her. She likes to pull a prank every once in a while, usually ending with a consequence of sorts. Though, that never seems to stop her. She's not too big on being told what to do, and often only takes rules lightly. Meaning, she doesn't think it's too big of a deal to break some of them. Juliet has been known to not think before doing, causing her to somewhat do reckless things at times. The trouble she gets in still hasn't stopped much, though. Who knows if she'll ever learn?

Being that she's the youngest of four siblings, she's always seemed to look up to them in some sort of way. Older cousins, too. Even if she's often in trouble and doing things that'll get her in trouble, Juliet knows when it's right to put on a polite smile and seem mature. She is mature in a sense. She prefers to hang out with her family on the older side compared to some of her siblings and cousins closer to her age. They're the ones Juliet looks up to most, the older cousins and siblings. Of course they would be. So, often times someone will find her with (maybe annoying) her older siblings and cousins rather than Alisa or Estelle.

Vivianne was the third born child of Queen Victoria, and the most rebellious one at that. She proved to be even at the young age of eleven, refusing to go to Hogwarts and instead attending Beauxbatons. Her rebellious side stuck with her through her years in school and after graduating as well, tending to always be found partying or some other outgoing sort of thing. She had quite the amount of scandels. When it came to people's views on her, it was either you loved Vivianne or hated her. Not much of an in between.

Henry was a news reporter who often would run into Vivianne coincidentally, having small conversations and such each time they came face to face. It had been Vivianne who finally asked him out, in which a romance would blossom from it and they would eventually marry. The reporter was, in fact, part of a pure-blood family with good lineage, so he was very much welcomed into the family. They would go on to have five kids coming in the order of Octavius, Sophia, Estelle, Alisa, and finally Princess Juliet Gwendolyn Antoinette Evangeline Diana of Windsor.

Even at a young age, Juliet has always been more on the mischievous side. And sometimes annoying. She loved keeping the nannies on their toes. She was either right in your face when you least wanted it, or no where to be found and causing everyone to frantically zoom around the large palace for her. She always was looking up to her older siblings, though, and genuinely would behave when they told her to. She genuinely did love the four, even though it could be hard to build a relationship with them. Octavius and Sophia were both were much older than the youngest princess, and although Juliet and Sophia were fairly similar, her older sister was gone by around the age Juliet was seven. Though, she did make sure to find a way to send her sister letters when ever she could and so at least there was that. Estelle was fine, and Alisa has always been... strange. Though, she still loved them all and looked up to them each in some sort of way. Not so much Alisa, but still.

The young royal's first magical incident occurred at the average age of eight, helping in her little need of attention. She was hiding from her nanny, but the woman was smart and knew Juliet enough that she was close to finding her. She would of if Juliet's magic hadn't casted a disillusionist charm or such on her, scaring the poor nanny sick. Juliet was gone for more than an a hour before finally reappearing and getting quite the scolding. This would lead to Juliet getting her Hogwarts letter when she was ten and ultimately attending the school like her siblings did.

At first, Juliet had wanted to go to school in Beauxbatons similar to her mother, but ultimately Hogwarts was the best fit. She wanted to be close to her family anyway. So Hogwarts is where she went and where she was sorted into the respectful house of Hufflepuff. At first, it was difficult for the princess to fit in with the school and deal with the big change... but was quick to deal and learn to love the place. Though, she's still quite the mischief maker and can often be found be scolded at by a teacher for one reason or another.

Add a photo to this gallery
Retrieved from "https://dumbledoresarmyroleplay.fandom.com/wiki/Princess_Juliet_of_Windsor?oldid=1039087"
Community content is available under CC-BY-SA unless otherwise noted.