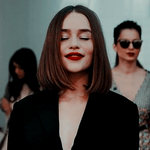 Clara is more political than she is human. Stubborn, independant and cunning, Clara rarely keeps her heart on her sleeve. Nor does she let her emotions take control and run wild. Though she doesn’t believe emotions are a weakness, and does believe they are just as important as anything else, she doesn’t believe that she should let others take advantage of if she displayed them to the world. Clara is incredibly driven though and does make her voice heard. She isn’t the type to keep herself in the shadows and likes to be at the front line, metaphorically speaking. Clara doesn’t like to rely on other people and is independent. It’s why she struggles with the idea of love and marriage, though she’ll eventually come to terms that it is necessary to rely on people. Trust, in a way, doesn’t come easy to her and she finds herself subconsciously believing no one would stay for her. That they will all eventually leave her like her mother did. She believes that there is always someone else that a person would rather be with and that she has to be loud to be heard. Maybe it was because of the neglect her parents showed her in comparison to her twin sister. Maybe it was because of how even her father rarely contacts her.

She believes in politics. Clara is the type to go out there and beg people to vote (if that was a thing in the wizarding world) and religiously keeps up with what is going on in the ministry. It was why she joined the ministry in the first place. Clara is desperate to have her voice heard and what better way than the ministry? She believes politics is an important topic and a person’s political stance always tells you who they are as a person. Clara has a strong moral core, though, and is cemented in her views and believes there is more she can do to help. However, she never believes all is lost. She believes that anything can be reversed and improved. Even the wizarding world. Clara believes that there is power in the people. Though the ministry is powerful and important, she believes that they are, first and foremost, the slaves to the people. It saddens how many people are indifferent to the world around them. Clara doesn’t believe in absolute power, however she accepts it but believes that whoever is in power needs to listen to the world around them in order to improve their world rather than gain power for themselves. Clara also believes in technology and does believe that if the wizarding world doesn’t bring themselves up to date with the muggles, then they risk being left behind in history. She believes that technology and magic together can build a stronger future.

However, this isn’t always what consumes Clara. Yes, politics is important but she knows she can’t mould her entire life around it. Clara does like to enjoy the world around her. Clara is very homely. If she wasn’t so career oriented and ambitious, she probably would have made a good house wife. Though, she would snap at you if you ever tried to suggest this to her. A perfectionist, she is very organised when it comes to her home and keeps everything in order. She even colour codes her kitchen cupboard to make sure everything is in the right place. She’s clean and hates to be surrounded by mess. Clara is also family oriented. Maybe because she never really had one. Though she doesn’t really believe she’ll ever settle down, she does enjoy dreaming about her own family. Hell, she even has a pinterest board for wedding dresses and baby clothes. Clara scrapbooks a lot and tries to cement everything in her life, the good and the bad, and would hate to forget about something she once treasured. Clara also likes the great outdoors. Clara loves to go camping and horse riding. Clara believes there is a lot that this world has to offer and that everyone should be able to enjoy it. She hates exercise, though, especially when it's planned. Clara can never stick to a gym, even when she tries, and hates running, or jogging–whatever you want to call it. Clara's actually rather unfit and has little muscle.

Kellman and Gyala met during their university years, with Kellman studying bio-medicine whilst Gyala specialised in chemistry, obviously both were heavily interested in the sciences, a trait that wasn't to be adopted by their daughter. They dated for nearly six years, both creating successful careers in Budapest during that time. It soon became apparent, however, that both originally came from the wizarding community. Kellman, though originally Hungarian, had studied in America, at Ilvermorny, hence why he never crossed paths with Gyala who studied at Durmstrang. Kellman's parents were incredibly well known within the wizarding community, however, with his mother being in the ministry whilst his father a successful auror. Due to their strict belief on their only child following one of their paths, however, they cut Kellman off when he made it evident he was to go to a muggle university. Kellman had lost touch with them and had removed himself from their influence through immersing himself in muggle society, for the moment anyway. Gyala, on the other hand, had quite open parents who supported her dream of following a muggle career.

Whilst Gyala continued into the muggle world, whilst living in the wizarding world, Kellman soon turned his attention onto healing, a career path that soon brought his own parents to reach out to him again. Though to his parents, Gyala wouldn't have been their first choice, she was a pureblood so that influenced their acceptance for her. Though Kellman was irked by their influence of blood status, he wasn't going to complain and potentially cause another fall out. Whether he liked it or not, he needed them, especially since he could barely support himself or his wife to be. They were married at 26 years of age and by twenty eight, Gyala was pregnant with twins. Clara and Nora. Nora was sick from the moment she left the womb due to nearly being absorbed by her twin. For some reason, Clara didn't finish the absorption and left Nora alive, albeit ill. For the next six years, Clara was almost neglected by her parents as they tried to keep Nora alive. Due to their dedication to Nora, it left Clara isolated and was soon brought under the wings of her paternal grandparents. That pair raised Clara, though they were careful to keep their political beliefs away from her as requested by Kellman.

Though Clara eventually aligned with her parents, developing a more open, tolerating, position to the muggle borns with little care for her own pure blood status, she did have a deep love for her grandparents. Enough that their death overshadowed the death of her sister. It was her grandmother who died first, with her husband dying only a week afterward out of heartbreak. Nora died only a month afterwards, when the two girls were eight years of age, failing to get over the flu, her immune system too weak to fight it off. Clara, never being close to the girl, didn't particularly care, but she was distraught over her grandparents, refusing to leave her bed. Kellman and Gyala took different routes to deal with their grief. Kellman turned his attention onto his other daughter, even though she was almost like a stranger to him, and tried to help her deal with her grief in order to distract himself from his own. Gyala, on the other hand, threw herself into her work and acted as if Clara didn't exist. Clara didn't particularly care.

By the time she was nine, she had her first magical incident through teleporting herself into a tree after being chased around by a bunch of kids at the primary school, having never been particularly that popular in primary school. When she was eleven, she was sent to Ilvermorny. Originally, it was going to be Durmstrang but with her parent's position on blood status, they decided Ilvermorny to match their values more than Durmstrang. There it didn't take long to become friends with the cocky idiot, Sean Spencer, who seemed to have the world kissing his feet. Best friends, they decided to 'date' in the first year of school, with the most scandalous thing they did was holding hands, until they realised they didn't really like each other that way and went back to being friends. When she was thirteen, her parent's divorced and Clara was left with Killman. After moving to London, Clara never heard from her mother again. Though she still haven't developed that close of a relationship with her father, she had enough a relationship with him to be satisfied with his company. She was sent to Hogwarts, being sorted into ––––. She was happy enough at the school, it was a new start for her. She was the top of her year academically and soon turned her eyes onto the ministry of magic, wanting to follow in her grandmother's path.

It was in her fifth year did she become friends with Alfred. She had known about the prince since she was born, who hadn't? Though she'd grown up in Hungary, the direct line for the British throne was internationally known. Not that she cared. She was never too bothered about going to school with the royals, even though a lot of other people were. The amount of times she'd listened to girls theorise on how to 'trap' the crown prince was ridiculous. Either way, they shared a few classes and became more than acquaintances in fifth after being paired for a school project together. Though they kept in contact the next few years, they didn't when they graduate, though Clara assumed they were still on friendly terms. She passed her NEWTs with flying colours and had the world at her fingertips when she graduated. She almost considered going straight into the ministry but instead she decided to wait, instead taking internships at a few wizarding companies before being employed at Wizco, specialising in electronics.

For the next seven years, she dedicated herself to the company, barely having a personal life. She was barely in contact with her father anymore and any romantic flings she had on the side usually ended when the other person found Clara too dedicated to her work, having it become the third person in her relationship. This didn't particularly bother Clara, she never really liked any of them to quit her work anyway. However, she had bigger dreams. She didn't want to be stuck in the company, though she'd have been content if she did. She had her eyes on the ministry and when she was twenty four, she decided to go for it. She resigned from Wizco, wanting to make sure she had no other option but the ministry. In her mind, if she had a back up plan then it could edge away at her determination to get the job. 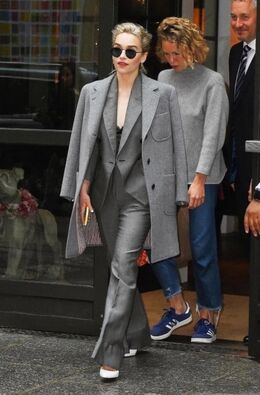 Retrieved from "https://dumbledoresarmyroleplay.fandom.com/wiki/Queen_Clara_of_the_United_Kingdom?oldid=1088750"
Community content is available under CC-BY-SA unless otherwise noted.