When RK was a little kid, he would always get into so much trouble for refusing to fall asleep when he was supposed to. His parents would always try their best to sate him with a nice bedtime story just so he would calm down and eventually feel drowsy. He hated it back then — being required to go to bed at a certain time while the grown ups get to stay up as long as they wanted to. He always did have a very curious, inquisitive mind, which is why he's always up on his feet, searching for the next great thing, for the next big adventure. He retained these traits as he grew up, and while it was - for all intents and purposes - nerfed because of his developing maturity, he was still pretty much the same ball of sunshine he was when he was a little kid, albeit being a little bit cooler, calmer, and reserved on some ends. Needless to say, RK was - is - a social butterfly who's extroverted (obvi), friendly and generally a nice human being.

If one were to look closely, they would see that RK is actually quite rebellious. Not really in a negative sense, but more along the lines of refusing to be caged by too many rules. This fact stems from his hate of the 'bedtime policy' when he was little boy, and is something that he brought over to his teens - but this time with a more different focus. As a result, RK is open to breaking some rules - though not to the point of hurting other people - especially if it entails having fun (i.e. roaming the halls after curfew, using magic outside class, etc.). This mixes in well with his adventurous side, which also connotes getting into trouble a lot. It's no secret that RK is a frequent receiver of detention, and his parents reprimand him often for it, but he doesn't care. At least he gets to live his life the way he wants and not just merely exist.

The Ollivanders were usually a British family. A family that rarely strayed out of the UK. Except one branch. It was during 1900s, when Grindelwald was terrorising the magical communities across the world, that an Ollivander, a girl no older than sixteen, was forced to flee the country. Her parents were killed and they had been rejected by her family a year before. The daughter felt no attachment to the family and so she decided to run. Run to Corinth in Greece and start a new life. Subsequent generations stayed there, though they kept the Ollivander name out of stubbornness. The first ever children in this branch who exited Greece were sisters - Eirene and Merisa. The moment they could travel, they did, going to an exchange program at Hogwarts, much to their family's disdain. Afterwards, they went on separate paths. Merisa ended up in New Hampshire, where she met a young Italian-American professor, Gianni Townsend, and fell in love.

Gianni was a muggle, and had no idea about the workings of the wizarding population at all. Merisa tried to tell him a couple of times, but could never work it out, so she simply resigned and decided to omit that part of her from him. It never got in the way of their love though - they got married and soon had a son that they decided to call Ryan Kristofer, or RK for short. RK was their bundle of joy, and he himself was a literal bundle of joy. Always full of energy, his smiles could light up their entire household. RK pretty much had a great childhood, and he felt truly loved by his parents. He didn't have any siblings, so that's probably why; he had their undivided attention on him the whole time.

When RK was eight, his father got an amazing opportunity to teach at the University of Oxford in England. It would entail moving their family across the Atlantic Ocean, and he was unsure if his wife would like that idea. Ever the supportive wife, Merisa told his husband to take the job cause he might never get another opportunity like that again. Deep inside, she also knew that she had to reveal her true lineage to him and their son soon. Conveniently enough though, a few days after they've officially moved into their new home in Oxford, RK showed his first sign of magic, levitating his kite that got stuck in a tree so that he could have it back. Merisa chose that moment to reveal everything to his husband, who was understandably befuddled at first, but being his liberal self - and a history professor at that - Gianni did not have that much trouble accepting it. In fact, he had so many questions and was so interested in everything that Merisa could not help but let out a relieved sigh.

RK was excited too. There was a whole new world out there and he couldn't wait to explore it. When he turned eleven, he finally received his Hogwarts letter and was so enthusiastic about it. He eventually got sorted into Gryffindor and he's been having a grand time learning about magic since then. He is now a sixth year student. 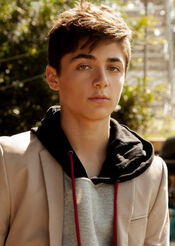 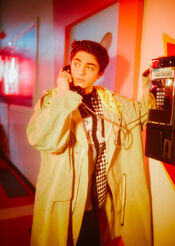 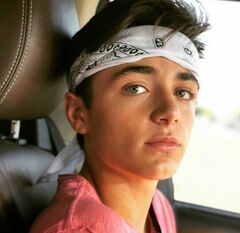 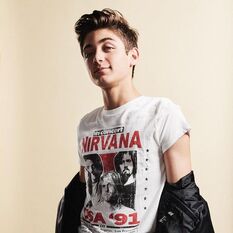 Retrieved from "https://dumbledoresarmyroleplay.fandom.com/wiki/RK_Townsend?oldid=1062376"
Community content is available under CC-BY-SA unless otherwise noted.