Rashida Zidan is a Pure-Blood witch of Egyptian and Montenegrin descent. She is the daughter of Sabra Emad and Fadil Zidan.

A few weeks after her sixth birthday she showed signs of magic, which Jaddo (her grandfather) could not be more proud of because it was conjuration, a family specialty. She performed a simple water-making spell after she burned herself stupidly playing with matches. As she instinctively moved to put her hand over the burn she was covered in water. It scared her a great deal causing her to scream louder than she had at the pain of the first degree burn she was suffering from. Her grandfather began training her in multiple branches of Transfiguration the following year. She started flying when she was five years old. She aspired to be a part of the Armenian Junior Nationals Quidditch team before she was seventeen. Despite what her father, and grandfather told her she thought she would be eligible if she could demonstrate enough talent in the sport. She fell off her broom multiple times, and has broken her fibula, tibia, and femur on more than one occasions. When her pelvis was believed to be shattered it caused a lot of chaos as a few of the local healers believed she was being abused before they recognized the name; who her family was, and more importantly who her mother was.

When she was born she became an integral part of a family with a longstanding tradition among them, arranged marriage. Her intended husband, Sobek Aten, used to fly with her when she was younger. She remembers this, because she was a better flyer at the time, he ended up being the stronger beater. Both of their families took pride in their being able to fly, and begin making use of their training early. She used to be jealous of him, until he showed her a little trick, she felt a little differently about him after that. It was because he choose to help her rather than forcing her to figure it out for herself. He did something she knew that Walidy (her father) or Jaddo (her grandfather) never would have in that exact same position. Her father was the close and personal friend of several legacies of famous members from each one of the National quidditch teams in Africa, making Rashida "family friends" with many IQA descendants among the African National teams. When she was of age her betrothal to an old childhood friend from her days a girl was announced to the people of her community and quidditch society. Walidy (her father) and Jaddo (her grandfather) had an extravagant celebration for her on that day.

Rashida received a token from Uagadou one night, and she graduated several years later. She has demonstrated a limitless aptitude for Flying and Wandless magic in those years. She was not a focused student, however her behavior changed dramatically over the years. When she, and Sobek finally began to get over the slight to free will, she still did not think he was over it, her marks improved greatly in a short time.

She was again not granted emotional or financial support to play quidditch professionally once she graduated, unless she married Sobek, as she should have when she was 14. The little thing he did that one time stuck with her. She thought he would not be like the sort of person she expected him to be. She was used to men being exactly like Walidy, like Jaddo, and all their friends. She knew he was not going to be like she thought all quidditch guys were, at least not with her. Sobek, he was different. Rashida was positive that Sobek still objected to marrying her, no matter what he says about that, she knew that he did not like her at first. She believed he might regret being her husband one day. She was not going to be disappointed, and she was not going to be a disgrace to her father as a divorcee.

She was interested in playing quidditch professionally like Sobek did/would. Like her father, and her mother did. She expressed it to Walidy (her father), and Jaddo (her grandfather) by being remarkable at not one or two different positions, she learned to play three; Keeper, Beater, and Chaser. They still refused to support her if she was not willing to exercise her mind as well. She was forced to spend another year improving her marks which resulted in her excelling in most academic subjects, receiving her highest marks in Astronomy, Alchemy and Self-Transfiguration.

She agreed to marry Sobek, after they retired from pro quidditch. They were married on the 31st of December 2030.

She took up quidditch on a professional level after she graduated from school. There were two consecutive "gap years" of sorts where she left Africa all together. While Sobek stayed behind to play for the Patonga Proudsticks, she backpacked around the world. She never worked a day in her life, and so, she had no money to call her own. When she was not bunking with old friends from school, she found 'budget-oriented sociable accommodation' wherever she could. Jaddo (her grandfather) easily provided for everything she needed. He would never appear to disagree with his only son by helping Rashida get on a professional quidditch team, but he would help her find a way to do it all by herself. She went to Asia, where she trained with Beaters from the INQT. After six months she left for North America where she trained with the Beaters from the CNQT as well. With her skills steadily improving she spent a year in Oceania with the Beaters of Fiji.

She returned to Egypt with a fire in her belly she never had before. Her position on the team fluctuated between her specialties before she could settle in as Beater with the ENQT. She was a gritty heavy hitter, and played with emotion. She had a trick that made her more deadly than the Beater beside her. She protected her teammates as if they were her family. She did not have the power to keep them from getting hit if they were not making an effort, but she was determined go hit for hit with her opposition for days, and love every minute. She began aiming for targets in direct correlation to how her teammates were hit out of rage. Sobek pointed it out to her once in practice, and she denied it. She sometimes suffers from a strange form of "tunnel vison" on the field. It has been less of a hindrance to her, in her line of work, she swings a wooden bat at iron balls aiming to injure, hurt, or main people for money.

Following a disastrous debut in the World Cup, which resulted in a first round elimination against the Japanese team, Rashida and Sobek further discussed the details of their impending wedding. They had a small reception in Hyde Park, followed by a much bigger, more extravagant, very traditionally Egyptian wedding along the Nile. They celebrated with family, and friends who still reside in Egypt, along with guests willing to make the long trip at a pre-wedding hammam at a beautiful resort in Cairo. Their firstborn was conceived on their wedding night, they decided to name him Horus, although Rashida calls him Hero. He was born three weeks late Rashida blamed herself for travelling despite being told she needed to be on bed rest, and refusing to schedule a C-section. She knew he would come out when he was ready, and he did. Horus Sobek Aten happened to do so at a Halloween party in Rashida and Sobek's honor.

Rashida appears to have a standoffish demeanor. She always has a certain look on her face, a cross between annoyance, and boredom. She has a serious side that seems to dominate the majority of the time. This is her armor and she wears it at all times. A good joke, or a kind gesture is the sincerest way to break through her chainmail. She is typically a quiet person, more of an observer than a participant. She can be rather talkative when the right topic has been found, or when with the sort of person willing to take the time to break down her walls.

Rashida has a fairer pale brown skin complexion, accented by many little freckles that cover her face, neck and arms. She has perfect eyebrows, and beautiful eyes; smoky, mysterious, gleaming russet brown. She does not remember her natural hair color, she dyed it all sorts of colors for a few years before she started using charms. She realized late how damaging the chemicals were to her hair, ruining the follicles before learning about a few helpful cosmetic charms. She still utilizes many of those same charms to this day alternating between changing her hair color between shades of brown, and black, as well as re-growing, and thickening her hair. 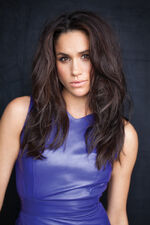 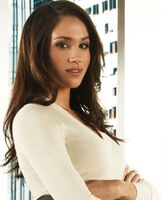 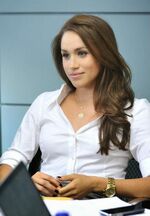 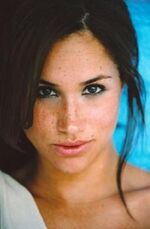 Retrieved from "https://dumbledoresarmyroleplay.fandom.com/wiki/Rashida_Zidan?oldid=786031"
Community content is available under CC-BY-SA unless otherwise noted.