This character belongs to Ck

Hope Finch discovered she was pregnant at the most inopportune time, ever. Her fiance, Rex, had taken off and gone who-knows-where for who knows how long. Regardless, Hope attempted to put on a brave face as she started her pregnancy. She struggled to accept help from people, living with her friends Bronwen and Kris for much of her pregnancy. It was while Hope was pregnant that she got her job at St. Mungo's, and it was just before securing the job that she found out she was having a baby girl.

For the first year and a half of her life, Regan knew Mama and Beebee (Phoebe White, Hope's roommate), primarily. It was shortly before she turned two that she was introduced to a new figure-- Daddy. Rex had returned. Shortly after Regan turned two, Hope and Rex got married. Regan loved her Daddy. It didn't take her long to figure out that Daddy almost never said no, and if he did, big crocodile tears quickly turned that no into whatever it was that she wanted. For a little while, it seemed Regan would have a complete family-- Mama, Daddy, her... and the new baby that was growing in Mama's tummy. Then one day.... Mama seemed really sad. And she couldn't tell why. She asked about the baby, but it seemed there wasn't one anymore. That didn't bother Regan as much as the fact that Daddy hadn't come home in a long time. That bothered her a lot .

Not long after Daddy left... but a few new people entered Regan's life: Ferlen Black, and his daughter Rose. Regan became very confused, unsure what was going on between Mama and Ferlen. He was around as much as her Daddy used to, but she didn't call him Daddy, because Mama hadn't introduced him as Daddy. Yet... Rose was calling her Mama, well, Mama. Soon enough, that all got sorted out--- Mama and Ferlen got married, and Ferlen just became Daddy, all was well in the fifth year of Regan's life.

Just before her sixth birthday, Regan got her first signs of magic after a fight with Rose. She'd been painting, and her emotions got the better of her, sending paint splattering around the room.

Regan is very imaginative. She inherited her biological father's talent for art, and she loves drawing. Besides being artistic, she's very intuitive, easily seeing how her actions will affect those around her, as well as the actions of others. She's also very good at reading people's emotions. She uses this to be be nice when she feels it will benefit her... but most of the time she just uses it for extra information. Like her biological father, she believes in the power of spontaneity, and she hates being tied down to a schedule. She is a champion for people around her-- she'll usually stand up (rather vocally) for people who are being knocked down. 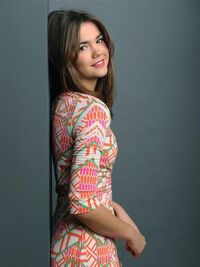 Regan has kind of a small face and brown eyes like her Mum, but the mischievous look that plays across her features in her eyes and mouth comes from Rex. Her brown hair is similar to Rex's, and Mum has never really been able to explain the freckles. Her face claim is Maia Mitchell.

*Regan grew up knowing nothing about her notorious uncle, Lucas Finch. Hope never mentioned him, and saw no reason to.

*Her Myers-Briggs type is ENFP. She typically loves to be around people-- but if she's working on an art project, she really wants to just be left alone.

Retrieved from "https://dumbledoresarmyroleplay.fandom.com/wiki/Regan_Black?oldid=1075793"
Community content is available under CC-BY-SA unless otherwise noted.