Rex Shaw is a Pure-Blood wizard. He was born during a rare conjunction of 7 celestial bodies. His father Geoff Shaw, an astronomer, and his mother Melinda Taylor, an artist and photographer welcomed a healthy baby boy. They named him Rex Dominick Shaw. His birth was right on schedule, during a planetary alignment his father was more excited about then the birth of his son, his mother, was less enthusiastic about the stars.

Rex, in the eleven short years before he was sent off to school took notice of his father's love of astronomy, and would sit out with Geoff nightly. Together, bundled up in the freezing cold, drinking hot cocoa, and drawing constellations. It took only a few more years for Melinda to notice her son had inherited her artistic abilities, Melinda was an extraordinary artist. Now that Rex had something in common with his mother other than good-looks, his days were filled with blank canvas, and paint, and his nights with cocoa, and shooting stars. It was a pretty good life for any kid, until he turned seventeen. His preteen years were rough, he began to 'bump back' with more veracity. Disobeying not only his parents, he was callously testing the mettle of anyone who dared tell him what for. 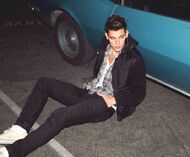 He was disowned for simple fraternization with what the Shaw family call 'lesser beings'. As is customary in any upstanding Pure-Blood house. Half-Bloods, Muggles and Muggle-Borns, Half-Breeds, Creatures/Beings, and so on, and so forth were all disapproved of. Rex knew better than to ever associate himself with anyone who was not Pure of blood, or non-human for that matter.

Like the blood in his veins compels him, Rex is, and always will be the type that likes push his luck. He cavorted with Muggle girls, he befriended Muggle-borns, and Half-bloods. He was seen socializing with them in public no less, on more than one occasion. In doing so, he pays the price. Blasted from his own family tree he has squandered the financial means, and social standing of the good name Shaw.

He was making a living for himself as a model in the muggle fashion world, it was through his peers, and colleagues he rediscovered his passion for art. His friends had tattoos, terrible ones, and although Rex would never mar his perfect skin, no one can deny he has an eye for placement, and a very steady hand. As of late 2021 Rex was putting his own artistic skills to use as a Wizarding Tattooist.

Rex didn't think that the money coming in from the legit tattoo shop he ran was going to be enough to provide for him and his future wife Hope. He lived comfortably before her because it was just him. He took a modeling job for a campaign in Málaga hoping it would pay off. 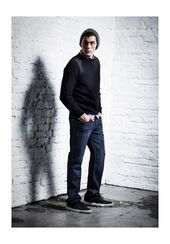 He traveled all that way to Ronda for his second break only for it to turn out to be a trap set up by his mother Melinda. Something he never thought she would go through with. She hates Muggles, inserting herself into their world just to find Rex was completely unexpected. He never thought she would stoop so low. She planned to have Rex killed. She had him dropped off the 60ft. cliff he was dangling over during the photo shoot. Rex, and many of the other models were already inebriated at the time, some of it from partying the night before, some of it from that same morning. Him falling was going to be more believable than his survival would have been. But he did not die. Rex suffered a lot of injuries, and had to recover in a muggle hospital in Málaga. He was told he had retrograde amnesia. He barely knew who he was. He had forgotten about Hope, but not completely. He always remembered sunflowers.

With the help and dedication of old friends Barney Pierson and Orianne Edmond, Rex eventually remembered parts of his life, and that he was a wizard. A great deal of Rex' memories from his past are still damaged, broken, and in need of mending.

Hope is Rex' wife, and the love of his life. He is embarrassed to admit she almost got away because he let her. Rex met this peculiar sunflower at the Leaky Cauldron, after introducing himself it didn't take long for his charm to present itself. He said himself that he was trying to impress her and that he was flirting with her, he also contradicted himself claiming that he didn't want to make her his. Which they both now know was a lie. He hurt himself in the process of what he called "protecting her". When she gathered her courage first and came to him, he took everything back, telling her the truth. Telling Hope the way actually he felt about her.

Rex and Hope embarked on a whirlwind romance, they traveled together to some of his old haunts along the Southeastern United States. Almost immediately on the return home Rex did what some of his American friends would have thought unthinkable for him. He proposed, and Hope accepted. The couple were supposed to be married on the 18th of September 2022.

Regan is Rex and Hope's daughter. He has been introduced to her as "Daddy", and when he hears her say it his face could break in half from the smile that forms. He has learned she is a lot like him. As she should be, she is his daughter. Too much like him for his, possibly her own good. He fears Regan will hate him one day, the same way if not more than he hates/hated his own mother. Because of this fear he is very lenient with Regan tending to give in, and get for or give to her anything she wants if she cannot get it for herself.

Clyde and Rex are cousins, their father's are brothers.

Coriolanus is Hope's grandfather, Regan's great grandfather. Other than him and Clyde the Fincha - Shaw family is a bit light.

Melinda and Geoff are Rex's parents, former family members he would say. Rex thinks that he still has some sort of relationship with he dad. They don't talk as much, but he dad does send him constellation charts every couple of months. His mother's last words to him were "I have no son." He does like to show up around the family home in New Hampshire to rub it in her face, the only way she could ever erase him would have been to kill him and she wasn't going to do that.

Melinda did try to kill Rex, and she almost succeeds. He has no idea whether she will try again or whether she knows he survived.

He can be very arrogant, the kind of person that lives under the impression that all eyes are on they at all times. He has also been known to show a sense of nobility that is very rare in his bloodline. The choice Rex made to socialize with the "lesser beings" as he family considers any one who is not Pure-Blood was often him choosing coming to aid of a younger person, male or female in the midst of harassment than to blindly follow the same hardcore Supremacist values of his mother.

He was the pride of his family, Rex Dominick, his name was chosen because it means 'King of the Lords'. In a very long line of Pure-Bloods, with the all too common reputation for removing those who no longer carried themselves as "true, and perfect" Pure-Bloods, Rex has become nothing more than another burn mark on the family tree.

Rex is a gifted artist he started drawing when he was very young, since the first time he put pen to paper he hasn't loved anything else. He has his own preferential style, surrealism which he can to appreciate during his foray into the muggle world.

Rex knows what he needs to on the topic of Transfiguration, he knows how to protect himself, he has learned to apply a number of techniques into his tattoo work. He is able to make use of Transformation, and Vanishing spells with ease. Human Transfiguration plays a large role in his career.

Rex is no more skilled in Charms than Transfiguration. A master of the basics, he can cast a shield, and he is pretty sure he might have a patronus something masculine, and hairy. He is capable of performing mostly protective, defensive and few offensive spells.

He thinks his boggart is Regan hating him so much it makes Hope hate him too.

Bronwen and Rex worked together at The Human Canvas, she was his first hire. Rex liked Browen from the start, she is smart, confident, and she has a little edge to her. He tried to keep their relationship professional because he was her boss, even though she knew more personal details about his romantic life than he wanted her too.

Ryder and Rex met at a restaurant, Flood. Ryder and Rex have similar personalities. They "found" each other because they were both working rather than eating. Rex was taken aback by the uncommon ability Ryder has to sense things from people. Rex has never been one to have a lot of friends, Ryder would have been considered one of the few.

With his girls at the apartment

Painting at the Arthouse

Food shopping at the market

Retrieved from "https://dumbledoresarmyroleplay.fandom.com/wiki/Rex_Shaw?oldid=588266"
Community content is available under CC-BY-SA unless otherwise noted.