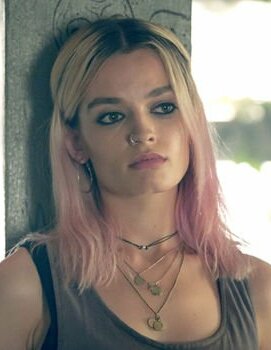 Riley Lynwood did not ask to be a witch — thus, she didn't ask for this school, either, or everyone wanting her to be a part of their self-constructed 'social groups.' If she makes a friend, she wants that relationship to be organic, to grow naturally through her own discovery instead of insistence that she just has to be friends with all her friends' friends. Being half-blood, she likes to call this insistence 'The Facebook Theorem' — you end up adding vague acquaintances you barely know, until you have an inordinate number of friends that doesn't reflect your real friendship circle at all and you're staring at the reminder for someone's birthday thinking, 'who's that?' ( 'The Witchagram Theorem' just doesn't work as well, but she has to make do or she'll spend far too long explaining to the pure-bloods what Facebook is.)

The point is, being sociable for the sake of it doesn't hold water for Riley. If she enjoys someone's company, she'll pursue it, but she doesn't feel pressure to interact with people indiscriminately, or even withhold her opinion — she'll often speak it, no matter how blunt, which doesn't endear her to the more easily offended. Not that it matters, if you're too easily offended, she doesn't want to befriend you anyway.

She has an inquisitive mind that takes her to many places, from introspection to questions about the state of the world. Thus, she can often seem lost in thought, which can come off as distractedness or simply that she's ignoring you. If you're wondering which, it's probably the latter if it looks like she's boring holes in the far wall. When her mind gives her peace, however, her energy is diverted to noticing, if she cares enough to (which is, in itself, its own variable) things from slight jaw clenches to emotions shining in eyes. While she may not want to befriend all those around her, Riley Lynwood has a startling ability to read people; perhaps why she's earnt the nicknames 'The Human Polygraph' with her non-magical friends, and 'Veritaserum Incarnate' with her magical ones (though the latter could likewise be linked to her own penchant for brutal honesty.) She's more organised than she might appear from her disregard of the dress code, pink hair and tattoos she got done by a Stateside friend — she despises a mess. Quite the definition of 'looks aren't everything', is our Riley; looking at her, you'd likely expect to find not the intelligent mind she possesses, but rather the next Southside Serpent. (She'd never join a gang. Riley may disregard rules she sees as pointless, like the dress code, or things she believes should be her own decision, like the tattoos, but to borrow from Rosa Diaz, she's a badass, not an anarchist.)

The primary problem with Riley's active brain is the anxiety it brings in its wake. Not in matters of social interaction, no, but in others. An anxiousness to do well, and a fear of what will come to pass if she does not; a desire to try and uncover as many of her talents as she can before it is too late; but primarily a fear of people figuring out what really goes on in her head. For someone who puts such an emphasis on honesty, and is outwardly flawed in many ways, that appears to be her own standard of perfection within which 'anxiety' just doesn't fit. It has been largely ignored by her family, and she is adamant to live by the old British saying 'keep calm and carry on', as her grandmother would say it.

There's a comfort for her in planning, in not having surprises that rock her boat — in planning, as long as routine and structure don't restrict her. Anyone or anything that restricts Riley from following the beat of her own drum is going to find her fighting to get out of it. While people may find her to be arrogant and judgemental due to her bluntness, if people try hard enough they could well find themselves an insightful friend in Riley Lynwood.

Riley Emersyn Lynwood is the result of an affair, which was, in turn, the result of two equally unhappy marriages — one magic, one Muggle — which came together, in a way, to form one indulgent one-night stand between Quinn Lynwood, a witch, and a Muggle man named Frederick Algood. And, as already stated, the result was one half-blood girl: Riley Emersyn Lynwood. It should be a credit to both, in some way, that the pair wanted to have a hand in raising this child, but this was of course made difficult by the fact that she was the byproduct of an affair. Quinn had left her husband the moment she found out she had become pregnant, unhappy and likewise fearful of his reaction, moving from London to a cottage in the Yorkshire Dales, nestled out of sight and with protection charms to keep unwanted souls away. (Perhaps this is where her daughter's selectiveness in company came from: her Yorkshire Dales hermit mother, which is both her mother and Riley's endearing title for Quinn, when not claiming her to be Queen of the Yorkshire Dales. Riley was quite happy before Hogwarts came along, just being Princess of the Yorkshire Dales.)

One of the wanted souls was naturally her father Frederick, who had remained in the bustling city of London. Riley lived permanently in the Yorkshire Dales, but her father was allowed to visit, and for the first few years there was no quarrel with that. When Riley was four and Frederick had separated from his wife, Quinn relented, and allowed Frederick to take her to London on weekends to visit his family. It worked better, anyways, with him being around the cottage less, meaning Quinn didn't hide her magical abilities so much. She was home-schooled at the cottage, allowing for a magical education as well as a more mundane one, and Quinn trusted more in her own abilities than that of any primary-level teacher anyways. It didn't matter if she told the Algoods — who would believe her, anyway? They'd think it was the imaginations of a little girl, and she certainly wasn't going to correct them.

Frederick was keen on taking her places. America, Iceland, Australia — the diplomat's salary he got upon landing a new job more than paid for all that. But at the end of the day, Riley was always relieved to return to the Dales, her and her mother's little kingdom. It was there, too, that her first magical sign occurred at the age of six. She seemed to have quite accidentally conjured the flag of Yorkshire on a long pole lodged in their chimney. Quinn moved the flag so that they could still have it while also being able to make decent use of their fireplace, and to this day it still flies proud atop the roof of their little house. Naturally, though, this manifestation of magic panicked Quinn in several ways. She tried to rescind their daughter from her father and his family, but he arrived, demanding an explanation, and Riley threw herself into her father's arms so animatedly she could bring herself to do nothing but explain. Frederick didn't exactly take this in stride, leaving in a huff believing that Quinn thought he was some kind of fool, but once Ministry representatives visited to corroborate her story he accepted it, and resumed their co-parenting agreement.

This continued mostly without incident until the eve of Riley's eleventh birthday, at which time Quinn and Frederick were together for their daughter's birthday. They had been growing closer, and both knew that Riley was hopeful her parents would forge a real relationship like that of her small friendship circle. (Small. She was selective, and both parents liked that. She vetted them so they didn't have to.) It was then that Quinn explained Hogwarts, to which Frederick reacted less well than she'd have hoped, but no better than she'd have expected. It took several hours for them to come to common ground that they wanted their daughter to have the best education possible, and Hogwarts was where she would get it. This deal was made in return for Frederick being allowed to take her on longer holidays during summers, which was a small sacrifice for her daughter's proper education in Quinn's mind. Upon arriving at Hogwarts Quinn was sorted into Slytherin House, and became known for her blunt nature, ability to read people and selective social circle as well as, of course, her occasionally cynical intellect.

The once dubbed Princess of the Dales aims to make a name for herself in the magical world as she enters her fifth year — with pink hair and magical tattoos from America she probably shouldn't have gotten, she's already got a fairly strong outward self-identity.

WIP
Add a photo to this gallery
Retrieved from "https://dumbledoresarmyroleplay.fandom.com/wiki/Riley_Lynwood?oldid=1038589"
Community content is available under CC-BY-SA unless otherwise noted.