Ronald Westbrook-Danesti "Gutterson"
The Mercenary of No Contracts
(Gutterson is role-played by Sophia.)

Gutterson, born Ronald Westbrook-Danesti, was born to an American wizard and an Ukrainian witch. Gutterson was born more Ukrainian than American, making Danesti his more dominant last name. He was a rather mysterious guy, and his parents never figured out what is with him. He kept to himself, primarily because of who he was.
His mom sent him to Hogwarts when he turned 11. The Sorting Hat put him into Ravenclaw, because of his strong and silent personality. He had never left Hogwarts ever since. He often has a hard time away from his family. He learned much over his years, and when he came back to Ukraine, his dad had passed away. Unsurprised from it, he got over it in a few days.
After graduating from Hogwarts, Gutterson was relatively silent for the time being. Few know what Gutterson ever did in his life outside of Hogwarts. Some say that he did nothing but stay home all day. Others believe that Gutterson had a job. He didn't.
At present, Gutterson is seeking to get a job as an Auror. He believes that Aurors are rather important to keeping the balance between Muggles and Wizards and Witches.

Gutterson is the rather strong, silent type. He likes not to talk and has somewhat of a hard time feeling emotions. He is the kind of guy who just lets everything go on as is, and he likes not to disturb others, unless he has a reason for it. 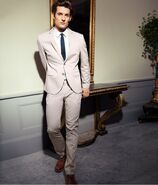 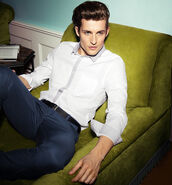 Add a photo to this gallery
Retrieved from "https://dumbledoresarmyroleplay.fandom.com/wiki/Ronald_Westbrook-Danesti?oldid=1020398"
Community content is available under CC-BY-SA unless otherwise noted.