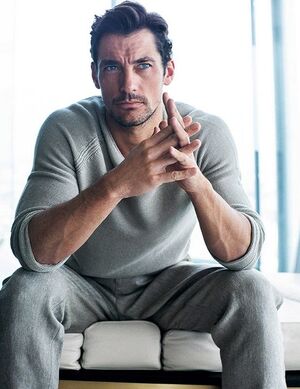 Sebastian is a strong, hard-headed individual who's settled in his ways. He knows what he wants out of his life, and despite being single he's grown used to it. He wants a family like anyone else, but knows that if it's not meant to happen then he's okay with it.

Being a MediWizard means that Sebastian has seen some pretty bad things, and over the years he's gotten somewhat numb to seeing blood and gore since it's apart of his everyday life. Surprisingly it's also helped Sebastian become more sympathetic and emotional, as he's usually the one who has to break the news to the families. He's also very analytical thanks to his profession as well, and it's kept his mind sharp.

When Sebastian isn't working, he's just a normal everyday guy. He's mostly home watching cooking shows and trying to replicate what he's watching, or he's making a craft to keep himself busy. Sebastian is a kind fellow who's curteous to others and believes in chilvary, always treating ladies right and opening doors for them or giving them his seat.

Sebastian isn't a pushover and will stand up for himself, and he isn't afraid of a fight if it comes down to it. He doesn't appreiciate bullies or people who think they're better than everyone else, and believes that everyone is equal and that everyone has value.

Sebastian was born to a middle-class, pure-blood family in Manchester, England. He was the oldest child of four, with two younger sisters and a younger brother following after him. His parents were normal folk with normal jobs, his dad was a chef and his mother was a seamstress.

Sebastian grew to love cooking thanks to his dad, who allowed him to help make dinner everynight. His mother helped Sebastian to knit, and make crafts. He was a very creative boy who had a lot of dreams, like every child. But in grade school he was bullied for being a boy who liked to cook and knit, and it made him supress some of those feelings.

He took the issue to his parents after it got too bad, and his parents immedatiely went to the principle of the school to get everything sorted out. They found out that the girls who were bullying Sebastian came from broken households, and so his parents set out to help them. After a year, they were able to help get the families into some financial stability, and Sebastian befriended one of the girls who became a lifelong friend of his.

Sebastian's first sign of magic came when he was playing with his friend, Florence, both of them 8, and she didn't see a hole in the ground when they were running. She twisted her ankle and Sebastian panicked a little, but in an instant her ankle was healed like nothing had happened. They were both confused, and when Sebastian told his parents they were thrilled.

Sebastian got his letter to Hogwarts and was sent off, being sorted into Gryffindor and surprisingly his friend Florence who was a muggle-born got a letter to Hogwarts as well. She was sorted into Slytherin, but both remained friends nonetheless. Sebastian thrived in Hogwarts, and loved when his siblings soon arrived. He just thought that everything was so fantastic, and that how could anyone live without magic.

When it came time for him to graduate and be thrown into the world of adulthood, he had no idea what he wanted to do. A friend of his told him that the ministry was looking for Obliviator's, and he thought that seemed like a good job at the time. Taking the job so young took a bit of maturing for him to get used to, but in a few years it was just normal to him.

It wasn't until he was 20 that he wanted to be a MediWizard, hearing that Florence was training to be one sparked his interest in it. He started through the same training she was, and despite the struggle of balancing his job and work he was able to make it through and graduate with her. He was a licensed MediWizard on his 26th birthday, and managed to also keep his Obliviator job at the ministry.

Currently, Sebastian lives alone in an apartment in Magus Diaetam and his days are full with work and hobbies. He feels like he's drifting through life at this point, and is starting to put himself out there a little more with the help of his siblings and his friend Florence. He doesn't know where life will take him, but he's sure that wherever it is it'll be the right thing.

WIP
Add a photo to this gallery
Retrieved from "https://dumbledoresarmyroleplay.fandom.com/wiki/Sebastian_Hall?oldid=1008824"
Community content is available under CC-BY-SA unless otherwise noted.