Breakeven by The Script

Licks lips, Plays with bracelets, Blinks a lot when angry

Soren is an entitled son of a bitch. He's rude to any and everyone because he thinks he can get away with it. Maybe that's the wrong thing to say because he does get away with it. Whether it be his charming looks, his haughty attitude, or his tragic background - people let him get away with acting like a brat. So he does. The only time he might be kind to you is if he's attempting to flirt, but even that isn't a given.

Although he is an ass on the outside, he's still an insecure boy seeking validation on the inside. He actively seeks approval from everyone around him even if he likes to play things off like he doesn't care. He takes things to heart and won't stop until he's fixed whatever people find wrong with him. You can really see this manifest in his acting. One negative comment from a director and Soren will work tirelessly until he has the scene down pat. He's a closet perfectionist.

Soren is also a closet romantic. He may seem like love doesn't matter to him and all he wants is a good round of sex, but he's a true sucker for romance. He's not one to help people unless it comes to love. You ask him to pick you up after getting a flat tire? Hell no. But if you need help confessing your undying love for someone - Soren is more than happy to help.

Soren is passionate about everything, and in turn, very dramatic. He puts his all into his performances and the audience can tell. That's why he's so popular. The passion he puts into acting is unparalleled. Unfortunately he takes the drama to the real world too and doesn't mind causing a scene. He is a drama queen in every definition of the title. Eh, it can't be helped though. What can you do?

Ultimately, Soren acts like a snot-nosed child. He's very childish and selfish, thinking his problems are the only ones that matter. He wants things his way and if things don't go his way, he pitches a fit. Soren can also be very naive at times. He's quick to believe whatever you say or marvel at your expertise. You throw a Dr. or Professor in front of your name, he's 100 times more likely to listen to you. Also like a kid, he craves validation. He wants those gold star stickers and a piece of candy. Unfortunately he also acts extremely entitled, like the world owes him everything and more. And in his mind, it does.

Jung Soeun and Lee Hyunjoong were friends with benefits. Actually, you couldn't even call them friends really. They simply screwed around sometimes. They weren't married and the prospect of that would make them laugh. They didn't get along and had no romantic feelings for one another. They just liked how the other was in bed. So when Soeun became pregnant, both freaked out a bit. Soeun wanted to have an abortion and Hyunjoong just didn't want to be involved. He didn't care if the baby was aborted or put into the system. He just didn't want responsibility. Unfortunately, his mother was not having that.

Hyunjoong's eomma threatened to cut him off completely if he were to give the unborn baby up. Hyunjoong was accustomed to a certain life style where he lived quite luxuriously. He was careless and unwise when it came to spending money. Mostly because the money wasn't his. It was his rich mother's. So being cut off wasn't an option. He convinced Soeun to have the child and she agreed on one condition: she can leave the baby with him and run away with a bag of money. Hyunjoong agreed to those terms.

And that's what happened, Soeun had the baby and a few days later had run off to another country with a heavy wallet. Hyunjoong was stuck with the child he didn't want, but at least he still had money. Hyunjoong's mother was the one to actually name the baby and take care of him. His name was Soohyun. He was more like Hyunjoong's much younger brother than his son. Even then, Hyunjoong didn't love him like a son or a brother. He genuinely tried to forget the child's existence. Believe it or not, those were the good times.

When Soohyun was only five years old, his grandmother passed away. That left Hyunjoong a child he didn't want to take care of and a will that he wasn't a part of. His mother had merely left him a modest home to raise Soohyun in and enough to sustain them for about a year. The rest of her fortune was given to Soohyun for when he turned 16. Needless to say Hyunjoong was livid. Unfortunately, he took it out on Soohyun. Poor Soohyun just wished things went back to when his father ignored him completely. At least it was better than this.

The next year when Soohyun was six, he made things even worse for himself. His father was yelling at him and hitting him for Merlin knows what, and Soohyun just wanted it to stop. That's all he could remember thinking before a glass bowl flew and crashed straight into Hyunjoong's head. He was disoriented and now bleeding, but he remained conscious. Once he realized Soohyun had done it but hadn't even moved, he became angry and afraid all at once. His son was a freak. From then on, Soohyun's beatings and punishments came more often and more extreme.

That's how he lived. When he wasn't off to school at Mahoutokoro, he was at home being abused by his father. He became numb to it after a while. Instead of fighting back, he bit his tongue and bottled everything up. It was easier that way. He didn't make any friends at school because he was always so quiet and kept to himself. He was cold and closed off. At that point, could you even consider him living? It didn't really matter. He was waiting to be reborn again. Because once he hit 16, he'd be saved. And that's exactly what happened.

The day he turned of age, Soohyun inherited all his grandmother left for him. He was rich and he was free. He left his father who was less than pleased by the transaction, but he couldn't do anything about it anymore. Soohyun decided to rebrand himself and his image. He changed to his western name, Soren, and completely flipped his life around. He moved to England where he bought himself an apartment where he could start fresh. By chance, he happened to run into a movie producer who immediately loved his "aura" as he put it and wanted him on a new movie project he was working on. That's where Soren Lee's life really took off.

Soren became a well-known and sought after actor in just a year. He was the hot new celebrity that everyone wanted their hands on. His discovery may have been by chance, but Soren truly was amazing at acting. Perhaps it was all those years of bottled up emotions that made him be able to channel whatever his character was feeling so well - either way, Soren blew people away. Unfortunately, being talented in that area and resented his whole life was the perfect concoction for a cockshit.

As part of Soren's new brand, he was a complete asshole. He was entitled, rude, and far too cocky. It was as if his terrible childhood had given him an excuse to treat everyone like shit. Soren still had no friends, though this time it was because he was the absolute worst. Even his co-actors got treated terribly. If it hadn't been for certain contracts, Soren's cast mates would've quit the projects. But they couldn't get rid of Soren. He might as well be invincible. With his popularity, he was untouchable. So he continued acting like a childish brat to this very day simply because he could. It doesn't seem like anything was going to change that. 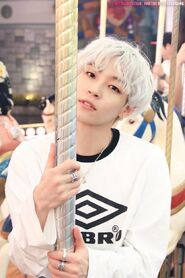 Add a photo to this gallery
Retrieved from "https://dumbledoresarmyroleplay.fandom.com/wiki/Soren_Lee?oldid=1089605"
Community content is available under CC-BY-SA unless otherwise noted.