Sterling Boone was born on May 19th, 2000 to Muggle-born parents. His first signs of magic (something involving a dinner fire?) occurred to their delight (and slight relief, being Muggle-borns they weren't entirely sure how that would go over) when he was around the age of six, and five years later Sterling was off to Hogwarts. He was sorted into Hufflepuff and was an excellent student. He kept his nose down for the most part, and didn't bother those around him. Following his student career, he took a job in an entry-level position for the Department of Magical Transportation.

Sterling moved around the Ministry quite a bit for the first years of his Ministry career. He worked for Accidents and Catastrophes, Magical Games and Sports and even did a brief stint in Law Enforcement. Eventually he settled into a position working for the Department of International Magical Cooperation. He worked under some of the higher-ups in the Department, commended for his work ethic and communication skills. He worked in this department much in the same way he did at Hogwarts--keeping his head down, and his to-do list short.

Sterling saw the writing on the wall when someone attempted to assassinate Minister Jeon. Even through the Tyrrell Administration, Sterling was on edge, sensing the growing public opinion of half-breeds... and by extension, those with Muggle parentage. Even though his parents had both attended Hogwarts, he knew his parentage would one day be called into question, and when Fitzgerald became Minister, Sterling took his leave.

He didn't exactly go underground, but his whole life he'd learned to blend in, and that's exactly what he did. He took a job in a pub, and quietly served those around him, listening for whispers of when this administration would come to an end. When it did, he wondered if it was time to return to the Ministry... and in what capacity. Friends around him jokingly suggested he should run for Minister.

Sterling has lived a life in the shadows, quietly, but effectively, supporting everyone around him. He's never needed the spotlight, and almost prefers to help those who are in it to do their best. His work ethic is something to be admired, and his to-do list is almost never very long. Part of his is due to his excellent communication skills. In certain stints in the Ministry, he worked as a speech writer, and he developed a love for writing. If you asked him, he'd tell you he was still honing the skill-- but if you read anything he wrote, you'd know the skill was already quite honed.

Sterling believes that people who are in positions of power should remember humility. Pompous people do not good leaders make. They should frequently thank those who work for them, and do their best to elevate the people doing the real work on the ground, not take credit for things that make them look good, especially when they haven't had any real part in it. 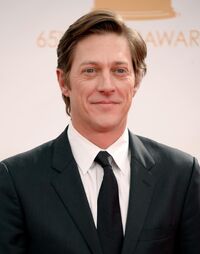 Sterling has an average build, not to tall and not too short. His face has more wrinkles these day than in his youth and his brown hair is beginning to show signs of gray. He dresses smartly, because he's found that he is taken more seriously when he's well dressed. He usually wears an easy smile on his face, unless he's highly focused on the task at hand. His faceclaim is Kevin Rahm.