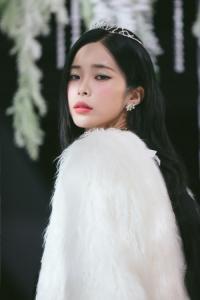 Syloon Seon is a courageous girl. Her soul cares for little creatures, and so her most favourite Hogwarts class is Magical Creatures. Despite being taught to always care for her clothes, being the result of being born into a fashion designer family, Syloon loves to play and she doesn't care a bit about her clothing when they get dirty (but she has a sense of style). She'll never give up on something she's started on. She likes to get her hands dirty and never misses out on a good Qudditch match. Syloon only likes to study for Magical Creatures though, so her grades are...um...not very good. She's mostly an average student.

Syloon doesn't have a high opinion of herself, but she does expect herself to be the best lazy version of herself. She enjoys the company of friends and loves to joke and make people laugh. Her favourite compliments are "She would make a good comedian when she grows up.." or "What a nice young lady you have there, Sakura.." Syloon takes them to heart and never brags. She's normally honest and humble, but when it comes to being stuck in a big pickle (Syloon, did you wrinkle my favourite evening gown..) she manages to bluff through her way (No mother, it's probably the house elf...). Syloon is never late on a single event, and is even sometimes too early. Nevertheless, Syloon, in summary, is a responsible young lady, who loves every single magical creature in the wizarding world.

Sakura Seon's great grandmother was the founder of a giant fashion-designer company. "Seon's Stylish Gowns and Dresses" shot to popularity in the 1900s, and eventually Sakura became the owner. Sakura was once a young Gryffindor who took after her mother's (Selene Seon) fashion style. Sakura was taught the ways of being a proper young lady, with a good sense of fashion, and she began to make her own clothing and adding them to her great-grandmother's clothing line. Sakura made her mother proud. After that, Sakura threw a party celebrating her great-grandmother's clothing line's anniversary and the success of her clothing. She invited almost everyone she knew who was a friend of hers in Hogwarts. However, she didn't know a sneaky Slytherin who not only loved her work, but liked her secretly from the start.

Sakura was greeted by a young Hufflepuff who claimed he was a friend of her best friend, and Sakura, being half-drunk already, accepted his bluff. This "young Hufflepuff" was Park Jae-hyuk. The Slytherin was famed for his Qudditch winnings and sometimes gross scandals. But Jae-hyuk's heart truly belonged to Sakura, and he believed that she had to like him too. Actually, Sakura did already like him, but he didn't know that. So he became a "Hufflepuff" and started to talk with Sakura. Sakura was amazed by this young man's storytelling skills-such qualities she never noticed a Hufflepuff had! At the end, Sakura asked him one question.

"Actually, you look familiar. I can't quite place the name, but if I'm not wrong, are you..possibly Park Jae-hyuk?"

Jae-hyuk, astonished that she actually remembered him, apologized for his act and confessed to Sakura about his feelings toward her. Sakura was surprised he liked her too-"What chance does a Slytherin have with a Gryffindor?"-and immediately accepted the offer of being his girlfriend. When they were both twenty-seven, they got married. After a few more years, since Sakura's mother didn't quite approve of her daughter hanging out with a Slytherin, they finally decided to have a child-partly because Seon's Stylish Gowns and Dresses" needed a new heir, partly because the couple wanted a family life.

On May 7th, 2024, Syloon Seon was born. Her "I don't care if my dress got dirty, okay" side came from her father, and her "Everyone needs fashion sense or it would be a fashion disaster" came from her mother. Syloon (called "Sy" or "Loon" by her friends) was very welcome in many parties and she had an obession of fashion models when she was small, because she would always sit on her father's lap while she saw her mother's designs being worn by beuatiful models from all over the world. Because of that, she's very talkative towards grown-ups as she grew up talking with models.

"Such an adorable little girl you have there, Sakura!" "Wow, how did you raise such a proper young lady with you in the household, Park?"

Syloon couldn't walk anywhere without being showered with these compliments. She didn't brag, though, and she kind of loved the attention sometimes too. She never had any other siblings as Sakura and Park became busy in Sakura's clothing business. Syloon loved her parents, even though sometimes they could be harsh. "I told you not to ruin that dress, Syloon!" "Syloon, we already had a little father-to-daughter talk. You can destroy your dresses, but you can't destroy your mother's things, okay?"

Syloon was expected to be a smart lady. Unfortunately, being a daughter of a Gryffindor and a Slytherin didn't make it easy.

Her first sign if magic was when she was six, when she made her mother’s dress fly. When she was seven, she accidentally knocked over a glass box full of her father’s Qudditch things, but then it fixed itself. Sakura and Park were both proud that Syloon would have her signs of magic so quickly, since their own ones came later.

So when Syloon's letter to Hogwarts came, Sakura teared up and Park couldn't bear the idea of parting with his daughter. "I swear, mother, I won't destroy the dresses, please don't cry.." "Dad, I will send you owls, just you wait, okay? I'll fill you in about the Qudditch matches.."

Syloon went to Hogwarts with a suitcase full of fashion designer clothes and a mind full of hopes.

Given [ Syloon Seon (she was going to be named Syloon Jae-hyuk but then Seon's Stylish Gowns and Dresses needed a heir) ]no meaning. apparently she's named after some sort of plastic producing factory, but she doesn't care (much).
Middle [ N/A ]N/A
Surname [ Seon ]Common surname in Korea.

Retrieved from "https://dumbledoresarmyroleplay.fandom.com/wiki/Syloon_Seon?oldid=1074812"
Community content is available under CC-BY-SA unless otherwise noted.