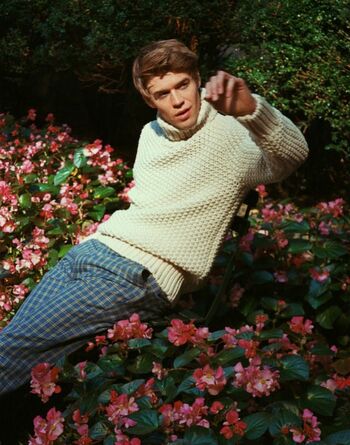 Lance is a strong-headed and kind boy who tries to do what is right and rarely pushes the boundaries or tries to break rules. He makes sure that he's in line with what is going on, and that's mostly from his father and being raised in a military household. Lance has a strong sense of good and a desire to help others, also because of how he was raised but also something he was born with.

Although this doesn't mean that Lance still isn't curious about the world around him, he likes to explore and figure things out and prides himself on his smarts. He thinks he's smart and believes that he's intelligent, and while he really is, because of his inferiority complex it's hard for him to truly believe it.

Lance always felt like he was leaving in his father's shadow and that he could never measure up to be like him. He felt like whenever his father was gone his mother would dump all the responsibilities on him, and whenever he wouldn't measure up he could feel her disappointment. Despite trying hard, it's developed inside him and keeps him from trying his best sometimes.

If push comes to shove then Lance will shove and defend himself, but he also will come to the aid and defense of others. He tries to help and be there, but he feels like whenever he does help people don't really want him to be there. Sometimes he feels like he reads a situation wrong or he's at the wrong place at the wrong time, and he doesn't have a 100% grasp on his emotions yet.

Despite being a good kid and having a big heart, he doesn't put up with crap and can fight. He can get pretty nasty when he wants to be, and has been known to be sarcastic to others. Lance doesn't like to feel weak or small, and even though he would never intentionally bully or put others down, sometimes he does it without realizing because he doesn't want to be weak or seen as unimportant.

Andreas Benjamin Derrick was born on April 29th, 2028 in a small Berlin hospital, located deep in the poorer section of the city to a young German witch and a muggle. However, right as his mother recovered from her exhausting labor of Andreas, she told the doctors that she did not want him and to take him away. Surprised, the doctors did as bade and took Andreas to a small orphanage near the hospital. He was a healthy little baby, not exactly full of energy like most children, but preferred to read and keep a watchful eye out on the other children.

When he turned one, his life turned upside down. An American couple entered the orphanage, immediately drawing all the children's attention. Andreas was curious and wandered closer, taking in the man dressed in a sharp uniform and a pretty woman on his arm, blonde hair and blue eyes bright as the two looked around. He couldn't think but there was possible hope that they would adopt, and quite possibility adopt him.

Seraphina Whiteford, the wife of American Army Lt. Colonel Michael Whiteford, was looking around the small brick orphanage that they were in, before she spotted a small boy peeking around the corner. With a gentle tap on her husband's arm, his attention was caught by his wife and she gently drew his attention to the little boy peering around the corner. Michael nodded, kneeling down into a crouch and gently calling the little boy over. Andreas slowly walked closer and soon found himself picked up and nestled into the man's arms. The Whitefords soon walked out of the building with their family one member larger.

They moved back to America not too long after Andreas' adoption was legalized, but they decided to change his name to something more... appropriate for their naming traditions. And so, Andreas Benjamin Derrick became Lance Justice Whiteford, the eldest child of Seraphina and General Michael Whiteford. He grew up, excelling in the strict and military-type household, and surprisingly acting like a perfect little boy. And a few days before Charles turned two, he received the news that his mother was pregnant, with twins this time.

On July 4th, 2029, Anna and Jeremy were born. The three-year-old was absolutely in love with his younger siblings, and before his parents knew it, he could be found as their shadow. As the kids grew, they got news of their father continuing to increase the amount of military thrown into their lives.

When Lance turned six he started martial arts training, keeping an eye on his siblings and helping his mother while his father was gone in the military. Lance idolized his father and every time he heard the stories it made him want to follow in his footsteps. Unfortunately both his parents did not want him to join the military, so he chose to become an auror when he grew old enough.

Lance was practicing his martial arts on a dummy outside when his first sign of magic appeared. He was 8 and his father had just left to be gone for 3 months. He was mostly practicing out of sadness and a little anger, and while his emotions were going wild he punched the dummy and it exploded. He was phased for only a moment before excitedly telling his mother what happened.

Hearing the stories of Ann-Sofie at Hogwarts also made him more excited to go, and as the time approached his eagerness grew. Though, the year he turned 11 and received his letter was mixed with joy and sadness. It was only a few months later that his dad was killed in combat, leaving the family without a father. Lance felt the immeasurable responsibility fall onto his shoulders, and because of it he hasn't been able to properly mourn his father's death.

Getting ready to go off to Hogwarts isn't as joyous as he wishes, seeing as he has to leave his mother and siblings behind while he goes off to get an education. He hopes he can make his mother proud by doing good in school, and wants her to be proud of him like she was proud of his father.

WIP
Add a photo to this gallery
Retrieved from "https://dumbledoresarmyroleplay.fandom.com/wiki/Template:Lance_Page?oldid=1097879"
Community content is available under CC-BY-SA unless otherwise noted.