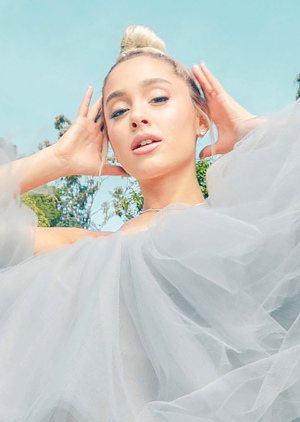 For a long time Tetyana was a very shy and reserved girl, not to the point where she was scared of her own shadow but just enough to keep to herself and her sister. For a long time Tetyana struggled to find herself, which may have been a big reason why she was so reserved. Growing up with an identical twin sister isn't easy, especially when you want to be unique to everyone around you. Lucky enough for Tetyana, she found herself through art and fashion. Using it as her form of self-expression, always pushing what she thought were boring fashion trends and learning different art forms. Her creativity made Tetyana blossom, and not long after she felt free and like a whole new person.

Tetyana nowadays is very in tune with herself and her emotions. She isn't afraid of meeting new people or communicating and she wears her heart on her sleeves. While she keeps some emotions kept under lock and key like anyone would, it isn't hard to pick up whether or not she's having a really good day or a really bad day. Everything she feels she channels into her creativity. Whether it be songwriting and singing, fashion, or drawing. However, some people take her openness when it comes to her emotions as a bad thing, especially when she's having a bad day as she tends to get quite sharp tongued with her words. While it isn't intentional, she does believe it's best to get those things out when she first feels them rather than bottling them up.

Tetyana is brutally honest and will call it like it is. While sometimes her opinions can be harsh, she wont care especially if you ask for it then try being offended. She calls people on their poor actions and doesn't let any ill will towards her go unpunished, revenge is a dish best served right away and with little time for recovery. That's not to say she's completely rude, in fact she's quite the opposite and she'd rather call friends out on their bull than let them go on thinking it's okay to do it again. This is very similar to her ideology as well, being an advocate and an ally for many things, Tetyana doesn't put up with ignorance whatsoever and will let you know when something you're doing is offensive.

The Dea twins weren't originally twins but rather triplets. For five months, Julius and Victoria Dea were under the belief that they would be raising three children. However, that wasn't the case when Victoria fell into labour. The third child should have been dead in seconds after being born, however the hospital was able to place her into an incubator, keeping her alive through artificial means. It wasn't a long lasting solution. She was the youngest, luckily, and both Caera and Tetyana had already been born when both Julius's and Victoria's life crashed down. They were told, after a month, that there was nothing they could do and the best choice was to unplug the child. However, the parent's decided to take matter's into their own hand. Julius was an inventor and a good one at that. He specialised in mechanics, electronics, and was soon building a metal heart. They were told that it was the heart, the heart wasn't supporting the child, so he could fix it by replacing it.

It worked. Briefly. After a few weeks, Julius was able to replace the heart with a man made one, allowing her to be alive without support. He worked at the hospital so it wasn't difficult getting access to her without supervision. For a few minutes, ten at most, the family was whole. They were even able to take a picture of all five, alive and well. However, after ten minutes, though, the babies heart began to falter, the body rejecting it, and this time...there really was nothing the parents could do to fix it. They were forced to face reality and in a week, they were burying their third child, making their triplets twins. Growing up, the parent's didn't tell either Caera or Tetyana the truth about their birth, didn't even tell them they had another sister. To them, it was just those two. For the next years, life was normal enough.

They grew up in Florence, Tuscany, in a small Italian community. Whilst the father worked at the hospital, their mother raised them on astrology and occultism. To them, they didn't know stories about cinderella, they knew the stories about constellations, such as Orion. It was a happy period and they were loved. Safe, loved and well fed. However, it became apparent that neither of the twins were...well, normal. They seemed to know what people were thinking, generally. Though the parent's weren't magical and didn't know, the girls had a natural talent for legilimency. They were able to read both each other's and other's thoughts, though they were not perfect. With each other, they were able to practise these methods and develop them further. At school, Caera kept to herself, save for her twin, and didn't really interact with the people around her. It was when she was eight that they picked up on their aptitude for legilimency. They really only used it on each other, though, using the other to get better. Of course, this changed when they were nine years old.

One of the twins had found a picture of both themselves and their dead sister. Naturally, the twin showed the other and soon they were confronting their parents. They received the truth. The dead sister, the attempts to bring her back. For both of them, it was soon, too much and the event sparked both their magical incidents. Caera caused one of the candles to fly off the table whereas Tetyana had spilt over a few bottles of various spirits. The mixture of the spilt alcohol and the candle hit it was enough to cause the house to be set on fire. Seeing as the girls were small, they were able to escape without barely any injuries. The parents, however, weren't so lucky. Both perished in the flames which left both girls parentless and homeless. Seeing as they were responsible for the deaths, they decided to run. Seeing as they lived in Florence it wasn't hard to think of someplace to hide. With the local gypsies, or the Roma's (the technical name), that had camps throughout Italy.

For the next two years, they lived in the camps. It wasn't pleasant and they were forced to petty crime to survive. Pickpocketing tourists, selling cheap trinkets on the side of the street. The native Italian's were hostile to them and were often pushed around by them. They lived in a little, tore down car in the camp, sleeping on the seats. It was all rusted and it was missing three of its doors but it was shelter. The camp was far too overcrowded to house the two of them safely. There was little to no privacy and the families with younger children were using the make shift huts. Seeing as neither of them had any connections, they struggled to find space for them, even getting access to some of the water bottles sent over by private companies (the camps didn't have access to fresh water or electricity) was difficult for them. They were able to go to school, though. Impoverished schools where children were mostly from impoverished families. However, they chose not too, just to stay out of the government's attention. However, they did find someone to teach them. An old man who use to be a teacher when he was younger. He taught them as much as he could over the two years.

They moved around a lot, moving from Florence to Naples, from camp to camp. This helped keep them hidden, especially from the magical governments. There were a few times where one of them had a magical incident. Caera wrote them off or ignored these small events. Seeing as they were raised religious, she often thought they were being possessed or haunted by the devil, paying for their death of their parents. This changed, however, when they were eleven. The Roma's had a large culture of pregnancy. It wasn't rare to find children as young as eleven pregnant or being married off and two girls, fatherless and without any ties, were obvious candidates. When they figured out what was happening, they escaped with a group travelling to Spain. For a few months, they moved through Europe on a small boat and lived there in Spain. However, it was here that they were finally found. They were sent off to Beauxbatons for their second year with the knowledge of the magical world. For Caera, at least, this relieved her. At least this meant she wasn't being haunted or punished.

For the next four years, they lived in the French school, learning how to control their magic and perfecting their abilities as a Legilment. Caera was taught that it was breaching people's privacy with her habit of reading anyone's mind. She wasn't particularly skilled at it, she could read some basic thoughts and images, but had to use the spells in order to broach further into someone's mind. She was particularly tuned to her sister and found it easier to read her mind than anyone else's. She was happy at this place. They had food, a stable home, a schedule, an education. She loved it. However, it didn't last long. Soon, their past caught up to them but...not in the way they expected. After the fire that killed their parents, the Italian government believed all four of them were dead. Until now. You see, they were secretly sitting on a fortune seeing as their parents had made a fortune throughout their lives (never underestimate a surgeon's pay check). They picked up on the girls' presence whilst they were in France and moved to interact with them, hoping to give them their inheritance. Seeing as the fire appeared to be an accident, the girl's were not going to be criminally charged. The girls' were relieved by this, especially now that they had a chance of a stable life (neither of them knew what they were going to do when they graduated). However, the event caused some of their peers to find out about their past. For the next few months, they were bullied ridiculously. For being Gypsies, orphans, murderers. Soon, one of them suggested: Hogwarts. By Sixth year, they had transferred, hoping to escape everything that had happened on mainland Europe. They moved to England, renting out a small apartment in Magical London to stay in whenever they weren't at Hogwarts. Hopefully, this place would do them better than previous places had done.

Retrieved from "https://dumbledoresarmyroleplay.fandom.com/wiki/Tetyana_Dea?oldid=1040402"
Community content is available under CC-BY-SA unless otherwise noted.