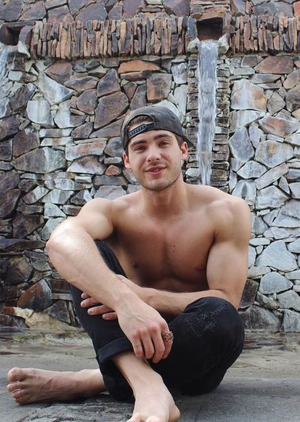 Teddy's personality largely corresponds with that of a typical, stereotyped jock; an obsession with sport, the constant need to workout, perhaps not the brightest in the common sense department and, well, slightly egotistical. Teddy can boast, in his defence, that his intelligence does succeed that of the stereotype but it is undeniable that he sometimes misses the most obvious of things. He is, however, a lot more mellow than the stereotypical jock. Sure he might love sports and working out but, besides that, he's a rather reserved individual. When he's with people he's comfortable around it's incredibly difficult to get him to shut up but, when he's on his own or meeting people for the first time, it's not unusual for him to be quieter and a lot more demure. Some people like to label him as 'sensitive' but he prefers the simple, nice. Teddy largely enjoys being the friend someone can have a laugh with, definitely not being opposed to taking on the role of a joker to ensure that those close to him are happy and enjoying themselves. Some have gone as far to say that, when Teddy puts his mind to it, he can brighten anyone's day and, thus far, he has yet to be proven wrong. In a similar vein, Teddy is an extremely empathetic person, especially to those he's closest to. Whilst it isn't the extreme of when they feel pain he feels it too, Teddy always does his best to understand why his friends are feeling a certain way and, based on it, will stop at no length to at least cheer them up slightly. Sometimes it works well in his favour but, other times, he can come off as a bit clingy as he tries to make people feel better. His humour ranges from innocent jokes that are old school and tired, to innuendos that range in humour and tastefulness and, finally, a sarcasm that he always has to follow up with a reassurance that whoever it was aimed at knows that it's a joke.

The most prominent aspect of the negative side of Teddy's personality is his stubbornness. If Teddy has something in his head that he wants to do - or doesn't want to - it's incredibly difficult to sway him and, more often than not, people give up on trying to get him to relent. It's typically described as a backbone of steel but, as he's gotten older, a lot of people would rather call Teddy frigid and boring. Likewise, there's an air of arrogance around Teddy. He's not incredibly arrogant but, prescribing to the jock stereotype, Teddy can be a little... insensitive when he talks about his own feats and can stroke the budding ego. If he's caught up on it then he feels bad but it can take a while for people to break the ice and tell him to shut up. Due to being incredibly trusting of people, Teddy takes misuse of his trust, lack of loyalty and dishonesty from his friends as fatal things. To him, being lied to and betrayed is among the worst things someone can do and, if anyone were to do it to him, he'd actively try to distance himself away from said person. In the same breath, due to this, he can be seen as incredibly overbearing with his trust and desire for people to uphold it similar to his standards - though, in recent years, he's tried to get better. Whenever he's sad or angry, Teddy will pour his emotions into working out. One can always tell when he's particularly peeved because a punching bag will be abused to no tomorrow. It's Teddy's way of cooling down; afterwards he is, most of the time, back to normal. If something continues to bother him even after an intense workout session, it's clear that Teddy truly does feel intense in that sphere of emotion.

Muggles Rufus Abberly and Johnson Bexley were as close to the textbook example of two people trying to figure out their sexualities as possible. Both of them, through confiding in each other as best friends, slowly came to the realisation that neither were, well, straight and, on top of that, both harboured a form of crush on the other. As people around them expected, their relationship was strong and, before long, the two were married and lived happily in a small cottage in the English countryside. Perhaps unfortunately for them, this would be the only part of their lives from that point on that would be predictable.

It was no secret the two wanted kids and, from saving up and using lifelong savings, the two were able to go through the process of having children together biologically. Paying that little extra, the two had twins and readily anticipated the birth of their children. The two spent countless hours converting their home into one that was toddler friendly and fit for twins. With nine months passing, Rufus and Johnson saw the delivery of their twin sons from an artificial womb, naming them Theodore and ????.

Theodore was always the calmer one out of the duo; he was rarely phased by anything as an infant and would quite happily latch onto either of his fathers and be handed around with little fuss. Such a demeanour earned him the nickname of 'the human doll' as he'd do little in terms of resistance when it came to being fussed over. He still could be trouble, mind, more so whenever Rufus or Johnson tried to discipline him whenever he did do something wrong. Still, Theodore was best described as lazy and calm, a baby that one could quite easily forget about in the best way but always go to for the best cuddles.

As he began to get older, attending muggle primary school, Theodore found himself falling in love with rugby with the sport eventually having an integral part in his life. From starting out in his local club's child-team to getting recognised further in a county-wide sense, it was clear that Theodore had found a sense of identity in rugby. Whilst sports were clearly his sphere of expertise and enjoyment, Thedore - by now nicknamed Teddy - also showed some prowess in maths and French. Combined, Rufus and Johnson were excited to see a promising future ahead of their son. Things... changed however when Teddy was seven-years-old. After having lost a game of rugby, Teddy fell into a strop - something rare for him but, in his defence, the losing of the game had been farcical and the anger was shared amongst the kids. In a fit of rage, Teddy caused a bag of rugby balls to implode, sending the balls flying in various directions. To say people were shocked - horrified - was an understatement, so much so that everyone was quick and happy to sweep it under the rug as if it didn't happen.

Naturally Rufus and Johnson had their curiosity piqued at the fact that Teddy was looking at the bag as it exploded but paid little to no attention to it; in their mind they imagined a scenario where it was all by chance and Teddy's imagination would grew exponentially as a result of it. A similar thing happened when Teddy's twin had a similar experience; neither parent took much notice and began prepping their sons for life at secondary school.

Then the unexpected happened. On their eleventh birthdays, Christmas Day, the two received letters from a 'Hogwarts School of Witchcraft and Wizardry.' Neither Rufus nor Johnson took it seriously; although they were muggles with the odd magical friend who was masquerading in their society, neither of them ever took said friends' words seriously and played it off as one of them playing a trick on them. It wasn't until the new year, when they asked said friends how they managed to coordinate it without being seen, were they informed that, no, the letters were very much real and that, yes, their sons were a part of the magical world. Things began to make sense, namely the twins' magical experiences. Rufus and Johnson, with Teddy's experience, were able to see the link between the extreme anger he felt and the way the bag of balls exploded seemingly on its own. With their plans for secondary schools now shuffled dramatically, the couple enlisted the help of their friends to prepare their sons for their lives at Hogwarts.

Since coming to Hogwarts, Teddy has been sorted into _____ and has thrived. He still takes up rugby whenever he can, the sport being deep within him, but he does have an affliction to Quidditch. An emerging competent offensive spell user, Teddy has his eyes set on multiple careers within the wizarding world with very little desire to return wholly to his old, muggle life.

Add a photo to this gallery
Retrieved from "https://dumbledoresarmyroleplay.fandom.com/wiki/Theodore_Abberly-Bexley?oldid=1074788"
Community content is available under CC-BY-SA unless otherwise noted.