Theodore Spencer @TheoClint Follows you Researcher at St. Mungo's. Also a dad. Not much more about me. United Kingdom Joined April 2039 329Following 749Followers

Theo is a kind person, laid back. What he wants most in the world is for everyone to have a chance at happiness. Well, not most. He wants to be able to help people more than that but he figures they're on the same level. Theo's a healer and his plan is to apply straight to St. Mungo's as soon as he graduates, though he's secretly contemplating going back to America to study. Part of him wants to become adept in muggle healing as well, becoming a doctor, a neurosurgeon to be specific. However, he doesn't want to be too far from his family and going to another continent without them slightly terrifies him. Like his siblings with technology and science, Theo contemplates the possibility of introducing muggle procedures into the wizarding society, believing his people could benefit from it and improve the healing community. Thus, Theo can be quite open minded, not having any prejudices against the world around him. His worst nightmare, however, is having someone die on him. He fears that if he becomes a healer, or a doctor, there will be a situation that he won't be able to save someone. This fear gives him excuses, or reasons, to not go down this path that he's already going down and often finds himself looking at other careers. However, Theo's a genius when it comes to this area and can tell you nearly everything, even though he's only seventeen. He can tell you how to heal burns, how to heal a broken bone, can even tell you where every single bone is and what they're called. To him, and everyone else, healing is the obvious career.

Open minded, Theo would never consider judging someone or turning someone away if they need his help. Though sometime's there are scenarios where he is unsure on how to react, he tries his best. With everything Theo is confronted with, he tries his best to work through it. This includes classes. He's been known to help tutor people, especially in potions, herbology, transfigurations and charms, free of charge and doesn't think twice about doing it, though he struggles in defence against the dark arts himself. Another thing he struggles with is technology. He's hopeless at it and is often known for breaking them in ways that shouldn't even be possible. As a consequence, Theo prefers to do things the old fashioned way. Writing notes by hand, sending owls instead of emails, or going to the theatre instead of a movie.

Socially, Theo is actually pretty good at it. Easy going, he prefers to sit back and let people take control and isn’t bothered if his own ideas are shut down. He’s a bit of a goofball, always trying to make the other person laugh. They do say laughter is the best medicine. He doesn’t mind the spotlight and can handle pressure, in fact he probably works better under pressure. However, Theo is trusting, naively so, and can often trust people even after they betray him. He struggles to not believe the best of someone. Theo also has an interest in muggle magic. Card tricks and optical illusions, always carrying a pack of cards with him. However, he’s a little absent minded, often forgetting small things because he’s so focussed on other things and people. As a consequence, he’s often forgetting his keys and phone.

Although you can technically define them as high school sweethearts, it wasn't sunshine and daisies the entire time. They met as first years, and experienced what they'd later try to claim was love at first sight. They crushed on each other for two years and a half, afraid to ruin the friendship they had. It wasn't until third year when Louis Spencer got his head out of his ass and asked Gwendolyn to be his girlfriend. It was a dramatic affair, really, because it was in the middle of a quidditch match, while he was defending her from the other team so she'd catch the snitch.

They only lasted a grand total of six months. It was an at school only kind of relationship, by any means toxic, and they both knew Louis wasn't going to be loyal for three months without actually seeing his girlfriend. Gwen didn't want to date someone who'd potentially cheat on her, and swiftly ended what they had going on. It took a total of one week for them to get over each other; Louis was a popular guy back home in Orlando. He could have anyone. And he did. That summer was a wild one; he ended up losing his virginity to an older chick, messed around with her cousin, and wound up hooking up with said cousin's brother.

It wasn't until seventh year that they got back together. Louis was a playboy - he'd won a reputation at Ilvermorny for sleeping with girls and tossing them aside. Until he met his match: Thunderbird beater Olivia Cobbold. She was a Hogwarts transfer in their year, and the only girl who outright rejected him. And Louis - well, Louis loved himself a good challenge, so he pursued her. It took him an entire year, but by the start of seventh, he'd managed to win her over and score a date. It didn't settle well with Gwendolyn. Sure, what they had was brief, and they'd grown apart after their nasty breakup, but she hadn't realized he'd ever settle down with anyone. Especially someone who wasn't her.

Gwendolyn was nothin if not intense. She confronted them after their first date, much to Olivia's humiliation and Louis' amusement. Could you really blame him? Here was his ex, going crazy over his date with another girl - a girl who had decided they'd ultimately be better off as friends. Although Gwen got what she wanted (Louis), that was an instance he never let her live down. Not when they moved in together fresh out of Ilvermorny, not when they signed on to play pro together, not when they got married, not when they had their children a year after.

Theo is the oldest of the younger generation of children, or the fifth oldest if you have to be specific. As a child, he was often the more quiet one, especially compared to his twin. As a child, he much rathered to be glued to the TV watching shows such as 'Planet Earth' than causing trouble for his parents and older siblings. He adored his family and adored holidays, especially Christmas and Easter, even though he figured out both Santa and the Easter bunny were scams at an incredibly young age. The presents, even simply being with his siblings, were enough that made holidays an exciting time of the year every time. It was during one of these events did Theo have his first magical incident. He was seven years old and set the Christmas tree on fire simply because one of his siblings had accidentally destroyed his play doctor kit. His parents told the police it was an accident, that they were lighting a candle but lit the tree instead.

By the time Theo was eight, he knew his love was with the sciences. At school, science was his favourite class and loved when they focussed more on biology. He was good at all the classes except PE and art. Theo was never a sporty or an artsy person and despised every hour he spent in those classrooms. He even flunked PE twice in a row. He was often picked on at school, nothing severe, but Theo struggled to make any friends in primary school and often got teased by his peers. As a consequence, Theo was often seen more with his head in a book rather than with other people, a habit he took straight to Ilvermorny. He was naturally sorted into Pukwudgie, something he had suspected since he learned of the houses.

He was a good student, getting top grades, and had a small group of friends. It was in Ilvermorny that Theo was dragged out of his shell. He had a kind heart and it helped him gain connections with people. Being the first child to go to school since his older siblings, he actually met expectations just not in the way teacher's expected of him. Theo was attracted to potions and herbology like a moth to a light. Theo was somewhat similar to Isaac, his older brother by three years. He was more in tune to the human body, wanting to know how it ticks, however Theo was more interested in healing the body, fixing people when they got hurt. Theo hates to think there are people out there hurting or having their lives inhibited or in danger when he can do something to help.

When he heard about the fire that his little brother had caused, he was devastated to hear about the person who was severely injured by it. Even though there was nothing he could do, he found himself sending gifts, such as chocolate, to the person and researching how to heal the specific injuries that the person had suffered. He spent years hanging around Ilvermorny's hospital wing and developed a good enough relationship with the patron there to find out what had happened. However, he found himself being dragged over to the UK due to their mother wanting to distance herself from her family and run her own business. 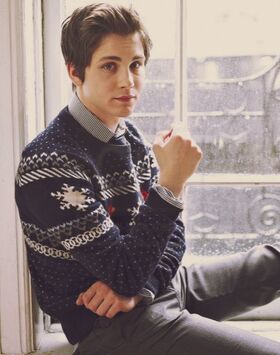 Retrieved from "https://dumbledoresarmyroleplay.fandom.com/wiki/Theodore_Spencer?oldid=1082569"
Community content is available under CC-BY-SA unless otherwise noted.