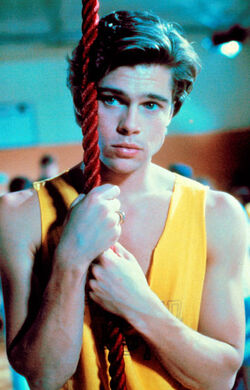 Thomas Frederick Hayden is an assistant at Weasleys' Wizard Wheezes, a receptionist at St. Mungo's Hospital, and a Gryffindor alumnus of Hogwarts School of Witchcraft and Wizardry.

When Thomas was younger, he had blond hair and gray eyes, and a very lanky, tall body for his age. Now, he has grown stocky and muscular, and of course he likes it very much. To complete his new look, he dyed his hair brown- until Brynja dared him to dye it back.

Thomas's father Adam was born in Australia. He was a spoiled only child with very wealthy parents. He was a foreign student at Hogwarts, where he was a Ravenclaw. He was very interested in politics from an early age and held the ambition to become a member of the International Confederation of Wizards. However, he met Eve at Hogwarts, who was a Hufflepuff. After they graduated, Adam and Eve got married and had 5 kids: Evan, Alex, Thomas, Emily, and Patricia.

Eve was a plain Hufflepuff who only ever wanted to be a wife and mother. The couple made the agreement to stay in Britain, though Adam wasn't happy about it. Because he was not a British citizen, it was very difficult for him to find work. When he lost his job, he demanded that the family go to live in Australia, where he was born. Eve refused to uproot the family, as Evan was due to go to Hogwarts the next year. The disagreement resulted in the divorce. As part of the custody agreement, Adam took the two oldest children, Evan and Alex, while Eve took the three youngest, Thomas, Emily, and Patricia. The father, Evan, and Alex left for Australia after Adam told Eve that he never wanted to see her or their younger children ever again.

Thomas was 7 years old when his parents divorced, and Emily and Patricia were 4 and 3 years old, and didn't quite understand what was going on. Used to being the middle child, Thomas now had to take over as the oldest. His younger sisters relied on him and were heartbroken when Thomas left for Hogwarts. Thomas's mother struggles to keep a steady job, making the family relatively poor. Thomas plans on getting a job as soon as he's old enough to help out. He remembers his father, brother, and sister relatively clearly, and hopes to find them one day. His early life was spent helping his mother and sisters, with little play or happiness after his father left.

Thomas is a very honest and responsible person. He is a jock who tries to make everything amusing. Sometimes this can be seen as immature, but he is only trying to lighten the mood, especially after the extra responsibilities at home he had to take on so suddenly. He is happier being around other people than alone. He is extremely protective of his family, especially his little sisters, and has punched a few kids in the face for insulting his family. He keeps very calm under stress, which he learned quickly by looking after his sisters. He is generally unlucky, from winning games to life's circumstances. He doesn't keep his problems to himself as much as refuse to think about them for as long as possible. He is an average student and cares more about the Quidditch field than the class material, though he does excel at Charms. Thomas isn't sure what he would like to do after he leaves Hogwarts, but he figures he has plenty of time to work it out. Thomas is also addicted to Acid Pops, and he's a superb guitar player and song writer.

Thomas is an ENFP, according to the Myers-Briggs Personality Test. In Cattell's 16 Factors, he has high liveliness and warmth, and low paranoia, independence, introversion, perfectionism, and tension. In the True Colors Personality Test, he is an Orange, with his secondary personality being Blue.

Thomas's wand is cedar, 11", with a unicorn hair core.

Carriers of the cedar wood wand are usually loyal, and have strength of character. They carry the potential to be a frightening adversary, which often comes as a shock to those who have thoughtlessly challenged them.

Unicorn hair is one of the gentlest and most adaptive types of wand cores. 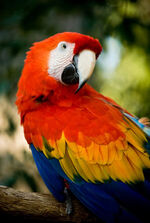 Instead of an owl, Thomas owns a macaw parrot named Jerry, the only gift he remembers from his father.

Thomas hopes to be chosen as Chaser on the Gryffindor Quidditch team.

This character has graduated Hogwarts and has journeyed on into the World of Wizarding. You may see them around, but they are no longer a student in Hogwarts School of Witchcraft and Wizardry.
Retrieved from "https://dumbledoresarmyroleplay.fandom.com/wiki/Thomas_Hayden?oldid=480937"
Community content is available under CC-BY-SA unless otherwise noted.