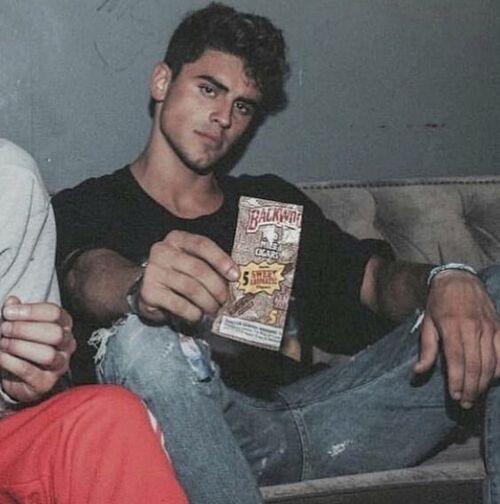 Tristan isn't good with people. He isn't good with friendship and finds himself untrusting and wary of the people around him. Isolated from everyone but his family, Tristan finds himself terrified of the outside world and is terrified of being hurt by someone that he loves. Tristan, though, is a family man and it's really with them that he feels truly comfortable and himself. Of course, he's not that honest with them. He keeps his feelings to himself. Tristan's made this little fantasy world up for them. That he has friends, that he's happy. Tristan doesn't like the idea of other people being worried for him. Tristan doesn't want to feel like a burden, so he shoves a smile onto his face for everyone to see. Is he depressed? You could say that. Tristan would explain himself to be a shell. An empty shell with a pretty smile. Was he always like this? No. He was a happy and wild as a child, always getting into mischief and arguments but this fizzled out as he grew older.

Tristan isn't good with people. He isn't use to speaking with them. Tristan can often come across as rude and surly. Distant, Tristan struggles to socialise with those around him and struggles to put himself out there. Tristan believes he would just make a fool of himself and be judged the moment he does. Of course, it doesn't help that Tristan has little to no idea who he is. Tristan is still in the process of finding out who he is, what he likes, who he likes. Though a gay man, Tristan still hasn't come to that conclusion quite yet. He knows something isn't right. He felt it when he was with his ex girlfriend but he couldn't figure out why he didn't feel right (save for obvious reasons). Tristan just needs that little boost of confidence to put himself out there, to experiment with everything and anyone, accept that he's going to get hurt here and there, and Tristan's life, and his outlook on it, might increase. Just a little bit.

Tristan is good with people. There is another side of Tristan that not many people see save for his family. Reliable, honest and protective. Tristan is a down to Earth sort of guy that people can lean on when they need help. Tristan is the definition of a protective older brother and doesn't hesitate to step in if he believes those he cares about is in trouble. If his name started with 's' and not 't' he probably would have gotten the nickname 'safety s–'. Tristan isn't a reckless person and always make sure he and the people around him will be safe before involving them in an activity. Though he likes sports and he often partakes in it for the sake of his fitness, Tristan is wary of how dangerous it can be and how many people can get hurt. Tristan can also be quite witty and has a sly remark to when he wants to be. Tristan isn't a bad person. Insecure, scared and quiet? Yes, but isn't bad. Tristan does want to do good in the world but he's not quite sure what. He doesn't even have a hobby, which he's working on. In his free time, Tristan is jumping from hobby to hobby to try and find something that he likes. Right now it's poetry, though he's rather terrible with it.

Tristan was the oldest of the Edison children and the only one worth knowing (not really but he'll say this to tease his younger siblings). His parents, Lucienne and Arthur, had met during their time in Hogwarts. His father had struggled to complete his seventh year and Lucienne was nice enough to tutor him. Tristan supposed he's very lucky his mother was nice enough and that his father was terrible at school or else he wouldn't be alive. He was born just after their engagement started–literally, Lucienne was pregnant when Arthur popped the question. Four years later, they finally tied the knot with Tristan being both the flower boy and the ring bearer, however that worked out. A tiny little boy in a salmon coloured three piece suit? They are still Tristan's favourite childhood photos (they were much better than the photos of him covered in mud).

When Tristan was six years old, they went to France for a vacation. Tristan was excited because of Disneyland, which he insisted on visiting. As it turned out, they never went but Tristan did find himself with an annoying brat of a sister. Thea was a little French orphan that they'd stumble upon and eventually she was being taken home with them to England. Tristan, in short, didn't like Thea. He found her annoying and was aloof to her. He made fun of her accent. He made fun of how she didn't know much English. Of course, he was young and didn't know any better. The amount of times he was reprimanded for practically bullying her was amazing. However, when he was eight years old, he finally had his first magical incident. They were driving in the car, listening to a song that Tristan hated and in the midst of an argument with Thea, he caused the song to change a few times until it was on something that he liked.

At primary school, Tristan was well liked. He had a small group of friends and was heavily involved in sport. He dragged his family to his sport events over the years. Eventually, Tristan had gotten use to Thea. In regards to Gideon, he was almost indifferent. But by nine, he'd grown past any reservations he had towards his siblings and treated them like family. Sure, maybe he had even adopted the big, protective brother role towards his siblings. By eight years old, Tristan found himself constantly in detentions and in trouble with the teachers because of how he constantly got into fights with everyone. Tristan perpetually thought he was in the right and kind of resorted to his fist. When he was eleven, he was sent to Hogwarts. Tristan, surprisingly, acted terribly when he got the acceptance letter and had torn it into pieces the moment he got it. Of course, he received ten more letters afterwards. Tristan found himself not willing to be separated from his family and dreaded leaving for the school. Tristan had to be shoved into that train when the time came.

Tristan didn't like Hogwarts. He struggled to fit in and struggled to exceed in classes. In fact, he was rather miserable and this feeling didn't waver until his fourth year. No matter how hard he tried, Tristan couldn't seem to connect with anyone save for his younger sister who was in the year below him. But he couldn't be with her all the time. Tristan owled home regularly and his letters from his parents became the only thing he was looking forward too. During his fourth year, Tristan dived into a relationship with a girl named Diane. He did it because it was the first time someone paid attention to him, made him feel good about himself. However, a few months into it, it became obvious that it wasn't a healthy relationship. So desperate for love, Tristan grew attached to a manipulative and abusive girlfriend and it took him a year to finally seperate himself from her. By the end of it, she had done more damage than good and Tristan was now untrusting and terrified of falling in love. Tristan supposed he was lucky that their relationship ended (Tristan would like to say he got the balls to break up with her but she just moved away to America), before his younger sister came back after her exile to Salem. God knows he didn't want to explain the relationship that exiled him even more.

Retrieved from "https://dumbledoresarmyroleplay.fandom.com/wiki/Tristan_Edison?oldid=1047695"
Community content is available under CC-BY-SA unless otherwise noted.