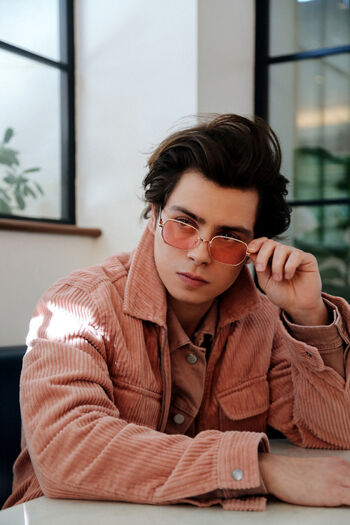 Troy is a quiet child, much preferring to cause less of a fuss than anything else and would rather stick to the shadows if it means avoiding trouble. Whenever someone gives him an order, or tells him what to do, he'd do it just for the simple fact he doesn't want to cause an argument. Incredibly humble, he struggles to take credit for anything he does. In all reality, he knows his siblings will most likely be more successful than he will be. He's not bitter about it. Not at all. In fact, he'd be proud of them but for Troy, he'd much rather happiness over success. When he's older, he kind of wants to create his own business, maybe an architecture firm, but would rather it stay local and small than anything else. He's good with maths though and relatively good with school. He tries his best, sometimes he won't do too well in a test but that's okay, he knows there's always room for improvement and that there's a next time.

He isn't athletic, though, and hates being on a broom, despite his father's expectations of him. Even though he still does it because his father's wrath terrifies him, he'd much rather hide away in his room playing video games. He always has a rubix cube on him, it helps him calm his nerves and gives him something to do. He has a small collection of these devices, detouring away from the standard multi coloured one as well. Not only this, but he constantly wears his beanie. A dark green woollen one. Even with uniform. He's not sure where he got it, it was probably a hand me down from one of his brothers but he never goes anywhere without it. He's a highly sentimental person and doesn't like change. He does have a list of fears, though it's not too long. The dark is one of them but Tegen, his sister, is also another point on that list.

When it comes to his family, he loves his mother. Adores her. However, when it comes to his father, he's not sure. He's terrified of him, terrified of his anger and has heard rumours about the type of person he is. He's aware there's a chance his father cheated on his mother but finds himself hesitant in believing them. Why would anyone cheat on someone like his mother? He tries to believe the best in people and is adamant that the rumours about Alistair cheating is just that: rumours. He tries to believe the best in people, though he understands people are flawed. Even then, he doesn't have too high expectations of people and is understanding when a mistake has happened. Though there are lines for Troy and he isn't the type of person to forgive everything. He is perpetually polite, though, and doesn't understand how people could be cruel or petty, though he struggles with having a lisp.

He is still a kid though and he doesn't really want to grow older. His sleeping schedule is ridiculous and Troy is quite willing to sleep through the day if he could. He's also quite inquisitive and is constantly experimenting with things, especially food. Troy is the type of person to mix soda together (though he doesn't like soda, the fizziness puts him off) which carries onto food. He'll eat anything and everything. This curiosity carries onto other people. Unlike his father, Troy isn't prejudiced and is always willing to learn more about people, especially those that aren't similar to him. He believes exposure is necessary to everyone in the world as it leaves to a happier one. Of course, he gets this opinion off the internet and other people. He never voices this around his father. Furthermore, Troy hasn't outgrown his Disney phase and is stubborn in that he only watches movies and TV shows originated from that company. Lion king and Brave is his favourites. Peter pan is a close second.

Another side to Troy is one that he doesn't let other people see is his curiosity with gender. He knows he's not transgender, though there are times he questions himself, and honestly? He's twelve. He's researched enough to know people younger than him are positive on their gender and he finds himself unable to relate, though he knows that gender is fluid and that it could change. Troy simply wants to break the roles assigned to each gender. In secret, as his father has proved he doesn't approve of it, he's teaching himself how to do makeup through youtube videos and knows he can rock a skirt better than most of the girls in his year level. Another area that he's teaching himself is language. He knows English and Spanish, for obvious reasons, but he's trying to teach himself Japanese and is failing miserably.

Alistair and Carmen Fitzgerald Lascano married not out of love but out of business benefits. It was arranged. Alistair was the CEO of Lumos Broadcasting Network whilst Carmen was the CEO of Nox Records. It made sense, didn't it? Of course, though it was arranged, it was successful to a degree. They did love each other and brought seven children into the world throughout the next decade. They were a heavily successful couple, especially in the wizarding world, and throughout the years, they worked to increase their pull, especially Alistair. However, as much Alistair loved his wife, he couldn't keep himself faithful. Throughout the years, he had affair after affair. Actresses, models, assistants, he wasn't picky. Naturally, this resulted in other children, all of whom Alistair kept silent.

Troy was one of the twins, the fourth pregnancy, the oldest by nearly a minute. His father named him and Troy was the only one who Alistair had a hand in naming. He was named after the mighty city of Troy. Which some people might find ironic considering the city's demise. Still, Troy supposed the meaning behind it was there. He was a quiet child, rarely making a fuss, barely even cried, and it was a trait that stuck as he grew into a toddler. Though, that isn't to say he wasn't a sweet child. He loved the people around them and constantly followed his mother and siblings around. His father? Barely saw him except as a figurehead or a presence at the dinner table. As he grew up, he was the type of child to be seen splitting his food into little bits and going around giving pieces of it to people. When it came to his siblings, he tried to get along with them. He was the type of brother to copy everything his older siblings do because he thought they were cool. It didn't take long for Troy to figure out to stay away from Tegen, though, which was something that he never really stopped doing.

Of course, he wasn't blind to the constant presence of lawyers. As a child, and still to the present day, he wasn't privilege to know what they were for. In reality, they were there when someone accused his father of sexual assault. Or a mistress was threatening to go public with Alistair's baby. He hated them though, found himself hiding in his room whenever they made an appearance. Of course, growing older, his father became more active in his life. As much as Alistair was willing. Troy does have memories of sitting on his father's lap during some event or another. When he was seven, his father told him he was going to be the athletic one of the family. When he was eight, he had been on a broom for a few hours each day, a couple of other hours watching or playing baseball. He hated it. He threw tantrum after tantrum, begging his mother to let him to quit. It was here that he had his first magical incident. He tried to break his broom. Eight year old Troy had broken into the gardener's shed and stole a hatchet. For three hours, or until he was found by a maid, he tried to saw the broom in half. Unfortunately, every time he did, his magic mended it back together. Suppose his subconscious knew how much trouble Troy would get into if his father found out.

Of course, there was one incident that truly got him into trouble with his father. Alistair found Troy painting his nails. Troy didn't think much of it, he was nine. He knew the practise was technically meant for girls but he was bored and he wanted to see how he looked. So he did them. Did a terrible job of it, of course, half the paint was on his skin, but that didn't matter to his father. He spent hours getting yelled at. Told that not one of Alistair's children will become a 'tranny', though Troy had no idea what that even meant. It was only until he went to Hogwarts did he understand what his father called him. Afterwards, he didn't really do anything on that line, except once or twice, but he made sure it was in secret and no one would find out. He did find himself liking video games and rathered playing them than playing sport, even though his father complained and complained about it. He collected both modern and olden day devices. He has playstations, X-box, Nintendo DS and 3DS, gamecubes, nintendo 64. Anything he could get his hands on.

When he was eleven, he finally was sent to Hogwarts. A miracle. His family had actually thought he was a squib considering his only magical incident was kept a secret by Troy. His father was very proud of him. Something Troy hated himself for being pleased about. It was a miracle event for both himself and his family. Sorted into Hufflepuff, he immersed himself into the school as best he could. Of course, his name brought attention to him, for being the offspring of both Alistair Fitzgerald and Carmen Lascano. He didn't really pay much mind to it. For the first year, he tried to get to know people, tried to become friends but he found himself preferring to play super Mario on one of his handheld devices. He hated flying and was glad he didn't have to do it in his upcoming year. Of course, that didn't stop his father from suggesting trying out for the Quidditch team.

Retrieved from "https://dumbledoresarmyroleplay.fandom.com/wiki/Troy_Fitzgerald_Lascano?oldid=1071731"
Community content is available under CC-BY-SA unless otherwise noted.