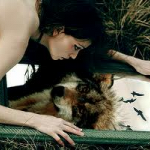 Don't be sorry for him he tried to eat Brandon. I suppose I could, but I am working on something right now. Can you save Kimberly for me? Frejah

Is Bastet and Homer going to have a reception for their wedding? Because I already fixed the names at Reception Hall just in case. Also, if you want me to archive the wedding already, I can, just tell me if you want me to. LittleRedCrazyHood

I knew he was going to die but in the end it was still hard xD.

To be very very frank and honest with you. Bastet is ALWAYS cryings ove death. She really needs to stop crying. Maybe she should go to an emotional specialist becuase she might be depressed. Algamicagrat 00:09, August 13, 2012 (UTC)

You may leave your characters in the year they are if you wish. As for Moxielia, we'll get to a trial, and then maybe she can come back to Hogwarts, depending on the verdict. Bond_em7 (Owl Me) 14:59, August 13, 2012 (UTC)

Don't create a new page for every category about Bastet. Put them on her regular page and just use headings. Only create subpages if it is separate. Eievie (talk) 21:06, August 13, 2012 (UTC)

I was talking about Athena. She shouldn't be an Animagus. Bryans1008

She's Overpowered (or "OP") you should pick Half-Veela or Animagus. Bryans1008

Sorry about the spell confusion. My fault. It also got me kind of flustered so I told Athena she was done without giving a theory question. If you could get her to finish the exam that would be great. Sorry --~Peislandgal (talk) 20:42, August 16, 2012 (UTC)

I am writing history for Jasmin. What do they do when they are in Egypt? They should work as Curse-Breakers bringing back treasure and gold for Gringott's. Belle Linda 05:58, August 17, 2012 (UTC)

The mom should be Librarian/Activist (for animals mostly the Phoenix) dad should be Wizarding Naturalist/Curse-Breaker. (I want to make the oldest brother Jaya too) You should just pretend that the other siblings West, Jacob and Alex exist and are Curse Breakers too. Kira is making Kimberly? and Freja is making Cleopatra? (I am not sure I don't know). I am confused you say Bastet is special witch? She and Cleopatra should be twin sisters. Their parents thought that Cleo was special so they name her Cleopatra but it is really Bastet. Belle Linda 13:18, August 17, 2012 (UTC)

Librarian/Animal Activist (her favorite is the Phoenix) Yes, Freja is making Kimberly, I couldn't remember which Cleo or Kim. ^_^ Belle Linda 13:34, August 17, 2012 (UTC)

Sure! I'd love to RP Osiris! What happened to Lissy? LittleRedCrazyHood

RP with Jasmine anytime (except when she is working) just post and maybe owl me if I am not on so I know. Belle Linda

Yes, Lupa, either Bastet or Desiree can be the only Animagi Trainer in the Ministry. The other one needs to chose a different job, also at the Ministry. Alex

The only change needed, Lupa, is for one character, Desiree or Bastet, to ask for a different job in the Ministry, which Einar will find her. I'm not looking to change the characters in any other way. If Bastet and Desiree are both animagi, that's fine. Alex

Why have Bastet ask where they were if they are at her house? Is Lily still making Alex or one of the brothers? Does Bastet not live with Homer and the babies in the same house? Belle Linda 12:59, August 20, 2012 (UTC)

Please don't edit my talk page. Just add a new section or leave a new message under the last, the one at the bottom. It gets really confusing for me when you edit an older section (Even if it is one you created). I didn't understand when you said *They* after asking about the rest of the family, but I get it now you meant the twins, Isn't it just Nut? Not Nuts with the s at the end?

Please note, your character, Moxielia, is related to the Lestrang Family and this will need to be fixed by August 23rd, 2012 if you want to continue editing on the Dumbledore's Army Role-Play Wiki. Please note this is your last warning, your next offense you will be blocked infinitely.

I hope someone adopted Misty Hales or foster her, if not they dont adopted her, then we should get rid of her page, because i dont want to roleplay with her anymoreI love the Cats, and Wolves (talk) 22:59, August 22, 2012 (UTC)

You are now an inmate in Azkaban Prison.

You have been blocked indefinitely for {{{1}}}. Thank You for your time here on Dumbledore's Army Role-Play Wiki, we hope you enjoyed yourself. If you disagree with this block, you must contact an admin through another wikia.

During your time on the DA wiki, you have broken the following policies on numerous occassions: spam, disruption, godmodding, bunnying, metagaming, character limit, character abilities, character adoption, and the blog policy.

These abundant breaches of policy have resulted in 7 warnings, a 2-week ban, and a 1-month chat ban. Permanent action is now required. You are hereby banned infinitely from the DA wiki.

I have been thinking a little about Lupa's ban. I don't disagree with it, but I was wondering if she could maybe 1 more chance? Like probation? She could choose 1 old character of hers. That character could not be a Metamorphmagus or part-anything. Then, after a week or a month or whatever time you chose, if she follows the rules and keeps her character’s page up and role-plays reasonably and stuff, she may stay for another month or so? -Eievie (talk) 18:40, October 3, 2012 (UTC)

I vaguely remember once she was banned for a few days, maybe a week, in the height or her character creation and deletion. I'd forgotten. Eievie (talk) 18:52, October 3, 2012 (UTC)

But that was a long time ago. Now, after being really banned and with probation rules, I think she'd take it more seriously.Eievie (talk) 19:00, October 3, 2012 (UTC)

I don't know. Lupa has been given multiple warnings, she hasn't ever taken it seriously. Though, if it was possible to give her another chance, who exactly would watch over her? Would she have a kind of... probation officer? ~Lissy~ I do What I want, When I want, Where I want. ...As long as my parents say it's okay... 21:01, October 3, 2012 (UTC)

Please continue this conservation here. All rollbacks, admins and Bcrats may vote. I have made a Vote, I am not saying I have voted yes yet.

Retrieved from "https://dumbledoresarmyroleplay.fandom.com/wiki/User_talk:Daughter_of_Lupa?oldid=131018"
Community content is available under CC-BY-SA unless otherwise noted.