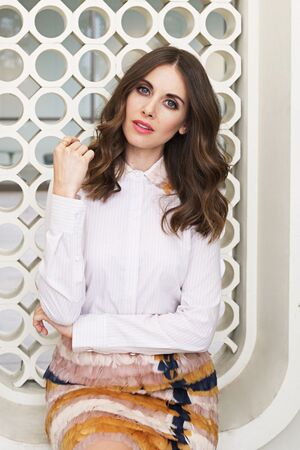 Since her scrape with death to Scrofungulus, Lena has let herself become a lot more free (and perhaps a little less studious, as such). If Scrofungulus couldn't kill her, then several of the risks she could take might not either, like applying for Quidditch Captain and taking up beating. Although she can still be a little judgemental of people, and dominantly uses her head over her heart in most situations, she's definitely loosened up a bit and realised life is worth living to the fullest. Spending a lot of time around her Gryffindor now-wife, Malia Sakellarios-Willow, especially so before and after the scrofungulus and regretting the short time they were broken up, might have something to do with that.

As well as the possibility of terminal cancer like Yevgeniya and Ruslan had. They had shorter lives than Lena did and does, so she has to embrace it. Below the surface, there's a lot of survivor's guilt. Both from her siblings' and the scrofungulus patients' deaths. Sometimes she has dark days where she's too introverted to leave the dorms. Below the surface she's still not happy with herself and who she turned out to be. Her disappearance has only exacerbated these feelings. How could a woman justifiably survive so much?

Valentina Willow is the eighth of seventeen children to Anzhelika and Zebunon (although she doesn’t recognise the former), and one of the fifteen alive at the present day. Naturally, right from birth it was a chaotic household, and one with so many children was not blessed with innate wealth despite being rich - although she was gifted with being Zebunon’s personal favourite after a short while, which probably did give her a slight advantage over some of the others in terms of parental favourite. At three years old her hometown of Zheleznodorozhny was merged into the city of Balashikha, but Lena still prefers to say she was born in Zheleznodorozhny. Most of her childhood memories are either with Kea, Mstislav and Abito, her older siblings, who have since returned to Russia - or with her younger siblings Ruslan and Yevgeniya, now deceased. So, this has left her with little sentimental memories of home, the lack of these only accelerated by the less than favourable reaction of Anzhelika to her relationship with Malia Sakellarios. However, she still loves her father dearly, and is appreciating his offer of assisting her in moving to England rather than returning home to Russia - it’s because she loves him that she wants to take her burden off of his back, and give her mother less to complain about. Zebunon’s acceptance of her sexuality came as a pleasant surprise to Lena, because she’d never heard his reaction to the coming out of her older brother Slava (Mstislav).

Her siblings were unusually named, or at least the seven prior to Lena were, after the seventeen names of Lilith. That was one of many curses Lena believes Anzhelika lay on her children aside from her attitude, and Lena is sure that were it not for Zebunon she would be finding herself disowned. She grew up unawares of most of her cousins, which was true of most of the Willow family, and even the youngest of those, Lirael, being far too much older than her to facilitate a truly close relationship. As such, they remained mostly distant except from the occasional visit, which only led to wonderful exploration of cousin Lucian’s success in gaining the Willow Mansion and not really talking to the cousins at all.

Lena, as her sister Ita hadn’t before her, showed her first sign of magic at the age of five. This led to some degree of sourness in their relationship despite their closeness in age - Ita was a Squib, and that had not been a good thing to find out. In Ita’s words, ‘of course Daddy’s little girl is magical and special.’ Despite this utter lack of a bond Ita still features as the first obstacle in Lena’s boggart, something that perplexes the Ravenclaw to this day. The sign of magic was quite explosive, so the Willow parents were surely glad it had happened outside and caused little injury. The older Willow siblings had a soft spot for the game of Quodpot, which they’d somehow managed to drag their competitive sister into. Refusing to accept a goal, an outburst of magic forced it to explode when it shouldn’t have due to the counter-solution, attributed to her due to the look on her face.

After that particular fiasco Lena eventually chose to return to her academic pursuits including learning how to fly properly, reading and such like which led to her placement in Ravenclaw. She discovered her talent for the beating position when they reluctantly went back to the more popular European game Quidditch, first trying it out with slowed-down bludgers at seven years old. She once hit Mstislav on the head which very nearly knocked him out (he did get a concussion) just prior to her eleventh birthday, by which point she was already reading fervently and trying to visit England to grow accustomed to the language and culture. When she arrived on King’s Cross, she met a girl, Malia Sakellarios - nowadays, she believes it was fate that she met Malia, her own little fairytale ‘crush at first sight’, perhaps her first brief ‘you’re bi, Lena!’ alarm bells.

Shortly after, she met her closest non-romantic friend, Owen Connor, who was to be her closest friend, housemate and beating partner. She was the first to figure out his lycanthropy, but said little about it, unlike the talkative Miriam Hayes who just couldn’t keep her mouth shut about the werewolf in the castle. On many occasions she defended him in the absence of his best friend Lisbeth Ostberg, and respected him despite his condition. Lena is the first and only person to see Owen in his wolf form, in an instance during their fifth year - she is lucky he took the Potion, and she knows it.

Christmas of third year was one of the best days of her life, when she got together with Malia Sakellarios, her crush. This lasted for a year prior to a period of breakup in fourth year when they were both hitting rock-bottom, coming to its climax in Owen pulling Lena back from the Viaduct in a mix of feelings over the deaths of her siblings Ruslan and Yevgeniya, and her breakup with Malia. Soon enough, they were back together to be separated again by a terrible bout of Scrofungulus which left Lena vulnerable, hospitalised and near death with no visitors allowed. After this, they grew closer. Lena got Quidditch Captain in her fifth year, as did Malia, resulting in a competitiveness between the pair - Gryffindor beat Ravenclaw, but Lena’s side were still victorious in winning the cup. Their summers seem to be bouted by misfortune as Malia disappeared for the final two weeks, leaving Lena and Malia’s brother Achilles worried. The two girls believed it was a kidnapping, but there are so many holes to fill they aren’t sure - so they distracted themselves with plans for a roadtrip this oncoming summer as they will be of age.

Lena was of course slightly miffed not to get Head Girl. But her following year was the most awesome when Malia proposed to her on a roadtrip. They kept it secret over that summer. Then, at Christmas, Lena was invited on a holiday with the Sakellarios family. She has a horrible feeling that their magic caused the plane to malfuction, and Lena, Chloe, and Malia got out of it alive. She's managed to keep Malia's spirits mostly high, after that, she hopes - she knows what it's like to lose family, and it's her second near-death experience in a short time.

Eventually, Lena and Malia married, and across the course of their years together, they had several children — until several years ago, Lena was caught out on an undercover mission as an Auror. She has spent the last years doing what was necessary to make them trust her, so that she could get out and see her family again — and she knows that Malia, that everyone will by now presume her dead because there was no way of making contact. And even if life doesn't go back to the way it was before, even if she and Malia never marry officially again, she'll get to see them. Which, in itself, is enough for her if that's what Malia wants.

WIP
Add a photo to this gallery
Retrieved from "https://dumbledoresarmyroleplay.fandom.com/wiki/Valentina_Sakellarios-Willow?oldid=1025062"
Community content is available under CC-BY-SA unless otherwise noted.