Victoria, or 'Vic', though sometimes referred to as 'Vika' (Pronounced Vee-ka), but only to her close friends, was born on April 19th to her parents, Ashley Faye (nee Haywood) and Hayden Faye. Ashley was a Ravenclaw, and Hayden was a Slytherin. While Hayden was a pure-blood, Ashley was a half-blood, and the Faye Pure-Blood line ended when he married her, though he didn't care, against tradition, he chose his wife over centuries of tradition. Victoria's bias to Hufflepuffs came from her mother, surprisingly, instead of her father. Her mother had a estranged relation with her own mother, who was a famous potion maker. Their relationship collapsed so much that when Ashley married Hayden in Paris, where she'd grown up, they both agreed to move to England. Ashley hasn't seen her mother since the wedding.

Victoria's magical abilities first manifested when she was around seven years old,while her parents were hosting a party with other wizarding families in the area, Half and Pure blood alike. She'd been raised at home, not going to a muggle school, as her parents agreed it wasn't for the best. One of her most defining memories occurred when her father took her to Wigmore Hall in London when she was eight, where she discovered her adoration of music, particularly classical. For her Christmas present that year, she received an MP3, to the annoyance of her mother, who hoped her father would've gotten her something more up to date, though her mother didn't blame him, he was a pure-blood after all. In any case, Victoria has cherished the device since that day.

Victoria always knew she'd go to Hogwarts, as her mother didn't want any chance of her meeting her grandmother if she went to Beauxbatons in France, where Ashley had gone in her youth. Nevertheless when she received the letter, she was overjoyed and almost immediately went off to Diagon Alley with her father to pick out her equipment she'd need for her first year at the school, where she got her 7" Cherry Wand, with a Unicorn Hair Core

Her first year at school was rather uneventful. She'd had a bad start to Potions but improved, enjoyed flying, and did her best. She didn't make any friends, though did make some enemies. Her second and third were similarly rather quiet, yet her 4th year was horrible. Her father left, her mother was ill, and her grandfather had dementia. With her sister staying in case, Victoria now lives alone in the mansion, her mother and grandfather having both passed, with her Father still missing.

Victoria is a smart girl for her age due to her upbringing, studying often and for long hours in her family's library. However, this is also a negative for her, as she finds herself overworked often by early mornings and late nights. She's resourceful and cunning, able to manipulate events to come to the outcome she wants. She's rather kind to those who get to know her, but due to her struggling to trust others, masks with a veil of sarcasm, often making fun of others, whether she means it or not, which leaves her rather alone most of the time, so she seldom opens herself to others. With how horrible her fourth and fifth years were, this veil of sarcasm has only grown.

She, as shown by the picture, has blonde hair and blue eyes, and takes after her mother in a lot of aspects, aside from her eyes, which she gets from her father.

Her camera, because she loves taking pictures of the world.

Her art-set, for the same reasons as number two, she loves to draw the world around her.

Her PS2, as though it doesn't work at hogwarts, at home, it's a way to relax and remember her childhood.

Her MP3, as while slightly out of date with today's phones, holds a lot of her favourite music tracks that help her to relax while drawing. 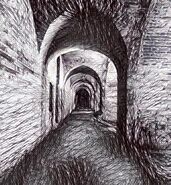 Victoria's Sketch of one of the Dungeon Corriders, Drawn while talking to Vinzent Maas
Add a photo to this gallery

Retrieved from "https://dumbledoresarmyroleplay.fandom.com/wiki/Victoria_Faye?oldid=1071720"
Community content is available under CC-BY-SA unless otherwise noted.