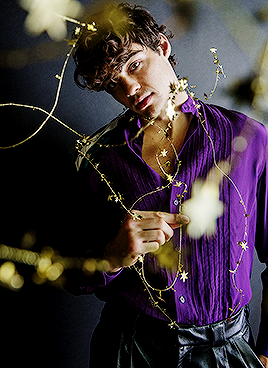 Renly is a mixture of i'm here for a good time not a long time, big dick energy and big dumb bitch energy. Whilst he doesn't run short in street smarts, and is perfectly good as picking up on social cues and even picking up on people's emotions (when he, you know, wants), he lacks actual academic smarts. He's good at putting everything he learns into practice, but he has always been very bad at the theory of it all. It just doesn't come as naturally as other things. Luckily, though, he has become quite good at adapting to his environment. He doesn't usually let any obstacles deter him, and takes things as they are at face value. He busts his nut and works hard to play hard, whatever the cost.

Renly is the kind of guy people actually want to hang with. While he has his shortcomings, as every person does, he always strives to become better. He can sometimes be blunt and thus an asshole, but he usually means well, much like sometimes he can say certain things that may seem 'supremacist', when in truth, it can only be attributed to not being exposed to different backgrounds. He understands he has some ways to go, but he always puts in the effort to learn and grow. Nevertheless, as much of a long road ahead of him as he's got, he's actually... pretty decent at giving advice. Definitely not the best at following it - maybe his life wouldn't be so messy if he was - but definitely pretty good at giving it.

Knowing he's got people to fall back on if things go wrong, Renly has always been very laidback. He rarely stresses about things and just goes with the flow. Why should he freak about something that he knows he can probably take care of? (Or call his grandparents to take care of, to be honest. Sometimes you just have to take advantage of what you got.) Thus, he tends to be very careless, lest it's related to his business - and even then, it's a very thin line. He's always down for a good laugh and usually makes more time to play than he does to work - he's always been very active and led a very promiscuous lifestyle. He won't always be young and always strives to make sure he won't hit 30, start balding, and end up regretting everything he didn't do.

Perhaps the best part about being the son of who is arguably the most rebellious of all Sacred 28 children is that there were no expectations growing up. Wentworth Alexander IV - or Renly, as he often preferred to be addressed by - was the son of Wentworth Alexander III and Wilhelmina Crouch. Set up by their parents, they were a couple destined to rule the country together. Except it wasn't what they wanted. Staunchly against their parents' beliefs, they sought peace and equality above all else. They preferred to lead a different life, one where they could be who they wanted and not worry about what their parents wanted for them. While they hoped for the best, they braced for the worst as they made their first decision as a couple: to buy a run-down warehouse. Why? It was on the forefront of their relatives' minds. They could aspire for greatness, and here they were, doing what?

As it turns out, the duo had decided to open their own nightclub in Hogsmeade, as a means to bring life to the little village. And, as time progressed, they realized it had been exactly what the little village needed. However, their parents didn't see it this way, and were expectedly enraged by the couple's decisions. Even more so when it surfaced that, at the meek age of 19, they were expecting their first child: a girl they decided to name Gianna Glaudette. Fortunate for the duo, because they were set to get married just some short months after her conception, they were able to pass the child as a honeymoon baby - even if there were suspicions. Neither family was very happy with them by then, but they had stayed true to their wishes despite all else. Perhaps that's why Renly's father wasn't written out of his father's will.

Renly was the couple's second child and only son. Whilst several daughters followed his birth - two, four and six years after his own - no child quite lived up to Wentworth and Wilhelmina's legacy like Renly did. He knew from the start he probably wouldn't amount to anything; he wasn't as brilliant as Gianna, as talented as Chantelle, as clever as Marianne, or as ambitious as Cordelia. Though some might consider it a misfortune, Renly embraced this, because he had something he strongly believed his sisters lacked: the good looks. Don't get him wrong, he adores his sister as much as he finds them annoying - he's just the hot Fawley. Can't blame him, it's facts. And so, growing up, he found it easy not to resent them for getting the good grades, the paintings on the fridge, or rewards for good deeds here and there. He was content with being Renly Fawley, the cute one.

Despite being related to families known for their cruelty above all else, Renly led a very idyllic life. His parents kept him and his sisters out of the spotlight, and as it turned out, it was the right decision to make. They had a nice house in the outskirts of Hogsmeade, and had a great influx of money as the nightclub prospered. He attended muggle primary, unlike the rest of his cousins, while maintaining a good image by attending private practices for quidditch. And, though illegal, he and his sisters also got away with controlled underage magic. Perhaps it was because his grandparents paid the aurors off, perhaps it was because they did it in an area only accessed by wizards, but all Renly knew was that he could use his wand come age eight, years before he was supposed to. And in truth, it worked out in his favor more than he could ever imagine.

When he was at Hogwarts, it was initially very rough for Renly to find his place. He was a cute kid and the girls loved him - the teachers even more - but he wasn't very impressive academically, and struggled to fit in with every group - even with the quidditch players. He struggled to understand why until his third year, when a fellow Hufflepuff opened the school's dueling club. He was, and would always be, among the best duelists to ever play for Hogwarts. He was quick with his wand and was much better putting spells into play than to learn the theory behind them. It was a startling discovery, but it clicked so well, Renly found himself quickly rising to the top of the social pyramid, garnering the attention of students in all years. It's no lie Renly ate up this attention. It was more than he'd ever gotten from his parents, as well-meaning as they were. And thus, his last few years at Hogwarts went by in the blink of an eye. He didn't make prefect or Head Boy, but it's not like he wanted it, or that it would help him progress in life.

When he graduated Hogwarts, Renly did what he thought was best for him: join the aurors. Except, he didn't achieve the necessary marks in his NEWTs. Rejected by the force, a dejected Renly then turned to a new career: business management. It took a lot of persuading, but he was able to get from his parents the fund he needed to buy La Lune Bleue. It was a business with potential, and he was sure he could bring more to it. He'd have a big debt to pay off to his parents, but he was certain it would play out in his favor eventually.

WIP
Add a photo to this gallery
Retrieved from "https://dumbledoresarmyroleplay.fandom.com/wiki/Wentworth_Fawley_IV?oldid=1045020"
Community content is available under CC-BY-SA unless otherwise noted.