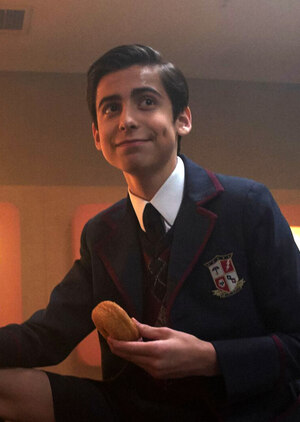 ⋇⋆✦⋆⋇
"I'm trying to bore a hole in your head that's deep enough for my scolding to reach your level of understanding. But for now, enjoy tottering on that bootleg attitude of yours. Thank me later when you finally grow a spine that can hold your puny self together."

Parental neglect turned Wiccan into a sardonic sourpuss at a young age. Save for his grandmother, Caiohme, he has some trouble placing his faith on adults that try to care for him. He’s particularly apprehensive at the idea of people acting on their problems when it’s already too late. As a preemptive measure, he resorts to brutally honest and unsolicited comments. He will not spare any second thought. Should he hold back his remarks--which he rarely does--his facial expressions will say it all. His pistol for a mouth, however, can shoot painful bullets of tactlessness. Nonetheless, the upside of all this is that he has a knack for attracting people that need his unfiltered, sincere, and impartial opinion.

Beyond this audacious attitude, he is astutely observant and assertive. He loathes getting bogged down by hesitation. When there’s an opportunity to speak out, he will do so with ferociousness and veracity. He’s not one to volley a streak of empty words. He injects enough substance into them to prove his point clearly and thoroughly. He’s also known for his cynical, witty, and sometimes dark humor, which can come off as either obnoxious or just plain comical. It is for these reasons that he has some difficulty in forming new relationships. Likewise, crossing Wiccan is no knee-slapper. Any affront inflicted against him or his friends compels him to direct confrontations and long standing grudges.

⋇⋆✦⋆⋇
"Here's the rub: My trust issues come from a father that knows his spooky druids more than me and a mom that can't give enough Tylenol for my sore childhood."

Renowned celticist Lanchester le Fay had an exceptional reputation in Maynooth University for his contributions to the discipline. Unbeknownst to his students, admirers, and colleagues, a large part of his achievements were owed to his magical blood. However, he was born a squib. So instead of studying at Hogwarts, he directed his time and attention on studying Celtic culture, particularly on its magico-religious traditions. At one point, he was invited to lecture on Celtic mythology to a class of sixth years in Hogwarts. His extensive knowledge on his field allowed for a few more trips to his dream school.

Lanchester eventually married Celeste Bradbury, a Muggle native of Galway and a pharmacist in Merlin Park University Hospital. They married in their late twenties but they had yet to conceive a child in their early thirties. At hope’s end, the couple sought help from the hospital that Celeste worked in. They were given the option of in vitro fertilization to which they readily agreed to. In the nine long months that transpired after the procedure, they were wrought with anxiety and toil. Celeste had a high-risk pregnancy and the chance of miscarriage was high. Although she was bedridden for most of the time, Lanchester’s squib mother, Caiomhe, was there to care for her in the expectant father’s absence.

Sometime in her third trimester, Celeste experienced inexplicable pain and profuse bleeding while she was alone in their home. Thinking that she was only resting, Lanchester and Caiomhe came home a little bit late to witness the woman bathing in her own blood and screams for help. It was apparent that she couldn’t make it to the hospital. With no time to spare, Lanchester called for their neighbor, a healer witch named Sybil. With a few incantations and swishes of her wand, Celeste was saved from imminent death. The ordeal, however, gave away the le Fay Family’s long-hidden secret. It took Celeste a few weeks to process all of the information that she needed to digest. But it was suffice to say that her skeptical mind was finally cleared with understanding, although she still found everything to be foreign and, at times, terrifying. Eventually, she gave birth to their test tube baby, an infant boy with striking green eyes that seemed to spark with energy. In memoriam of the miraculous event that saved the boy from being miscarried, the parents named him Wiccan Endor, after the modern pagan movement and the witch in the First Book of Samuel, respectively.

For what seemed like a decade, the le Fays were back to their usual lives. Lanchester was on his way to being tenured in Maynooth. As such, he poured more of his time to teaching, administrative, and research functions. Celeste, on the other hand, stayed at home for a few months to recover from her perilous pregnancy before working again in the hospital. While they were away for work, Caiomhe was in charge of looking after Wiccan. Because of this, the young boy had a strong and affectionate relationship with his grandmother. She would cook his favorite meals and tell him all about Celtic myths and legends at bedtime. It goes without saying that he was closer to her than his own parents.

The following years proved to be a tad bit more difficult for the parents and child’s relationship. Lanchester became more and more busy with his academic work. There were many instances that he left their home for fieldwork in some other area of the British Isles. It took him days, weeks, and even months to come back that Wiccan lost count. Meanwhile, Celeste had to work longer shifts in the hospital to make means end. Fortunately, Wiccan had friends in primary school to keep him company in the day and Caiomhe in the night. The lack of parental attentiveness, however, still gave him a penchant for mischief or any other manner that could draw his parents’ attention back to him.

In St. Patrick’s Day, the le Fays gathered as a whole for the first time in four years. The eight-year old Wiccan thought that his insidiously frosting heart would be thawed out. Much to his chagrin, he was met with a salvo of criticisms for his unruly behavior in school. Lanchester and Celeste had indeed changed throughout the years. Their neglect stemmed from the inability to juggle work and parenting effectively, given that Celeste’s pregnancy strained their professional roles significantly. In addition, they became too reliant on Caiomhe’s ability to fill in the gap that they have been lacking. Of course, they were unaware of such gap. They were confident that Wiccan would grow normally as long as someone provided (them) and cared (Caiomhe) for him.

The relentless chastising further rubbed more salt to the wound of the parent-child relationship. Reaching the maximum of emotional stress, Wiccan caused the nearby light bulbs to burst like firecrackers of glass. The other family members were dumbfounded. Not one soul in the household believed that the boy possessed any magical ability. After all, Lanchester and Caiomhe were squibs while Celeste was a Muggle through and through. That single incident drilled deep into the stone-hard heads of the parents and made them realize how faulty their parenting was.

Lanchester and Celeste’s metanoia that followed that fateful night was merely five band-aids plastered on a big crack in the wall. The sudden shower of affection just made Wiccan distrustful of their actions. He would occasionally take advantage of their doting to get what he wanted, such as an extra allowance or additional playtime at school. His misdemeanors, on the other hand, were toned down so as to not trigger what happened in St. Patrick’s Day. With all that was said and done, the parents and Wiccan maintained a one-way combative relationship. It was the latter’s turn to reproach their behavior.

Wiccan’s first manifestation of magical ability back then also prompted Lanchester to prepare him for Hogwarts. In all honesty, the juvenile was excited to vamoose from his bleak life in Galway. This was why when his letter arrived sometime after his eleventh birthday, he was near ecstatic. The Sorting Hat initially had trouble in placing him to a house. It spent three and a half minutes deciding between Gryffindor and Slytherin until the impatient Wiccan intervened. He insisted on the former out of impulse. As such, he was sorted into Gryffindor House. He is now on his fourth year of magical education.

Retrieved from "https://dumbledoresarmyroleplay.fandom.com/wiki/Wiccan_le_Fay?oldid=1055736"
Community content is available under CC-BY-SA unless otherwise noted.