Ultimately, Wren isn't the person you'd imagine to be looking to join a notorious gang. He is, by personality, too nice for it. He's known to put others' needs before his own and doesn't mind helping someone if they really need it. Generally, he's friendly and has good social skills because of it, being the extrovert in the family compared to his introverted siblings. He is definitely of the mindset that if you help others then they'll be more than willing to help you when you need it, something he's had since he was young. He likes to make people laugh and certainly enjoys teaching others about the most effective combat spells.

However, don't let Wren's immediate personality fool you. Wren is just as cunning as he is nice; he knows how to get what he wants and persuasion is one of his biggest strengths. There have been countless times where Wren has gotten his way without the other party even knowing that they were being manipulated. An extremely vengeful individual, Wren will stop at nothing to make sure he is atoned for any wrongdoings against him. Although his sharp-wit is often used for jokes and banter, it can just as easily be used to verbally abuse someone.

Moreover, Wren is just a rebellious individual. The trauma of seeing his father murder his mother has broken him and has left him with a degree of emotional instability; he's prone to outbursts of anger and would much rather conceal all over emotions bottled up. To those who truly know him, they might have some insight of just how effected he is by his mother's death but to others they might just see an optimistic individual with a bad temper problem. Wren lacks a lot of sympathy; nobody was particularly sympathetic to him about his mother's death (mostly because the people who he interacted with immediately after were his father's colleagues who had bad ties with her and her company) so he firmly believes that nobody deserves his own sympathy. His apathy extends into his other emotions; a large amount of the time he just doesn't care how his words are received and believes that it's down to the other person to be insulted or not by what he says - as he likes to say "words mean nothing, it's just your perception."

Alden Berkhart always had a niche for causing trouble - actively choosing the messy route ever since he could consciously make decisions. If there was a way he could ruin something, it'd be ruined and to an un-salvageable point at that. The amount of times he was threatened with expulsion from Hogwarts was extraordinary, perhaps a record, but Alden always had a system. He'd cause enough trouble to be threatened and, once receiving the threat, would shape up before causing trouble again but because the way he shaped up was so undeniably remarkable, it made professors not want to give up on him and thus ensured he stayed time and time again. Really, it was no surprise to anyone that he had joined the Serpents. In fact, quite a lot of his parents' friends warned them of the possibility.

Something that was shocking, however, was the fact he was able to bag himself a nice muggle girl of the name Georgina. She never knew of his criminal life, nor his magical life, but that was down to Alden's ways with words, convincing her that his countless times away were due to familial commitments and, perhaps stupidly, Georgina believed him every single time. Within a few years of meeting one another the two were married and kids came in succession. First was Buford, then Lorena and then the clan being rounded up by baby Wren. The first two siblings, visually, took after their father whilst Wren took after his mother. Alden once said that if any of his kids was to be a squib, it'd be Wren on the basis that he looked so much like his mother and her muggleness would shine through.

For a while after Wren's birth, the family lived a good life; Alden was genuinely in love with Georgina; Georgina was working her dream muggle job and all three of their kids were getting along. Though he had chosen the life of crime, Alden was happy to see none of his kids gravitate towards causing trouble so soon in their lives - he wasn't sure he could handle fathering a kid that was so rambunctious as he was. Becoming a father, Alden became increasingly concerned with separating his wizarding life of crime to his married life where he was believed to be a muggle. Anything magical happened only in his presence and that was the greatest bit of luck he could've been given.

Each of the kids had a sphere of curiousness - Buford with sports, Lorena with science and Wren with a general curiousness for the world. For each of them, it'd be in there spheres that they'd have their first magical experiences, usually around the age of six. Wren's in particular came about when he managed to make a plant plot levitate just by looking at it after an argument with his older brother about who's turn it was to watch TV. Telling his dad not only gave little Wren some reassurance that it was okay that he broke a plant pot, but also took away the fear of not having three magical children on Alden's part.

Perhaps it was Alden's genuine love for Georgina that made his final mission with the Serpents his hardest one yet. The muggle company that Georgina worked for prohibited over time the amount of flexibility that the gang had in certain areas of crime. His job was simple - as Georgina was the aspiring head of the company, all he had to do was get her to leave the company for good. It was known how much he loved her and to get him to kill her and lose him as a member was a risk nobody wanted to take. Except, that's exactly what happened. Alden's suggestions of her leaving turned into an argument that went from verbal to physical and ended with the revelation that he was a member of the gang she knew something about being the last thing Georgina ever learnt. Alden had killed his wife and Wren, only nine-years-old, was there to witness it all.

Although Alden never gave up on his kids, moving them to a wizarding village some way aways from their original home in London and cutting a lot of his immediate ties with the Serpents, Wren never trusted his father again. Likewise, Alden could never look at his younger child, the one that resembled his wife so much, without feeling guilty over the mess that had transpired.

One by one, the Berkhart kids went off to Hogwarts where they'd mix with the other children of Alden's generation of Serpents - a thing he was worried about. Buford got sorted into Slytherin and Lorena in Hufflepuff. Both were model students and were able to leave Hogwarts with good grades, each having held the titles of Prefects and defying their father's expectations of them. You see, Alden always retained that if one of his children was to join the Serpents it'd be one of the older two, not Wren, the one nobody expected.

When Wren began attending Hogwarts and was sorted into Slytherin, it was the first time he had heard about the gang that his father was allegedly a notorious member of. It was through titbits of information that he came to find out why his mother had died and how his father always retained that Wren had a softness about him. Seeing his mother die in front of him, however, did break Wren. Throughout his first few years at Hogwarts, he had done his hardest to master as many offensive spells as possible so, come sixth year, Wren became arguably one of the best in his year at producing offensive spells. From charms to hexes, his proficiency with offence seemed limitless. Which is where he stands today; still being the last of the Berkhart children that people would expect to express a serious interest in joining the gang his father was once a part of, but being the most dangerous of the three and being the perfect fit for it. 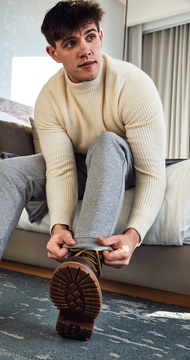 Retrieved from "https://dumbledoresarmyroleplay.fandom.com/wiki/Wren_Berkhart?oldid=1003577"
Community content is available under CC-BY-SA unless otherwise noted.