This character has been requested to be preserved by Kaneity.

This Character Belongs To Kane

Yvonne Zwissig is the only daughter of Kreshnika and Liridon Zwissig, a Swiss couple, older sister of Endrit Zwissig and niece of Dustfinger. Born on 8th October in Schaffhausen, Switzerland, she was raised like most children in a boring, stable fashion. Her first magical act was stopping a drop of milk from hitting the carpet aged five.

Yvonne's first language was Swiss German, being from a German-speaking part of Switzerland, and she soon learned English and Swiss French afterwards, as was mandatory at her home. She always admired her mother, a successful wizarding author, as well as, but not as much, her father, a general in the muggle Swiss Army. Naturally, she was given a Swiss Army knife to commemorate his promotion when she was 5.

Yvonne is naturally blonde, but often uses a colour-changing charm on her hair to make it dark.

Yvonne is charismatic, to put it simply. She loves making friends, but also can be cold and calculating. As a child, she was always fascinated by the world and the way it worked with magic, and this curiosity remains in her teens. She can be sarcastic, and generally makes assumptions on the personalities of others quickly. She is rather naive. 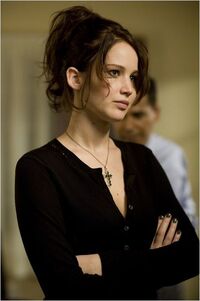 Retrieved from "https://dumbledoresarmyroleplay.fandom.com/wiki/Yvonne_Zwissig?oldid=650904"
Community content is available under CC-BY-SA unless otherwise noted.