Zelda is very much a happy-go-lucky individual who rarely lets things get her down. Known for getting back up after being knocked down, there's a certain resilience to her that is hard to ignore. She'll very happily try something again and again until she gets it right, much like she'll do things constantly to prove people wrong. Zelda possesses a finesse for sarcastic humour, having honed it from her one father, Fabian. Although her tongue might not be as quick as his, she definitely has inherited his wit and can be pretty good with her words. She likes to consider herself funny but knows that her humour might not be the taste of everyone's. One hallmark of Zelda is her 'can do' attitude towards everything. Bursting with optimism, there's not a challenge that she won't throw herself into. Sure she succeeds at some things and fails at others but, for her, it's the experience in taking part that counts. If she can learn something from an experience then she feels like it's a worthy one to have. One quirk of Zelda's is her sentimentality. Wanting to remember everything that's ever happened to her, Zelda is the proud owner of a ton of journals, scrapbooks full of moving polaroids and even a few recordings of the episodes of Keeping Up With The Schmidts that she's on. If anything evokes a positive memory for her, Zelda wants to keep it. She even has some mementos from some bad memories too - like a rock that she nearly smashed her head into after being caught up in a current at the sea behind the family home.

Perhaps one of Zelda's largest faults in her personality is how she handles failure after putting herself up on a pedastal due to her personal high self-expectation. Although, yes, she accepts failures for what they are, it doesn't remove the disappointment she feels in herself when she does fail. Wanting to be as perfect as she can be - as perfect as she feels she should be as the daughter of Fabian and Edmund Lleo-Schmidt - Zelda rarely accepts anything less than what she believes to be her best. That being said, Zelda chooses to handle her negative emotions in the same way she does her good memories - documenting them and keeping them. With a set of journals charmed to erase the words after time, Zelda will often vent into one of her many journals and let the words disappear over time - subtly signifying her getting over it. Or, at the very least, she likes to think so. Known to get a little quiet when something is on her mind, it isn't hard to tell when Zelda is in a bad mood. Easily readable like a book, her sadness, anger and fear can be detected easily.

Two Quidditch superstars falling in love and getting married sounds like a media dream come true, right? That was what happened to one Montrose Magpies Beater, Fabian Lleo, and one Caerphilly Catapults Chaser, Edmund Schmidt, got together. Somewhere in between a whirlwind romance and a slow burning love, the two Quidditch stars eventually settled down together and coined a new family name that was unique to them - Lleo-Schmidt. With a cute house on the beachfront, life seemed promising for the two Keeping Up With The Schmidts stars.

The issue of children had always plagued their minds, it being a topic brought up early on into their marriage. There was a level of understanding that they both wanted them but the method was unclear. One wanted to adopt and the other deemed the new, experimental muggle gene splicing techniques to be much more ideal. Eventually it was settled that they'd do both; adopt a child and also go about having a biological child of their own. The latter, having been carried by a surrogate for nine months, happened to be a little girl that they named Zelda. Zelda Alicia Emily Lleo-Schmidt. A mouthful, maybe, but a name that the media would remember nonetheless.

Despite her fathers' sports fame, Zelda grew up in a surprising amount of obscurity compared to other children in her position. Sure the media got glimpses of her from time to time as she attended events with her parents but, beyond that, very little was known about the Lleo-Schmidt's eldest daughter. Some would say that perhaps Zelda never minded but, in reality, she never knew any different. She knew what fame her one family came from - the reruns of Keeping Up With The Schmidts were some things she had come to dread - but never had she envied it. In hindsight she'd look back and determine it came from never gaining anything from it - her life was good without the fame and she failed to see how it could make it better. Maybe it wouldn't have been that eloquently put down when she was a child but, in general, that was the mood.

In any case, when Zelda was seven years-old she had her first magical experience. It was a very simple experience - levitating some shells on the beach behind the family home - but it was enough for her life to be pushed more into the magical direction. Where prior she hadn't been allowed to do certain things out of fear that she wasn't a witch, Zelda was able to begin helping her fathers with certain magical elements. By seven and a half, Zelda was riding a broom with a natural affinity; something she no doubt inherited from both of her fathers. In a matter of months, Zelda was as involved as any other child of two pure-bloods, having quickly made up lost time on the more muggle-oriented education she had just in case she ended up being a Squib.

As boring as it is to say of a child of two celebrity, professional Quidditch players, Zelda's life remained quite quiet. Although she made a few appearances on Keeping Up With The Schmidts following her magical experience and became known as 'Edmund's Demure Daughter,' Zelda remained firmly out of the spotlight. Instead she devoted time to learning more about magic... a large of that being, of course, playing Quidditch. Labelled a prodigy by her fathers, from early on Zelda decided she wanted to be involved with Quidditch somehow. With big aspirations in mind, it was a surprise to nobody that Zelda announced her intentions of being a Hogwarts Quidditch star at the family dinner table the night she got her letter to Hogwarts.

Having been sorted into Gryffindor in First Year, Zelda's on a path to follow her fathers' footsteps and fill their shoes; all four of them. 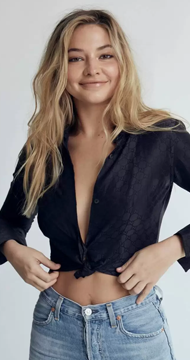 Retrieved from "https://dumbledoresarmyroleplay.fandom.com/wiki/Zelda_Lleo-Schmidt?oldid=1094671"
Community content is available under CC-BY-SA unless otherwise noted.